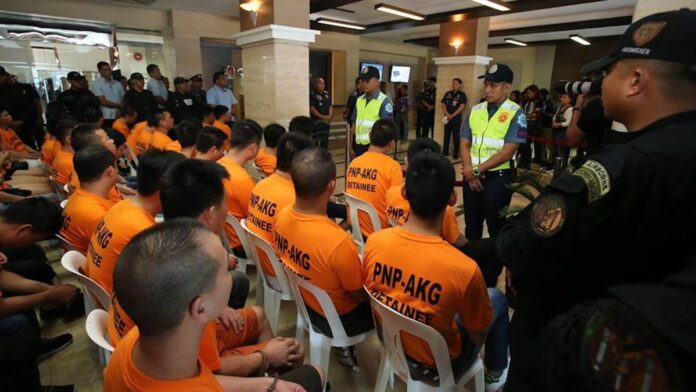 Chinese women are reportedly being targeted in a new wave of gambling-related kidnappings in the Philippines, alarming Beijing’s diplomats in Manila and the local Filipino Chinese community. The Philippine Daily Inquirer reported that the Chinese Embassy has also investigated and verified specific cases to protect the legitimate rights and interests of Chinese citizens in the country. The victims are “mostly Chinese women, and recently Cambodian and Vietnamese,” said Teresita Ang-See, founding president of the Movement for the Restoration of Peace and Order (MRPO).

Several organized crime syndicates focusing exclusively on kidnappings for ransom operate in and around the National Capital Region. Some criminal groups target workers or customers of Philippine Offshore Gaming Operators (POGOs), Chinese nationals, East and South Asian expatriates, short-term travelers, and members of the Chinese-Filipino business community and their families. Criminal abductions of Westerners occur less frequently, though the threat remains. Most victims are rescued by authorities or released unharmed relatively quickly after the abductors receive a ransom payment.

In the past three years, the Philippines has emerged as a major hub for online gaming, according to Filipino officials, attracting more than 100,000 Chinese nationals who work in virtual casinos catering to players back in China where gambling is illegal. The online casinos generate tax revenue and desperately needed jobs in Manila’s crowded downtown area. But at the same time, they’ve pushed up rents and created new challenges for the Philippine National Police. Online gaming platforms allow players to gamble remotely. They sign up, choose a game and it is played over a live stream in another jurisdiction.

Manila has become the number one hotspot worldwide for online gaming, ahead of Malta, the Isle of Man and Curacao, according to David Lee, a lawyer at Taiwanese firm Lin & Partners who specializes in gaming laws. “The Philippines pioneered online casinos in the early 2000s, when Cagayan, a province to the north of the country, started awarding licenses to a handful of operators,” explains Ben Lee, the founder of GamiX, a Macao-based consultancy firm focused on the gaming industry in Asia. “But they really took off in 2016, when President Rodrigo Duterte came into office.”

Duterte handed the right to issue offshore gambling licenses to the Philippine Amusement and Gaming Corporation (PAGCOR), a government entity that operates casinos and regulates the industry. “It began to aggressively develop the industry by awarding dozens of licenses,” said lawyer David Lee. Chinese businessmen were quick to seize the opportunity and the number of POGOs mushroomed. Last November, Manila expelled hundreds of Chinese nationals who had been arrested in a series of raids against online gaming operations and other cyber-crimes in Palawan province, for allegedly working illegally in the country, according to CNN Philippines.

Many Chinese nationals working in the Philippine casino industry are attracted by the promise of jobs not available at home, experts say. “These are mostly young people, in their 20s, with little job prospects in China,” said Ben Lee. Some are lured to the Philippines with the promise of high-paying jobs in prestigious tech companies, but upon arrival they discover they will be working for an online gambling platform and paid a fraction of what they were promised, he added. “The workers frequently have their passports confiscated, are crammed 10 to a room meant for three to four people and have to work 12-hour shifts, with only one day off per month,” said Pitlo. On the job, they are expected to approach prospective players in social media chat groups and convince them to give online gaming a try, according to Lee. Once players are hooked, they are encouraged to wager increasing amounts of money, he added. POGOs cater to foreign customers and thus employ foreign nationals as customer service representatives to “effectively invite players and attend to their needs and concerns,” the PAGCOR spokeswoman said. Most of these foreigners are Chinese nationals, she said. “But we can’t categorically say they are based in China or are targeting players in China,” she added. “They might be catering to Mandarin-speaking people in other countries

The worst areas of kidnapping are now concentrated in Makati and Pasay, as these two places have a large number of gaming parks and homes, such as 1322, TechZone, and some bars popular with Chinese people. As long as you dare to step out of your house, the chance of being randomly kidnapped in the street is very high.

“In their free time, their Chinese employees often gamble at the casinos and end up in debt,” explained Elmer Cereno, a spokesman for the Philippine National Police-Anti Kidnapping Group. “They are then approached by loan sharks who offer to lend them money. “When they fail to pay it back, the loan sharks kidnap them and try to get ransom from their relatives back home, ” he said.

In October 2019, police rescued two Chinese POGO workers, whose families had been asked to pay ransoms ranging between 68,000 yuan and 80,000 yuan (about $9,800 to $11,500) for their release, according to a summary of the case seen by CNN. They had been abducted from a hotel six days earlier and held by five Chinese nationals in an office building in Taguig, a suburb south of Manila.

Between January 2017 and October 2019, Philippine police dealt with 65 cases of kidnap-for-ransom involving POGO workers or casino customers, leading to the arrests of 132 people, according to an official tally provided to CNN by the Philippines police.

“Almost all the victims and perpetrators were Chinese nationals,” said Cereno. Manila has its own concerns about the industry, with top officials suggesting that the influx of Chinese workers could turn to spying, posing a risk to national security. “You would also start getting worried when a whole building, a condominium tower, is occupied by only one nationality where you might not be able to guard their activities,” Philippine National Security Adviser Hermogenes Esperon, Jr, said in July 2019.

The recent kidnapping cases led by Chinese are getting worse and worse. A Chinese national who is working in Philippine just released a guess how much to kidnap a Filipino Chinese to remind everyone to be wary of being used as a “walking peso”; Unexpectedly, because of the incentive of the high kidnapping reward, these scum without convergence, but intensified, is bound.

The worst areas of kidnapping are now concentrated in Makati and Pasay, as these two places have a large number of gaming parks and homes, such as 1322, TechZone, and some bars popular with Chinese people. As long as you dare to step out of your house, the chance of being randomly kidnapped in the street is very high.

Some abductees said they were scared to escape: “On July 22, I am Angelina, angel city is in the van slammed to a car, get in the car after I had a meal with blindfold my eyes, with handcuffs handcuff me, after 15 minutes I was taken to a village, in after they took me 80000 pesos, and my We Chat borrow money from friends and relatives, with my pay treasure to loans, After two days of signed, they persecute me and forced me to record video to their borrowing 1 million yuan for commercial turnover, he ask my family to 1 million yuan, with a gun on my head, my family have got 560,000 yuan, the last is powerless, they open video beat me in front of my family, If you don’t pay off a million dollars, 100,000 for one hand.” There have been more than one victim who broke the news, kidnappers from the northeast, Hunan, we do not say that the region is black, but vigilance is better! Now in the Philippines, no Chinese can be trusted. The Chinese Embassy in Manila urged Philippine agencies to strengthen law enforcement. It also reminded Chinese citizens to “stay away from immoral activities” and avoid online gambling and telecom fraud.

Facebook
Twitter
Linkedin
WhatsApp
Email
Previous article
Too little, too late?
Next article
Pakistan to be among largest economies in world by 2075: Goldman Sachs

January 27, 2023
Melbourne: A rampant Novak Djokovic surged into a 10th Australian Open final Friday to close in on a record-equalling 22nd Grand Slam crown, with...