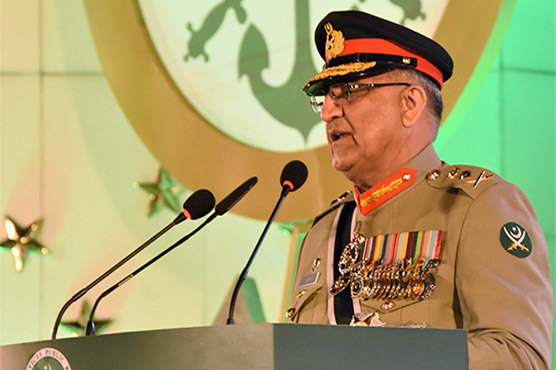 Gen Qamar Javed Bajwa who had been appointed as Chief of Army Staff in November 28, 2016, will retire on November 29, this year. Under his supervision and command, we need to highlight Pakistan Army’s achievements in the last six years.

One of the most important achievements of General Bajwa is that under his command, Pakistan’s security agencies, especially the Pakistan Army, habe been successfully coping with hybrid war, or fifth-generation warfare.

In April 2018, General Bajwa said that hybrid war had been imposed on Pakistan to internally weaken i.“Our enemies are trying to weaken our resolve by weakening us from within.”

In fact, besides some other US-led Western countries, including Israel and particularly India, are waging a hybrid war against Pakistan. This is also due to the fact that the latter is the only nuclear country in the Islamic world.

As part of anti-Pakistan and anti-Muslim policies, the Indian extremist government of the fanatic Prime Minister Narendra Modi, the leader of the biased ruling party BJP, is acting upon the ideology of Hindutva ((Hindu Nationalism). Their various malicious moves such as persecution of religious minorities, especially Muslims, demographic changes in the disputed territory of the Indian Occupied Kashmir, abrogation of the articles 35A and 370 of the Constitution, which gave a special status to the Indian Occupied Kashmir, bifurcation of Jammu and Kashmir into two union territories, of Jammu and Kashmir and of Ladakh, to be ruled by the federal government, strict military lockdown and deployment of more than 900,000 troops there, and martyrdom of tens of thousands of the Kashmiris are notable.

Indian forces had also intensified shelling inside the Pakistani side of Kashmir by violating the ceasefire agreement across the Line of Control (LoC) and compelled the Pakistan Army to give a matching reply.

However, both China and Pakistan rejected Indian illegal measures. Particularly, New Delhi had escalated tensions with Islamabad in the aftermath of the false-flag terror attack at Pulwama in Indian Occupied Kashmir. On 27 February  2019, when in response to the Indian so-called pre-emptive air strike near the town of Balakot, close to the border with Pakistan’s sector of Kashmir, Pakistan Air Force (PAF) shot down two Indian Air Force (IAF) fighter jets and launched aerial strikes at six targets in the Indian Occupied Kashmir. Pakistan’s civil and military leaders have repeatedly been pointing out that India is planning another false-flag operation. a Pulwama II, against Pakistan in order to divert attention from its internal issues and the failure of its external policy. Taking cognisance of these developments, General Bajwa has repeatedly warned India, saying: “We will respond to any aggression with full might.”

Addressing the Defence Day and Martyrs Day ceremony on 6 September 2018, General Bajwa stated: “The country passed through a very difficult phase during the past two decades…Our forces and nation have rendered sacrifices in the war against terrorism…Our houses, schools and leaders were attacked. Efforts were made to weaken us internally.” Noting that more than 70,000 Pakistanis were martyred and injured in this war (2017), the Army Chief vowed to collectively fight this menace of terrorism.

However, Pakistan’s armed forces and primary intelligence agency ISI have successfully broken the backbone of the foreign-backed terrorists. Peace has been restored in the provinces of Balochistan and Khyber Pakhtunkhwa, and in Karachi as well as in other vulnerable regions.

But, in the recent past, terrorist attacks especially in the provinces of Khyber Pakhtunkhwa and Balochistan which is a central point of the China-Pakistan Economic Corridor (CPEC), show that the CIA-led Indian RAW and Israeli Mossad are destabilizing Pakistan and want to damage the CPEC project which is part of China’s One Belt, One Road (OBOR) initiative or BRI, as Washington and New Delhi have already opposed this project.

Pakistan Army has not only been successful in uprooting the anti-state and separatist elements, but also contributed a lot in socio-economic development of Balochistan besides giving military training to the youth, while protecting mega-projects and the CPEC staff.

It is noteworthy that the Taliban fighters on 15 August 2021 entered the Afghan capital Kabul and seized power, taking control of Afghanistan. The Taliban-led government clarified that Afghan soil would not be used for any terrorist groups like Al-Qaeda, ISIS and TTP for terror attacks against neighbouring countries, including Pakistan. But, regarding some recent terror attacks, sources suggested that some militants of the TTP, which is based in Afghanistan, have entered Pakistan from Afghanistan. Hence, the military leadership has warned Kabul to check this infiltration.

Pakistan’s Ambassador to the UN Munir Akram had handed over the dossier to the UN Secretary General Antonio Guterres.

Regarding various terror assaults, the then Foreign Minister Qureshi had remarked that if the international community had taken timely notice of Islamabad’s concerns over New Delhi’s involvement in terrorist activities across Pakistan, Lahore’s Johar Town blast and several terrorist incidents in Balochistan would not have taken place.

Meanwhile, the EU DisinfoLab has continued unraveling gradually, India’s terror-network and anti-Pakistan propaganda campaign which has been operating since 2005 to discredit nations, particularly Pakistan. It aims to reinforce pro-Indian and anti-Pakistan and anti-Chinese feelings.

While under General Bajwa’s command the commencing of fencing along the Pakistan-Afghanistan border in June 2017 by the Army to improve the security situation and the near-completion of the project in 2021 is praiseworthy. And COAS General Bajwa played a key role in the merger of FATA into Khyber Pakhtunkhwa province. Afterwards, he has frequently visited some of these regions and congratulated the tribal elders and the youth,and reiterated that this mainstreaming shall facilitate bringing enduring peace, stability and socio-economic development of the long neglected and terrorism rid areas.

It is mentionable that besides Army’s other services in relation to the cronavirus pandemic, when the unprecedented deadly floods and extraordinary monsoon rains which began in June, this year destroyed lives, livelihoods and infrastructure in Pakistan’s various regions, General Bajwa himself supervised the Army’s rescue and relief operations in the affected areas. Besides the efforts of the Pakistan Navy and the Pakistan Air Force, the Army also saved the lives of thousands of individuals. The Army also provided the people of the flood-stricken areas with basic needs of life as well as safe shelter and medical treatment.

And it was due to General Bajwa’s efforts that on October 21, the Financial Action Task Force (FATF), a global money laundering and terrorism financing watchdog, removed Pakistan from a list of countries under “increased monitoring”, also known as the “grey list”, while Indian lobbying and propaganda campaign to blacklist Pakistan failed.

In this context, DG ISPR, General Iftikhar, pointed out on June 17: “Completion of FATF AML/CFT action plans by Pakistan is a great achievement…Chief of Army Staff General Qamar Javed Bajwa said that the Core Cell established at the General Headquarters (GHQ) in Rawalpindi, in addition to civil and military team, made Pakistan proud by successfully completing action plan of the Financial Action Task Force.”

Regrettably, at this juncture, several moves such as an assassination attempt on the former Prime Minister Imran Khan, Chairman of the Pakistan Tehreek-i-Insaf (PTI), on November 3, continuation of his ‘Haqeeqi Azadi’ (Real Freedom) March, his direct arrival in Rawalpindi on November 26, expected to reach Islamabad along with his supporters, demanding early elections, and the refusal of the PDM government to accept Khan’s demand. show that political entities and many media persons are moving the country towards anarchy or civil war. Reports also suggest that the government may announce a date for early elections.

Nevertheless, some third elements such as RAW or some anti-Pakistan foreign entities can again target the long march or Imran Khan to widen the gulf between Army and PDM on one side and the PTI supporters on the other, with the aim to further destabilize the country.

So, all the official and non-official entities must sign a charter of unity which is essential to pull the country out of the ongoing grave crises which are causing a greater setback to the country’s fragile economy.

The year 2019 marks the worst pandemic in the history of the world, of which the aftereffects are still very much there today. Many...
Read more

December 9, 2022
LAHORE: The Lahore High Court (LHC) was informed on Thursday that National Accountability Bureau's (NAB's) regional board had recommended closing the inquiry into the...