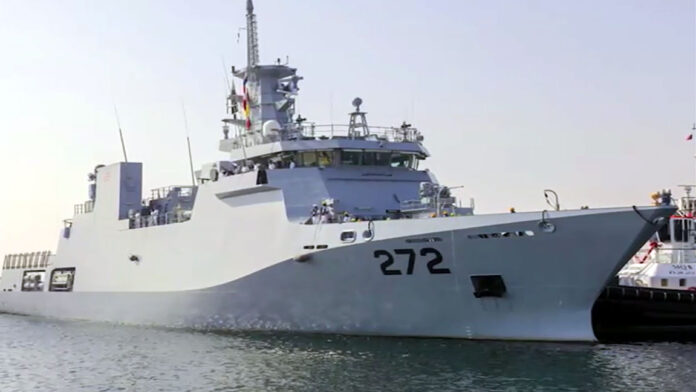 ISLAMABAD: Pakistan Navy Ship (PNS) Tabuk on Tuesday arrived at a port in Qatar to provide security assistance to the oil- and gas-rich sheikhdom hosting the FIFA World Cup.

Upon arrival, the warship was received by members of the Pakistan Embassy in the capital and port city of Doha and senior officers of the host navy, Radio Pakistan reported.

The commanding officer of the ship discussed the maritime security of the sports event during meetings with the leadership of Qatar’s navy.

A spokesperson of the navy said the development is an expression of confidence in the professionalism of the institution.

The offshore patrol vessel (OPV), built by Dutch defence company Damen, was commissioned in 2020 at Romania’s Port of Constanta.

Qatar has formally recruited security forces from 13 countries to assist local partners in ensuring a seamless World Cup, with Pakistan being the largest contributor.

Islamabad’s contingent comprises more than 4,000 military, air force and navy troops of all ranks. They make the nation the largest contributor in securing World Cup stadiums and hotels in the Middle Eastern country.

The United Kingdom, France, Germany, Italy, Jordan, Kuwait, the Palestinian Territories, Poland, Saudi Arabia, Spain, Turkey and the United States are the other contributors to the security mission.