What a man dares to do, he should dare to confess 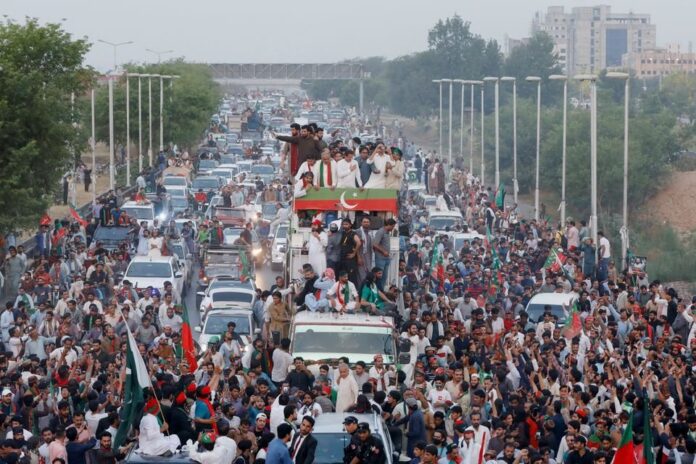 In my article titled “Haqeeqi March: Nothing for you to fear, no punishment to come” I expressed my worries that ‘the dirty, brutal, and ruthless game has entered into a deadly phase where spreading corpses in streets is very much likely.’ Alas, the dead body of innocent Muazam Ali lying in Wazirabad bazaar complained to me, why was he a victim of this game of corpses? I have no answer to respond to him. Alas, I could have been brave enough to find one and share it with his three under-aged sons covering his blood-soaked body.

The assassination attack on former Prime Minister Imran Khan in Wazirabad on Thursday was followed by his “address to Nation” on Friday evening that was followed by a statement from Inter-Service Public Relations (ISPR) of the Pakistan Army. Imran Khan in his address blamed Interior Minister Rana Sanaullah Khan, one serving Maj General (name withheld for national cause because we must not name our sons in uniforms serving sensitive intelligence agencies) and Prime Minister Mian Shabaz Sharif planned his assassination. Imran Khan claimed that he is in contact with “insiders”.

A number of journalists like me had been thinking that Imran Khan must have support or contact with insiders but we are afraid to write about this though Imran Khan himself now has indicated this.

The ISPR statement said that the baseless and irresponsible allegations by Chairman PTI (Imran Khan) against the institution and particularly a senior army officer are absolutely unacceptable and uncalled for. The statement claimed that no one will be allowed to defame the institution (Army) or its soldiers with impunity.

Imran Khan had never and would never ask permission from the Army before defaming it. He had been allowed in the past to abuse anybody he wished to. Since he was voted out in April 2022 from the PM Office, he had been slurring the Pakistan Army and its head but no action whatsoever has ever been taken against him. I believe that Imran Khan has a long history of abusing all state institutions but in past, his targets were Parliament, Constitution, and Democracy and now he has changed the “butts” while the firing range and the rifle are the same. Who would confiscate this rifle provided to him in past? That question needs an answer.

He had been behaving larger than the state, above any institution and he was portrayed as the sole honest and truthful person in Pakistan while everybody that questions him is a liar, infidel, and traitor. Just six months ago, questioning his conduct was a “state crime” so it will take time to change the psychological state of his followers as there is no “off and on” switch in the human mind.

To save the country from further social and economic disasters, we need to cease everything that can allow further divisions in our society. We need to cease the project that has resulted in unimaginable negative consequences we are facing today. Nothing is impossible if there is a will to rectify what has gone out of control.

Whatever happened in Peshawar where PTI followers jumped on a tank installed as a symbol of the armed power of the Pakistan Army near Corps Commander House and were kicking Commander’s Hatch was one of the most painful scenes a defence correspondent like me could have watched in videos appearing on the screens of Indian television channels.

When Imran Khan was coining dictions like “neutral”,  and “Janwar” (animals), a number of independent sane writers and political analysts were foreseeing that soon or later, the direct target of Imran Khan would be the institution of the Army because a number of former federal ministers of his cabinet were slowly but surely initiating the argument that the military is a privileged class, they live in separate colonies, they take special treatment in hospitals, they run separate educational institutions on the cost of public exchequer while a common Pakistani has no access to such social and administrative systems.

This discourse had been established to create hatred among the masses against the Pakistan Army and to expand the fault line in the civil-military relationship. Unfortunately, the majority sitting in cosy offices could be of the view “let him do it, he shall be handled as many had been in past”. Now we see that the enemies of Pakistan are already using Khan’s discourse.

An article I read in May 2022 titled “The Court of Public Opinion and Loaded Statements of Imran Khan” indicated that Imran Khan is (was) delivering a massive number of speeches containing objectionable discourse which in the actual legal system has no place but in the court of public opinion, he is not only rejecting all norms of authenticity and sincerity but by repeating these figurative linguistics he is altering the mind of youth that are the most vulnerable to unauthentic catchy phrases miles away from reasoning and evaluation. The writer indicated that theatrical performances (Imran’s public meetings) have all the sources of meaning-making, all forms of communication, communication with music, communication with exaggerated moments, communication with different intonations and a narrative structure having empathy, misery, valour, grandeur, and mischief.  Today, I believe the writer was absolutely right and the results now we see from the Peshawar incident can spread everywhere in the country.

Whatever has happened, it has happened and there is no reverse gear in history, so the question is what to do now? I am not a pessimist nor am I pragmatic because I am a follower of a realistic approach in life. Things are not as simple as we consider sitting in our offices and things are not as bad as the PTI is portraying. There is still hope that damage can be mitigated though it has already been done. However, the mechanism of mitigation is tiresome, treacherous, and has a high-risk factor. It is like defusing a live bomb and mine sweeping in marshland. Moreover, the process has no shortcuts and no firefighting techniques. The youth (from age 14 to 45) has been the main target group of PTI as it was demanded to make the youth disgruntled against politicians, parliament, the Constitution, and democracy, so the mitigating process must target this age group. I teach in universities so I know that both the academicians and students were deliberately prepared to follow “project Imran Khan”.

That is why the state has to work on both components of our educational system. Our youth must be taught how propaganda tools had polluted their innocent minds. The rehabilitation from the consequences of the social drug that was injected among youth to get the result of hating opponents, dividing society, encouraging intolerance, and abusing everybody that can question Imran Khan, is needed.

To save the country from further social and economic disasters, we need to cease everything that can allow further divisions in our society. We need to cease the project that has resulted in unimaginable negative consequences we are facing today. Nothing is impossible if there is a will to rectify what has gone out of control.

We all need the courage to accept the truth and we all need to admit we are no angels. Rafael Sabatini in his novel Scaramouche published in 1921, said that what a man dares to do, he should dare to confess unless he is a coward.

I hate that man like the very Gates of Death

who says one thing but hides another in his heart.– Homer