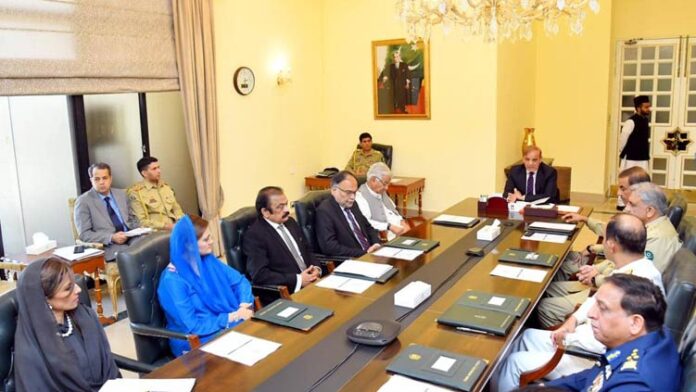 — NSC reviews law & order situation; vows to ensure security of people’s lives, property
ISLAMABAD: The civil and military leadership of the country on Friday decided to form a federal level apex committee headed by the prime minister and to reactivate the National Counter Terrorism Authority (NACTA) that would work together with the Counter Terrorism Departments (CTDs) at the provincial level to ensure maintenance of law and order situation in across country.
The decisions were taken at an extraordinary session of the National Security Committee (NSC) held here. The meeting presided over by Prime Minister Muhammad Shehbaz Sharif was also attended by federal ministers, services chiefs, heads of intelligence agencies and senior officials.
The meeting decided to again make functional the system at the federal and provincial levels for countering terrorism. The counter terrorism system would be reviewed and steps would be identified so that the system could be made more effective, the NSC decided and added that this system would closely monitor the situation and bring improvement in the counter terrorism activities.
The NSC also approved effective steps to make the security of projects of China Pakistan Economic Corridor (CPEC) foolproof. In that connection, NACTA would act as a coordinator and the provinces would implement the counter terrorism plans.
It was decided in the meeting that the counter terrorism system would be equipped with modern technology, with required upgradations. In this connection, availability of resources would be ensured and steps would also be taken for ramping up capabilities.
According to an official statement issued by the PM’s Media Wing, the meeting reviewed the overall law and order situation in the country and vowed to ensure the security of people’s lives and property at every cost.
The official handout said that the participants of the meeting vowed to reassure that the blood of every Pakistan was very precious and the law would strictly deal with every person involved in shedding the blood of any citizen of the country.
“The participants of the meeting were briefed by the officials concerned on peace and security situation in the country. The participants reiterated the pledge that the sacrifices of martyrs would not be allowed to go waste, says an official statement issued here following the meeting,” the statement added.
“The meeting declared that the nation and the state institutions were united, and had the same voice for protecting the life and property of the citizens, defence of the territorial integrity of Pakistan, rule of constitution and law, and for enforcing the writ of the state,” the statement said.
The whole nation was united with the clarity of mind on the above objectives, whose achievement would be ensured at every cost, the NSC pledged.
The meeting reviewed the incidents that undermined the law and order in different parts of the country, including Swat, condoled with the affected families, and prayed for the departed souls.
“Our citizens rendered exemplary sacrifices and played a historic role along with the brave forces in the war against terrorism.”
The attendees appreciated the role of all law enforcement institutions, including Pakistan Army, Rangers and police for establishing law and order, and for security and defence of the country, and also paid tribute to the martyred officers and jawans for the sacred cause.
The meeting was held in wake of massive protests held in Swat, Shangla and adjoining areas over the emergence of militant groups in Malakand agency and a sharp rise in the incidents of violence, extortion and threats hurled at citizens allegedly by militant groups.
In an attack on a school van, the driver of the van was martyred while several children were injured. The attack resulted into massive protests in across Swat and adjoining areas.
The participants saluted the families of the martyred and acknowledged that the martyred wrote great tales of bravery and courage, with their sacrifices.
Member of the National Assembly Mohsin Dawar and Awami National Party leader Mian Iftikhar Hussain also attended the meeting.
Facebook
Twitter
Linkedin
WhatsApp
Email
Previous article
Weekly SPI inflation down slightly to 28.44pc
Next article
Power Division seeks PM’s nod for Iesco, Lesco & Fesco BoDs reconstitution