A calamity that exposed us all

Why weren’t we ready? 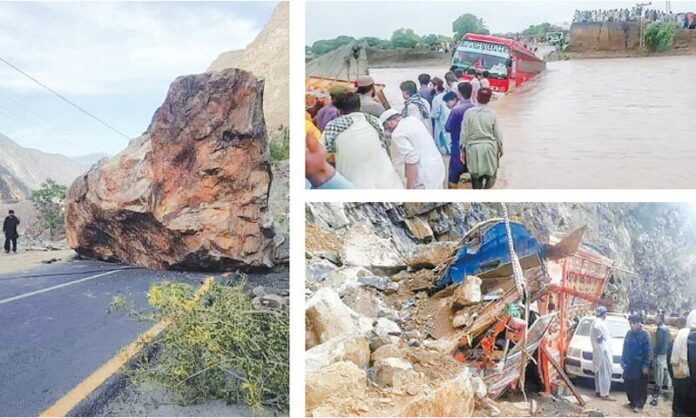 Monsoon rains in Pakistan started in Mid-June this year. The continuous rains for some two months caused floods almost all over the country, and Balochistan was hit the hardest. These floods have become the talk of the town due to the massive scale of devastation they have caused. As per the most recent updates, over 1500 people have died; 12,703 are injured, 5,735 km of roads have been destroyed, 246 bridges have been washed away or destroyed, 1,688,005 houses are destroyed, and 750,481 livestock deaths have occurred so far. Overall, some 33 million people have been affected in one way or the other. According to Reuters, Pakistan has faced a collective loss of some $30 billion. Remember, these are recorded estimates, the unregistered casualties or losses might be even higher.

Amid this devastation, a few questions are worth thinking about. Were the earthquakes of 2005 and floods of 2010 not enough to alarm the nation for future such happenings, let alone preparing for them? Did authorities take climate change seriously? Are rich nations ready to pay for the damages caused mainly because they are developing at the cost of our devastation? These are the few key critical questions this piece is based on. It tries to answer them and then define a way forward.

Unfortunately, corruption can be found in almost every segment of society in Pakistan. For instance, you can google, ‘what dams are made for?’ and it will state straight and plain, “The purpose of a dam is to impound (store) water, wastewater, or liquid borne materials for any of several reasons, such as flood control, human water supply, irrigation, livestock water supply, energy generation, containment of mine tailings, recreation, or pollution control.”

The authorities should make transparency possible in allocation of funds and facilities to the affected people. Law enforcing agencies like police should strictly monitor prices of the basic commodities in the markets so that in these hard times people should not be compelled to face price gouging. Health facilities should be provided to the people living in the camps. Every possible effort should be made by the citizens as well as the authorities to bring lives back to normal for the affected. Pakistan should suspend debt repayments. Rich nations should help Pakistan in these hard times and re-visit their carbon emission programmes, because, Secretary General Guterres rightly states, “Let’s stop sleepwalking towards the destruction of our planet by climate change. Today, it is Pakistan. Tomorrow, it could be your country.”

In contrast, 12 dams have been breached in Balochistan alone due to the floods, and the very purpose they were made for caused their breaching. The provincial government denies the allegations of sub-standard work and corruption behind breaches in dams. Sixteen bridges were also washed away, which cut Balochistan from the rest of the country.

What is more unfortunate is that prices of bread in the provincial capital Quetta, under the nose of the provincial government, rose from Rs 25 to Rs 40, somewhere Rs 50 per piece, when gas pipes were washed away and people turned to tandoors for bread. Liquefied Petroleum Gas (LPG) prices also rose some 200-400 percent. LPG per kilogramme rose from Rs 150, to Rs 400, or even Rs 500-550 at some places. When there were chances of shortage, merchants started hoarding flour.

This tells a lot about corruption in our society with inefficiency and mismanagement its by-products. Otherwise, the disasters of 2005 and 2010 would have prepared us well enough to save our people whenever such happening hit them. Hassan Aftab, a geoscientist, rightly argues in “The New Humanitarian” that post-disaster response like providing relief and funds for rebuilding houses or buying livestock is not enough. “The government needs to understand that a focus on risk reduction and resilient infrastructure development is crucial, since these disasters will get so repetitive that we won’t have the ability to respond as effectively.” People who benefit from such disasters should be brought to justice to set an example.

Pakistan witnessed 152 extreme weather events between 1999-2018 alone. An ADB analysis showed that “the socioeconomic costs of environmental degradation are considerable with climate adaptation needs ranging between $7-$14 billion per year.”

If such things were predicted, then how could the authorities not think of post-disaster management? As mentioned above, affectees are complaining about transparency and lack of assistance from the authorities. Though the federal government has launched a ‘Digital Flood Dashboard’ to ensure transparency in the allocation of funds, the grievances of the affected are more visible than their satisfaction.

According to Hassan Aftab, provincial as well as federal governments are using climate change as a scapegoat for their incompetence. It makes some sense as Pakistan has been prone to such calamities since the early 2000s, but pre and post-disaster preparations are almost invisible or not projected right, particularly in Balochistan and Sindh.

Thirdly, according to the World Bank, Pakistan emits less than one percent of global greenhouse gas, yet it is the eighth most vulnerable country to climate change. In other words, Pakistan is paying the price of developed nations` progress. In return, it merely received Rs 10 billion allocation in this year`s budget to tackle climate change.

Sara Hayat, a climate change lawyer and policy specialist, rightly argues in “The New Humanitarian” that states like Pakistan should 100 percent demand climate reparations. “The Paris Agreement does say that the developed world should finance the developing world. In that [case], Pakistan should receive more funding since we are vulnerable in a way that the Global North is not. Those responsible for climate change should take financial responsibility this time,” she adds.

Furthermore, the WHO has warned of health threats in the country as some 1,460 health facilities have been damaged by the floods. It has warned of water-borne illnesses like cholera and diarrhoea. UNICEF states that these illnesses can cause many deaths of children. The spread of malaria, covid-19, and dengue are also expected to rise further in the crowded camps, which is even further worrying.

These floods have caused immense destruction because the nation collectively was not serious to be ready for such natural disasters,; and the international community, particularly the nations that have great carbon emissions like the USA, China, India, Germany, and Russia did not reduce their carbon emissions, with Pakistan paying the price.

In this regard, the UN secretary-general Antonio Guterres said during his recent visit to Pakistan that the “Wealthier countries are morally responsible for helping developing countries like Pakistan to recover from disasters like these, and to adapt, to build resilience to climate impacts that, unfortunately, will be repeated in the future.”

While the main donors in the Pak-UN joint appeal for initial funding of $160 million are the USA, UK, Canada, Japan, Denmark, Australia, and Singapore, UN Resident and Humanitarian Coordinator Julien Harneis says that this flash appeal is not sufficient.

The authorities should make transparency possible in allocation of funds and facilities to the affected people. Law enforcing agencies like police should strictly monitor prices of the basic commodities in the markets so that in these hard times people should not be compelled to face price gouging. Health facilities should be provided to the people living in the camps. Every possible effort should be made by the citizens as well as the authorities to bring lives back to normal for the affected. Pakistan should suspend debt repayments. Rich nations should help Pakistan in these hard times and re-visit their carbon emission programmes, because, Secretary General Guterres rightly states, “Let’s stop sleepwalking towards the destruction of our planet by climate change. Today, it is Pakistan. Tomorrow, it could be your country.”