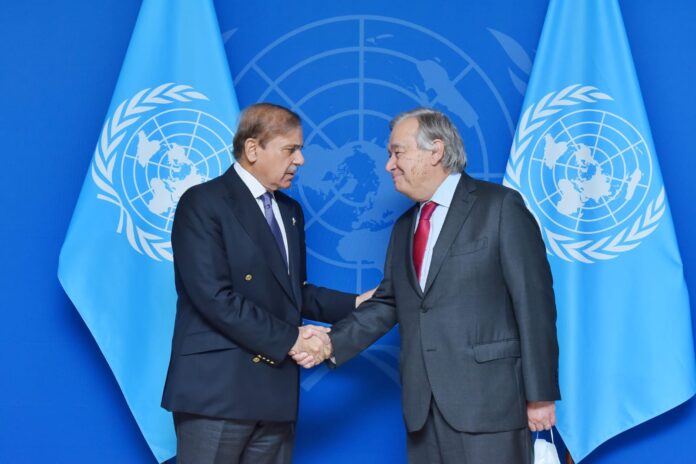 The Prime Minister appreciated the Secretary-General’s timely visit, affirming strong solidarity with Pakistan in the wake of the climate-induced catastrophic floods. He expressed gratitude for the Secretary-General’s strong push to mobilize international support and assistance for the affected people and also emphasized the need for concrete international action to mitigate the impacts of climate change on developing countries.

The Secretary-General committed to do everything possible to mobilize support for Pakistan. He said that Pakistan deserved the full and massive support from the international community.

The Prime Minister added that as the current Chair of the Group of 77 and China, Pakistan would work towards a common position on ways to secure accelerated implementation of the Sustainable Development Goals and environmental agreements and commitments. He expressed gratitude for the support extended by the Secretary-General and the Deputy Secretary-General in this area.

In the regional context, the Prime Minister highlighted the dire human rights situation in IIOJK and expressed the hope that the Secretary-General will use his good offices to facilitate a just and peaceful solution of the Jammu and Kashmir dispute in accordance with the relevant Security Council resolutions.

The Prime Minster reaffirmed the importance attached by Pakistan to a peaceful, stable, and prosperous Afghanistan and stressed the need for the international community to work together to promote shared objectives.

Prime Minister Shehbaz Sharif makes his debut on world stage when addresses the 77session of UN General Assembly on Friday in which he is set to highlight the massive devastation left behind by the deadly climate-induced floods, and appeal for international help to deal with the catastrophe.

The Pakistani leader is the 12th speaker in the 193-member Assembly’s high-level debate on its 4th day in which some 140 world leader are participating, It is the first in-person session of the Assembly following the COVID-19 pandemic.

During his series of meetings with his counterparts from around the world, Prime Minister Sharif has been briefing them on the floods that have inundated one-third of Pakistan, inflicting huge damage to human lives, infrastructure, livestock and crops.

“Pakistan is passing through difficult times and the havoc wreaked by floods, which is obvious before the world, needs serious attention,” he said in his video statement on Wednesday.

Some world leaders have responded by making dramatic appeals to the international community to come forward and help Pakistan.

Opening the debate on Tuesday, UN Secretary-General Antonio Guterres, who made a solidarity visit to Pakistan earlier this month, told world leaders that Pakistan is “drowning not only in floodwater, but in debt.”

On Wednesday, the UN chief went on to say at a private meeting with world leaders on climate change, “We have all seen the appalling images from Pakistan, and this is just at 1.2 degrees of global warming and we are heading for over 3 degrees.”

On his part, Turkish President Recep Tayyip Erdogan, expressing his condolences, said, “we would like to call out to the international community to help the people of Pakistan as they’re going through this most unfortunate and painful time.”

Similarly, many other world leaders have drawn attention to the floods in Pakistan.

Following Guterres’ trip to Pakistan, the UN issued a $160 million flash appeal for help Pakistan cope with initial phases of the calamity, but so far it is not yet fully funded.

In his address, the Prime Minister will also underscore the need for the resolution of the Kashmir dispute, one of the oldest items on the agenda of the Security Council, and reaffirm Pakistan’s principled stand on the issue.

This year’s UNGA is taking place against a backdrop of complex, interconnected crises. Conflict, climate change, and COVID-19 have exacerbated inequality, poverty, and hunger across the planet, particularly among the most vulnerable populations.

ISLAMABAD: Islamabad Capital Territory Police have conducted a mock exercise at D-Chowk to deal with any possible law and order situation as well as...
Read more
NATIONAL

LAHORE: The Lahore High Court ordered the Punjab government on Friday to impose a smog emergency and call for a meeting to take precautions...
Read more
- Advertisment -