The problem is great but not insurmountable 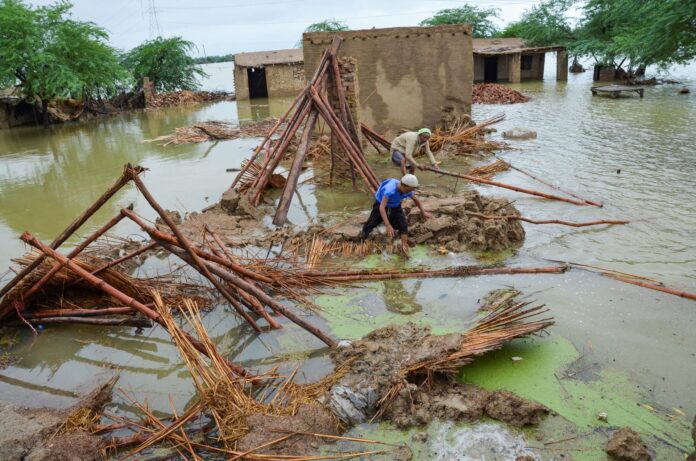 Pakistan contributes less than one percent of the world’s greenhouse gas emissions but faces one of the worst kinds of climate consequences in recent past years. Flood is one of the worst kinds of natural disasters that Pakistan is facing nowadays which has killed more than a thousand men, women, and children, while millions of acres of ready-to-harvest cultivated crops have been completely wasted, millions of livestock have been killed, and thousands of kilometers of roads, connecting bridges, properties, basic infrastructure including hospitals, educational institutions, drainage system, clean water system, power supply, aquatic system on which millions of people’s living is based have been completely or severely damaged.

Other than this, there has been severe flood damage to wildlife, disease proliferation, and destruction of natural habitats. According to estimates by the Ministry of Planning, the recent floods in Pakistan cost at least $10 billion in losses. The recent flood created a huge impact on individuals as well as on communities, and these impacts are economic, social, environmental as well as psychological because people are forced to leave their homes, animals, and memories behind. Nature becomes more furious whenever we try to go against it.

Visits to flood-affectees’ camps in different areas show that while no doubt the Pakistani community, has always set up relief activities including food and possible shelter, overall conditions are very miserable. Depite announcements of billions of rupees of funds from international donor agencies and political parties, displaced people are complaining about the inadequate supply of basic necessities. This natural disaster mishandled by the government has forced people to live in miserable conditions.

No proper shelter nor a single tent was there for more than 400 men, women, and children staying in Jamshoro Sindh. During the day, people use their beds (Charpai) and blankets to form a temporary shelter and at night same bed is being used for sleeping for more than one person.

No washroom or toilet is available for these people: men can manage their needs but for females, it is challenging to live without washrooms. Many pregnant women were there living in miserable conditions; they need medical assistance from time to time and a safe and hygienic place to live and bear their children. Overall women and girls are facing huge difficulties during every disaster. Many social and cultural issues are going to emerge. Living in an unprotected place without proper shelter and security, women and girls can be easily prone to different kinds of violence including rape, abduction, and sexual harassment.

To minimize the devastating flood risk in Pakistan, numerous steps should be taken. These steps can be soil and water conservation, proper use of detention and flood storage areas, formation of new laws regarding the construction of homes and tourist resorts along river banks and seaside, and a high level of uncertainty regarding climate change urge Pakistan to go for small as well as large scale water conservancy projects and long-term flood control adaption plans. This should be done by adaptive management of risks due to climate change and sensible planning by considering all factors including spatial division, risk assessment, and forecasted future trends of floods.

Other than these issues, improper sanitation creates health and hygiene problems. Diarrheal diseases are very common in most of the children living in camps due to drinking unsafe polluted water. Open-air living without any shelter has made families prone to different vector-borne diseases such as malaria, yellow fever, dengue fever, hepatitis A and E, viral gastroenteritis, and respiratory tract infections. Most mortalities occur due to the aftermath of floods.

There is an urgent need of government as well as public intervention in order to collect data effectively, and evaluate possible risks and concrete steps should be taken to resolve these issues. The government and private sectors should focus on providing proper shelter, nutrition, health, and hygiene and improving sanitation in order to reduce morbidity and mortality.

The country has experienced more extreme cold weather in the last few years, and it is expected that the coming winter season will be so hard, and meteorological department predicted more rain this month, so these displaced people need additional humanitarian assistance while winter approaches the country; warm clothes, blankets, medical assistance, winter-proof tents or shelters are required to protect people from extreme cold weather.

One of the main threats waiting for us due to this flood is extreme food insecurity and food crisis. Millions of acres of farmland are underwater, crops like rice, cotton, and daily consumed vegetables have completely vanished, and government and private food storages are washed away. Available food stock is very insufficient for the masses to feed and price hikes left no option for the middle class to live. In short term, Pakistan needs emergency food assistance from international donor agencies including the World Food Programme, and the Food, and Agriculture Organization.

Flood also adds nutrients to the soil including organic materials, nitrogen phosphorus, and natural fertilizer to the soil which increased the production capacity by improving plant growth and recharging the water table. This will be beneficial for farmers because crop production will be increased. For a while, agriculture research departments should help and guide the farmers regarding cultivating short-term and cash crops, because initially, we can import wheat, rice, and pulses from other countries, but it is necessary to grow fast-growing crops and vegetables in flood-affected land to fulfill the country’s basic needs.

These crops could be sunflowers, sugarcane, pearl millet (bajra), or maize, white radish, onion, brinjal, ladyfinger, tomatoes, Spanish, cabbage, and lotus roots (beeh), which can be cultivated during this season after this season’s routine crops can be cultivated.

Pakistan should shift its focus from post-disaster response and compensation to pre-disaster protection, risk prevention, and mitigation by playing an active role in controlling flood risk, flood management, and reducing disaster losses. The rivers prone to floods should be managed carefully, there is an urgent need of building new multiple dams and water reservoirs along the riverside, these water pockets can collect and store additional water and can control the furious flow. We should learn from the world to redevelop water infrastructure including, dams, dikes, levees, tide gates, and physical barriers to prevent running and rising water from causing flooding. Other flood-reducing steps, such as the development of pumping stations and canals, can minimize the flood risk and reduce losses and can also reduce the intensity of floods.

We have numerous examples to learn, in Netherlands, while the River Thames of London is protected by large mechanical barriers built across the river, delta works along with a dam, Canada is protected through floodway defense creating a massive system of dikes, diversions, and floodways along with the Red River, Russia’s Saint Petersburg is protected by numerous dams, Chinese Yangtze River floods are controlled with dikes, polders, and other hard engineering measures in order to save their people from catastrophes.

In order to minimize the devastating flood risk in Pakistan, numerous steps should be taken. These steps can be soil and water conservation, proper use of detention and flood storage areas, formation of new laws regarding the construction of homes and tourist resorts along river banks and seaside, and a high level of uncertainty regarding climate change urge Pakistan to go for small as well as large scale water conservancy projects and long-term flood control adaption plans. This should be done by adaptive management of risks due to climate change and sensible planning by considering all factors including spatial division, risk assessment, and forecasted future trends of floods.

Fayyaz Salih Hussain
The writer is a Ph.D Scholar at the National Centre of Excellence in Analytical Chemistry, University of Sindh, Jamshoro, and can be reached at [email protected]