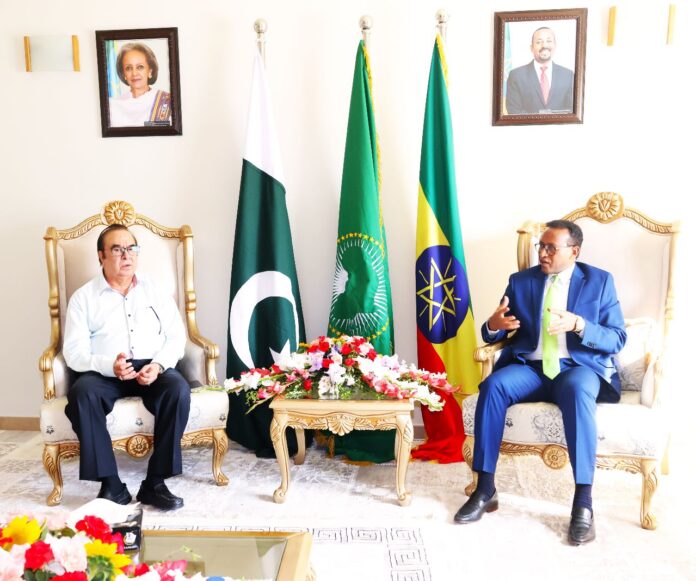 The envoy informed a delegation of the Federation of Pakistan Chambers of Commerce and Industry (FPCCI), which called on him here, that he was in constant contact with the Ethiopian Aviation Authority for starting direct flights from Ethiopia to Pakistan and vice versa.

Modalities were being finalized in that regard as Pakistan’s Minister for Railways and Aviation Khawaja Saad Rafique had agreed to the proposal, he added.

“Ethiopian airlines will be flying soon in Pakistan, which will eventually boost tourism and bilateral trades with marked improvement in people-to-people and business-to-business ties,” Jemal Beker remarked.

He said Ethiopia had been offering online visas to the visitors as its incumbent government believed in opening up the country to boost its economy with reforms for creating a conducive environment for FDI (foreign direct investment).

The ambassador apprised the delegation led by FPCCI Coordinator Capital Office Mirza Abdul Rehman, about the vast tourism and economic potential of his country, including incentives.

“We want to establish institutional linkages here in Pakistan by signing accords with the trade organizations which will eventually increase bilateral trade under a legal system,” he stressed.

The envoy said an expo titled “Explore Ethiopia” was being planned by the Ethiopian government and the Pakistani community would be invited through different chambers of commerce and industries.

Mirza Abdul Rehman confirmed that he would take a delegation of business community to Ethiopia so that the business-to-business contacts between the two countries could be taken to the next level.