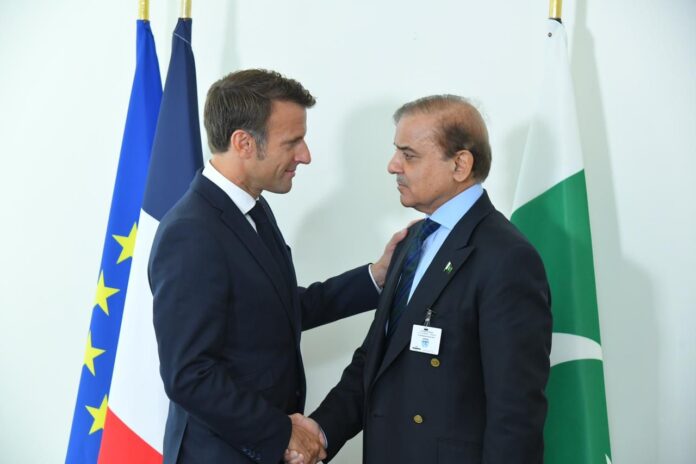 NEW YORK: Prime Minister Shehbaz Sharif on Tuesday met with President of France Emmanuel Macron, on the sidelines of the 77th session of the United Nations General Assembly here.

It was the first meeting between a Pakistani leader with President Macron following the diplomatic ties got affected after caricatures published by a French magazine following which mass protests broke out in Pakistan with demands for sending back the French Ambassador.

The Prime Minister also held a meeting with President of Iran Seyed Ebrahim Raisi. During the meeting, the prime minister recalled his warm and cordial meeting with President Raisi on the sidelines of the SCO Summit in Samarkand on September 15 and underscored his commitment to enhance Pakistan-Iran relations in diverse fields.

He reiterated his gratitude to President Raisi and to the people of Iran for their solidarity and support with the Pakistani nation in the wake of massive floods.

During the meeting, the two leaders agreed to further deepen and broaden bilateral cooperation across a broad range of areas, including economic and trade, energy and connectivity, cultural contacts, and people-to-people links.

The prime minister conveyed that Pakistan highly valued the Supreme Leader’s strong and steadfast support for the just struggle of the people of Indian Illegally Occupied Jammu and Kashmir (IIOJK).

He expressed the hope that, on the invitation extended by him, President Raisi would be able to undertake an early visit to Pakistan.

During the meeting, the two leaders discussed bilateral relations and ways to strengthen mutual cooperation in multiple fields.

The prime minister, who is currently on a US visit to attend the UNGA session, also held meetings with French President Emmanuel Macron and Austrian Chancellor Karl Nehammer earlier.

Prime Minister Shehbaz Sharif on Tuesday expressed gratitude to Palestine’s President Mahmoud Abbas for sending the response and rescue team for the flood-affected people in Pakistan.

The prime minister in a tweet said he was moved by the gesture of the people of Palestine. “Deeply touched by Palestinians’ gesture of sending their Rapid Response and Rescue team to help flood victims in Pakistan,” he said.

PM Sharif termed it as a representation of the brotherhood between the people of Pakistan and Palestine. “It is a reflection of a strong bond of love and brotherhood we have for each other,” he said. “We will never forget this gesture.”

Prime Minister Shehbaz Sharif arrived in New York Monday night to lead Pakistan’s delegation to the 77th session of the United Nations General Assembly, in which some 140 world leaders are expected to take part.

The prime minister is set to address the 193-member Assembly during its high-level debate on September 23. The debate opens Tuesday and ends on Sept. 26

Earlier, the prime minister flew into New York from London where he attended the final rites of Queen Elizabeth II.

On his arrival at New York’s John F Kennedy International Airport , he was received by Pakistan’s Permanent Representative to the UN, Munir Akram, Pakistan’s Ambassador to Washington Masood Khan, Consul General in New York, Ayesha Ali and other senior officials.

On September 20, the prime minister would attend a reception to be hosted by UN Secretary-General Antonio Guterres.

On the same day, he would also meet French President Emmanuel Macron, the Austrian chancellor and the Spanish president.

A meeting with President of the European Union Council Charles Michel and participation in Global Food Security Summit to be hosted by President of Senegal and the African Union is also on the agenda of the prime minister’s visit.

Besides meeting with the UNGA president, Csaba Korosi, the prime minister would also attend a dinner reception to be hosted by US President Joe Biden.

Prime Minister Sharif will also host a luncheon reception in honour of Turkish president and his spouse, besides meeting with Finnish President Sauli Niinisto.