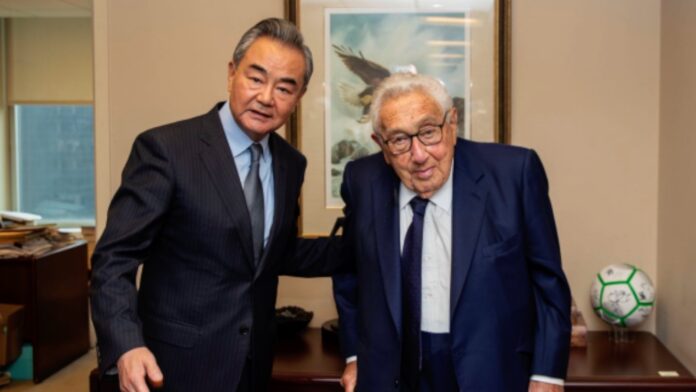 Amid rising tensions between US and China, Chinese State Councilor and Foreign Minister Wang Yi has turned to China’s old friend and former U.S. Secretary of State Henry Kissinger and told him that the pressing priority for China and the United States is to properly handle the Taiwan question, warning that mishandling will have a subversive impact on bilateral ties.

Wang made the remarks during a meeting with former U.S. Secretary of State Henry Kissinger in New York.

U.S. House Speaker Nancy Pelosi’s visit to the Taiwan region, the Senate’s deliberation of the “Taiwan Policy Act of 2022” and claims about “defending” Taiwan from the U.S. side all gravely challenge the three China-U.S. joint communiques and seriously undermine the political foundation of China-U.S. relations, Wang said.

He said the Chinese side’s biggest aspiration is to achieve peaceful reunification of the country and will do its best to make that happen.

Yet, it must be seen that the more rampant “Taiwan independence” is, the less likely the peaceful resolution of the Taiwan question would be, Wang warned.

“As an old Chinese saying goes, it is better to lose a thousand troops than to lose an inch of land,” he said. “This is the will and determination of the Chinese people.”

If the Anti-Secession Law is violated, China will take resolute action in accordance with the law to defend the sovereignty and territorial integrity of the country, Wang added.

Adopted by China in 2005, the Anti-Secession Law stipulates that Taiwan is part of China, and the state shall never allow the “Taiwan independence” secessionist forces to make Taiwan secede from China under any name or by any means.

The Chinese foreign minister made it clear that to maintain the peace and stability of the Taiwan Straits, the U.S. side should utterly return to the original meaning of “one China” and unequivocally oppose “Taiwan independence.” 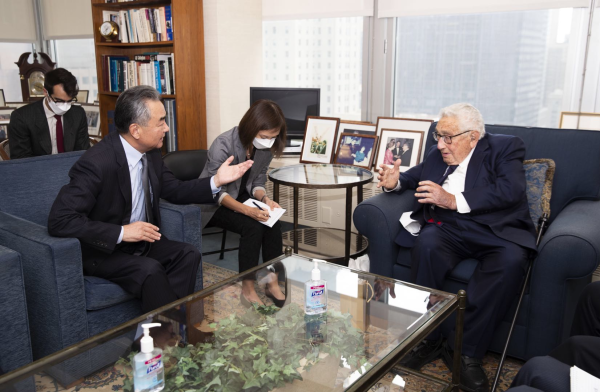 This year marks the 50th anniversary of former U.S. President Richard Nixon’s visit to China and the issue of the Shanghai Communique, Wang said, adding that China and the United States should earnestly sum up the conducive experience of 50 years of exchanges.

The Shanghai Communique was issued on February 28, 1972, when Nixon was about to wrap up his ice-breaking visit to China.

Stressing that China’s policy toward the United States has maintained continuity and stability, Wang noted that Chinese President Xi Jinping has put forward the three principles of mutual respect, peaceful coexistence and win-win cooperation between China and the United States.

They are not only the accumulation of 50 years of experience in bilateral relations, but also the basic principles that should be jointly followed in the next step of development, Wang underlined.

However, what the United States has done is contrary to the commitments, he added.

Out of a wrong perception of China, the United States insists on viewing China as its main rival and a long-term challenge, and some people have even described the success of China-U.S. exchanges as a failure, which respects neither history nor themselves, Wang said.

Kissinger once warned that China-U.S. relations are already in the “foothills of the Cold War,” Wang noted.

The outbreak of a “new Cold War” between China and the United States will be a disaster not only for China and the United States, but also for the whole world, Wang cautioned, adding that the U.S. side should return to a rational and practical China policy, return to the right track of the three China-U.S. joint communiques, and maintain the political foundation of bilateral relations.

During their talks on Monday, Wang congratulated Kissinger on his upcoming 100th birthday, calling him an old and good friend of the Chinese people, who has made historic contributions to the establishment and development of China-U.S. relations.

Wang stressed that the Chinese side appreciates the fact that Kissinger has always been friendly to China and has confidence in China-U.S. relations.

He expressed the hope that Kissinger will continue to play a unique and important role and help bilateral relationship get back on track as soon as possible.

Kissinger, who had personally taken part in the making of the Shanghai Communique between China and the United States 50 years ago, recalled how he and Chinese leaders reached the historic document back then, and said the extreme importance of the Taiwan question for China should be fully recognized.

The U.S. and China should have dialogue, not confrontation, and they should build a bilateral relationship of peaceful coexistence, said Kissinger.