Imported govt working on ‘minus one’ formula: Imran Khan 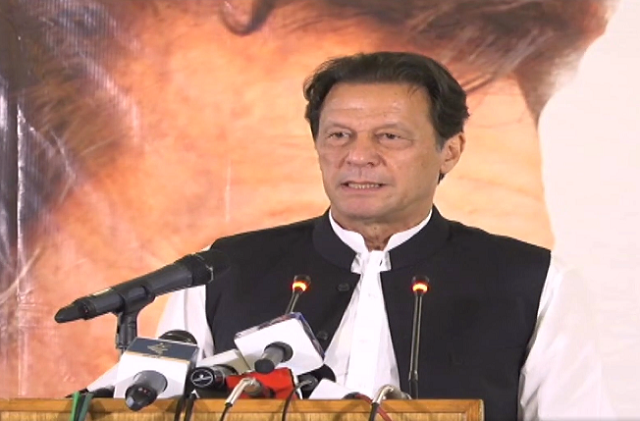 PTI chairman Imran Khan alleged on Friday that the “imported government was working on a minus one formula” as party leaders urged supporters to take to the streets to express solidarity with the former prime minister.

It is pertinent to note that Imran’s statement comes a day after the Islamabad High Court decided to indict him in contempt proceedings over his diatribe at a last month rally in Islamabad against Additional District and Sessions Judge Zeba Chaudhry —who had approved PTI leader Shahbaz Gill’s physical remand in a sedition case.

Earlier, in his rallies, the PTI chief has alleged that attempts were being made to “push him against the wall”. Last week, Imran accused PML-N supremo Nawaz Sharif and former president Asif Ali Zardari of wanting to “appoint an army chief of their choice” in November to save their skin in corruption cases.

It must be noted that his comments drew ire from both the army and the government.

Most recently, he alleged that a conspiracy was being hatched to topple the PTI government in Punjab. Imran said that “Mr X and Mr Y” were threatening his party members to accept bribes.

In a tweet today, the ex-premier said: “Tomorrow our Gujranwala jalsa will be last of our present phase of Haqiqi Azadi Movement. I will announce the next critical phase at the jalsa.”

He added that the imported government and its handlers “are so petrified that the nation is standing firmly behind PTI that they are desperately moving on Minus 1 formula”.

Ahead of Imran’s statement, PTI leader Asad Umar urged the nation to take to the streets on Saturday evening in an expression of solidarity toward the PTI chairman.

Similarly, at a media talk today, former information minister Fawad Chaudhry also appealed to the people to come out against the government’s “minus one formula”.

“It seems like the government doesn’t want to hold elections. Tomorrow, a protest movement will commence across the country […] we urge the entire nation to participate in it,” he said.