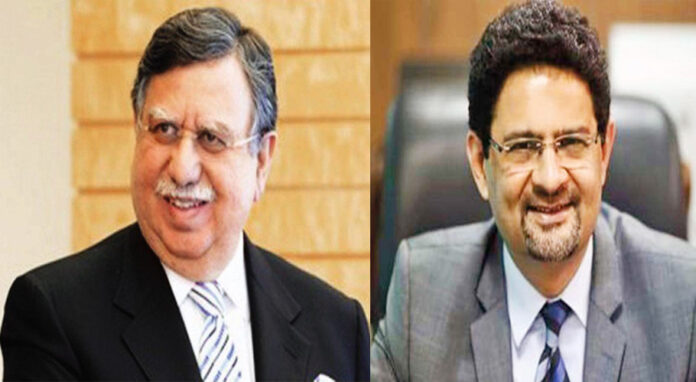 — Miftah Sahib, I was kind to you in my presser but, you stooped to a new low by getting personal and calling names. Shame on you, says Tarin

ISLAMABAD: At a time when country is faced with worst crises of its history, top financial gurus of the ruling Pakistan Muslim League-Nawaz (PML-N) and Pakistan Tehreek-i-Insaf (PTI) on Saturday exchanged barbs and blamed each other for the economic meltdown, reflecting the growing political temperature.

“Miftah Sahib, I was kind to you in my presser but, you stooped to a new low by getting personal and calling names. Shame on you. Our economic performance is well documented in your own economic survey. And your disastrous handling of the economy with the highest ever inflation,” wrote Tarin.

“Discount rate, Lowest Rupee value,R/s 9.7 trn debt in 4 months, crippling power and gas tariffs, food prices before floods, should be a case study in ineptitude. Fiscal deficit was Rs2.5 trn in our 9 mths and Rs2.6trn in your 3 mths,” he added.

“Subsidies were Rs575bn in our 9 mths and additional Rs1575bn in your 3 mths. People of Pakistan will not get impressed with your bluster. I could see frustration on your face. Packup and go home,” said Tarin.

Earlier in the day, Shaukat Tarin urged the government to renegotiate and seek relief from the International Monetary Fund (IMF) in the wake of disastrous floods, as he called it out for “leaking” the audios attributed to him regarding the programme.

Tarin’s presser was met with a scathing response from his successor Miftah Ismail later.

On Monday, two audio clips surfaced via TV channels and social media in which a man said to be Tarin can be heard guiding Khyber Pakhtunkhwa and Punjab’s finance ministers to tell the federal government and the IMF that they would not be able to commit to a provincial budget surplus in light of the recent floods that have wreaked havoc in Pakistan.

Last week, KP Finance Minister Taimur Khan Jhagra had written a letter to the Ministry of Finance conveying his administration’s inability to provide a provincial surplus this year.

The audios triggered criticism against the PTI as the ruling coalition alleged that they were nothing but a conspiracy to derail the state’s deal with the global lender. Later, Law Minister Azam Nazir Tarar said that a forensic audit of the leaks would be conducted.

Tarin claimed that those who leaked the tapes mere hours before the IMF board meeting were the people who “wanted to jeopardize the deal”.

“Who leaked the tapes? We did not. We didn’t make the tapes, so how would we leak them,” he argued.

“So were we jeopardising the programme or were you, by leaking the audios? You could have done it on Tuesday or later on. Why did you do it just before the meeting?”

Tarin claimed that the real problem would have arrived if the IMF would have heard the tapes.

“Although it wouldn’t have affected the programme because the surpluses from provinces are in the form of an MoU (memorandum of understanding),” he asserted.

Elaborating on the matter, Tarin said that the PTI’s aim behind writing the letter was to spend money on the provinces — in the light of the floods. “So that we could go and tell them to give us relief the way they did during Covid-19.

“We believe in the well-being of the country,” the PTI leader said. He recalled that in January when the previous government was going to the global lender for the sixth review, it had faced massive criticism from the opposition.

“Their top leadership had said that the IMF agreement should be torn and called it an attack on the sovereignty. But we never called them traitors, instead, we took it as political discourse.”

Expressing disappointment at the accusations of being a traitor, Tarin said that it was high time all the political parties, including the PTI, moved past it.

“In a democracy, you have the freedom to voice both agreement and dissent.We have a disaster in front of us and it calls for us to unite and fight it together,” he said and advised the government to provide relief to the people in these testing times.

“I am seeing that our common folk will see more burden in the upcoming days because they [the government] will increase taxes and it will have a ripple effect […] and the reason is that they have accepted IMF’s special conditionalities,” he pointed out, citing increasing inflation and appreciating dollar.

The PTI leader emphasised that the country would have to stand up to these conditionalities today — which include an increase in taxes and electricity prices.

“Go to them and ask them for relief. After that go to Russia and buy discounted oil. Give people relief on petrol and gas [prices]. Increase your tax revenue.”

“Don’t waste your time on giving certificates of traitors. We want to work on this together,” Tarin concluded.

Finance Minister Miftah Ismail issued a scathing response to Tarin later in the day while talking to the media in Karachi.

He blasted the PTI government for its performance and lashed out at Tarin over the allegedly leaked audio clips.

Ismail also said that Tarin had assured the IMF of increasing fuel prices in April if the PTI government survived the vote of no-confidence.

“Did Imran Khan not say to the Finance Division that ‘I will raise petrol prices after the first week of April’? If this was not said and I’ve been lied to then I apologise,” Ismail said in a fiery statement.

He called on Tarin to tell if he had allegedly informed the IMF of such an increase or not. “We know your reality and the nation does too now. The reality is that you’ve been selling this mixture of lies,” he added.

“If you want to do politics then go ahead but the nation won’t forgive you because it has seen your reality.”

Regarding economic issues, Ismail said the country was saved from default and the economy had stabilised, although inflation was very high. The finance minister assured that inflation would be absolutely brought under control in the next two months.