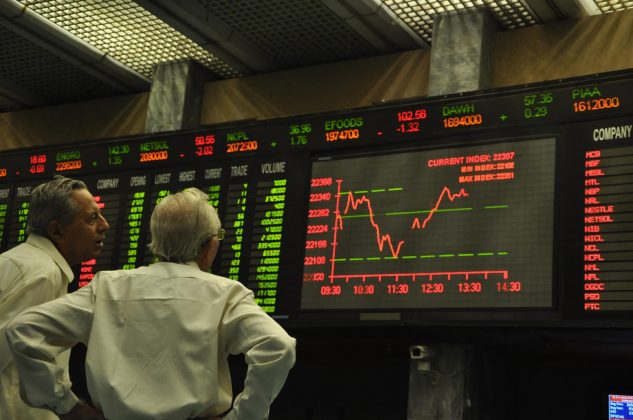 ISLAMABAD: The country’s political uncertainty with ongoing tussles over the recent elections contributed to the rise of an already climbing dollar as well as a blood bath in the stock market.

According to the details, the dollar continued its relentless upward march against the rupee on Monday with the greenback gaining Rs4.25 in interbank trade whereas the benchmark KSE-100 Index appeared bearish from the opening bell and immediately dropped into the red zone after shedding over 700 points during the first few hours of intraday trade, with banking, cement, and fertilizer the top negative contributors on the bourse at the time.

Market experts are of the view that the political uncertainty taking roots once again may potentially impact the International Monetary Fund’s (IMF) bailout program.

Meanwhile, according to the Forex Association of Pakistan, the dollar was trading at a record Rs216 against the local currency at 3:12pm, up Rs5, or 2.4 per cent, from Friday’s close of Rs210.95.

The dollar eventually closed at Rs215.2, with the local currency depreciating 1.97pc, according to data shared by the State Bank of Pakistan (SBP).

The Japanese Yen gained 04 paisa to close at Rs1.55, whereas an increase of Rs7.60 was witnessed in the exchange rate of the British Pound, which was traded at Rs257.24 as compared to its last closing of Rs249.64.

The exchange rates of Emirates Dirham and Saudi Riyal increased by Rs1.12 to close at Rs58.58 and Rs57.30 respectively.

Meanwhile, Pakistan Tehreek-e-Insaf (PTI) Central Secretary General Asad Umar lashed out at the government for its failure to rein in the fast depreciation of rupee against dollar.

In a statement on Monday, Asad said that Pakistan suffered the most due to the poor decisions of the imported government, as Pakistani rupee hit a new low against the US dollar.

He attributed the rupee free fall to the political uncertainty, which he said was bleeding the economy and inflicting tremendous pain on the people. “Time to stop this badly conceived, badly executed and totally gone wrong experiment,” he added.