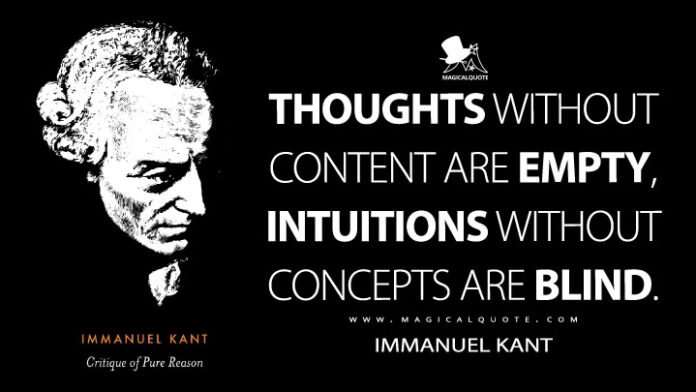 Thoughts without content are empty, intuitions without concepts are blind —Critique of Pure Reason –Emmanuel Kant

There is still a debate going on among philosophers and analysts about what was in Emmanuel Kant’s mind when he wrote, “Thoughts without content are empty, intuitions without concepts are blind.”

For me, Kant’s lines are very important for understanding the construction of narrative and propagation. If I have an intuition that Mr. A is corrupt, I need to develop a negative conceptual schema to transform my intuition into a concept and my thought (Mr. A is corrupt) also needs content to justify otherwise it would remain an empty thought. In today’s world, this content is usually provided in the form of manipulated information to writers, academicians, and journalists when a campaign is launched against an individual, a country, or an institution.

The majority of writers and thinkers believe that Kant wrote the above-mentioned lines as a synopsis of his views about semantic content. Semantic content is a kind of content directly valuable in semantic terms (as having a reference, a sense, some truth values, etc). Moreover, it is content identifiable with a certain proposition. In addition, it is a kind of content capable of having cognitive relevance. It makes a difference in the premises, or consequences, of our theoretical or practical reasoning.  Our concepts and the thoughts they compose would be meaningless without perception, or “intuition,” to verify them and thereby provide them with content; on the other, our perceptions would have no structure and would be of no cognitive use without concepts to direct them.

In Critique of Pure Reason, Kant says that if one leaves out the sensible determination of persistence [the schema for a substance], the substance would signify nothing more than something that can be thought of as a subject (without being a predicate of something else).

William J. Urban explains in his paper “Freedom qua Spontaneity: The Lacanian Subject in the Critique of Pure Reason” that without the schema, what is left over of the content is only “something that can be thought of as a subject (without being a predicate of something else).” This thought is meaningful, but it cannot be justifiably applied in judgment to any known, or knowable, objects, once we subtract the schemata. We need to know what is “schema” to understand this discussion before we move to Perceptional Schema. Schema is a collection of basic knowledge about a concept or entity that serves as a guide to perception, interpretation, imagination, or problem-solving. For example, the schema “dorm room” suggests that a bed and a desk are probably part of the scene but a microwave oven might or might not be because the bed and desk are considered an integral part of a bedroom but not the microwave oven. Frederic C. Bartlett explained that past experiences are stored in memory as schemas; impressions of other people are also thought to be organized in this way.

Today’s communication experts and narrative builders are actually the painters Aristotle mentioned in his work who know what colour to use to make a political party, a country or an institution a “dreadful house” or promote a person as a “corrupt man” or “saviour sent by the divine powers”. We know “Hero constructing” since the Greek era has been using Aristotle’s work. Alexander of Macedonia who was actually an invader is known as a “hero” even in lands he subjugated like the Indo-Pak Subcontinent.

The Perceptual schema is a mental model that provides a frame for interpreting information entering the mind through the senses or for activating an expectation of how a particular perceptual scene may look.

No doubt several meaning-making and narrative-building theories of philosophy of Communication are available that help to understand how to build a narrative or how to dismantle the narrative of others, but I still feel that the human mind is still facilitated by the Communication theory of Aristotle, ” Theory of forms ” of Plato and the dialectical way of Socrates for naming things. The majority of philosophers believe that a dialogue held by Socrates with Hermogenes and written by Plato under the title of Cratylus around 360 B.C ignited the thought that brought Plato’s theory of forms and Aristotle’s model of communication. The dialogue says that to name a thing (tagging etc) is not a sheer act of arbitration (arbitrary) rather that a thing must have certain “qualities” to be named for what it is called. This discussion led to another discussion: why do we call a chair “a chair”? why not a table? Are we born with the thought that a chair (having four legs like any table) is a chair but not a table? Is calling a chair “a chair” an arbitrary act and does calling it again and again with the same name (rhetoric) give it an identity of being a chair and then it becomes conventional to name it “a chair”?

Plato in his theory of Forms says that there is nothing perfect and everything is a shadow or imperfection that we have in our mind as an innate idea. After thousands of years, Kant called this idea an “intuition”. Therefore, we see that today’s all theories of perception and semiotics are related directly or indirectly to Plato’s work.

Aristotle extensively used Plato’s theory in his work which ultimately led to his model of Communication built on Inductive and Deductive logic. Aristotle’s Inductive and Deductive Logic ruled human thought till today with a contribution from American philosopher Charles Sanders Peirce (in 1865) who added the theory of “Abductive reasoning” in logic. Aristotle says that any communication can be broken into three parts:  the sender, the message, and the audience.  He believes that the success of Communication depends on the audience not only getting the message but interpreting the message in the way the sender has intended.

Aristotle says that perception is best understood in the model of hylomorphic change. Hylomorphism is a philosophical theory developed by Aristotle, which conceives “being” (ousia–presence) as a compound of matter and form, and change of presence is material transformation. A raw lump of bronze is shaped into a statue. In this process, matter (raw bronze) loses one form (morphe) and gains a new form of a statue).

According to Aristotle’s theory of perception, we perceive an object by receiving its form (eidos) with our sense organs. The best example given by Aristotle to understand his theory of changing perception is “house change”. He says that a house changes from blue to white when acted upon by a painter applying paint, so “perception comes about with being changed and affected.” Aristotle treats perception as a case of interaction between two suitable agents: objects capable of acting and capacities capable of being affected.

Today’s communication experts and narrative builders are actually the painters Aristotle mentioned in his work who know what colour to use to make a political party, a country or an institution a “dreadful house” or promote a person as a “corrupt man” or “saviour sent by the divine powers”. We know “Hero constructing” since the Greek era has been using Aristotle’s work. Alexander of Macedonia who was actually an invader is known as a “hero” even in lands he subjugated like the Indo-Pak Subcontinent.

By using inductive logic, I can establish a politician “A” is corrupt therefore all politicians are corrupt, by taking one true proposition and then adding a false one but my syllogism will logically be true. There is a saying that truth has nothing to do with a logically true syllogism.

February 5, 2023
ISLAMABAD: The police have arrested four terrorists in the Swabi district of Khyber Pakhtunkhwa, a senior police official said. Police personnel conducted a raid on...