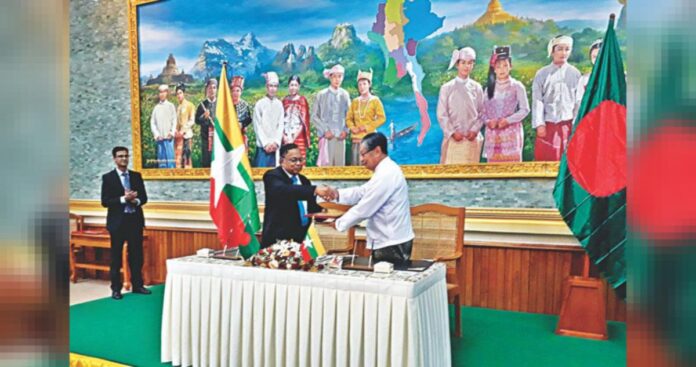 Rohingyas have rallied in their refugee camp to return to Myanmar. Demonstration processions and rallies were held under the banner of the Rohingya community in a joint venture at Rohingya Camp No. 26 and 27 in Teknaf Upazila on June 19.

Rohingyas have rallied demanding immediate repatriation. The rally was held on Sunday morning at the Lombashia camp in Ukhia, ignoring the rain. Rohingyas took part in the rally under the banner ‘Go Home’. On the occasion of World Refugee Day on June 20, several rallies are expected to be held at different places in the Rohingya camp. In these rallies, they will raise some demands including trial of those guilty of genocide and speedy repatriation.

Amidst these, despite having the ongoing crises around the world, there is some positive news for the world: Myanmar has expressed interest in accepting back some Rohingya in Rakhine. According to media reports, the Myanmar-Bangladesh joint working group for repatriation of Muslim refugees held its fifth meeting via video conferencing on June 14. The meeting was reportedly attended by junta regime Foreign Ministry Permanent Secretary U Chan Aye and Bangladeshi Foreign Ministry Secretary Masud Bin Momen. The issue appears to be extremely critical and significant at this time. Myanmar’s military is beginning to recognize Rohingyas as Rakhine people (Myanmar). It is commendable that Myanmar recognizes the long-term realities. Myanmar, on the other hand, should show willingness and commitment to return the Rohingyas. It would be realistic if Myanmar ensured that its goodwill was put into action. Bangladesh has consistently emphasized the importance of facilitating the early repatriation of Myanmar’s Rakhine state’s displaced people.

The two parties talked about the problems of the verification process and how they aim to begin repatriating individuals who have been verified by Myanmar. According to media reports, they also discussed plans for voluntary returnee resettlement and trust-building.

The two parties talked about the problems of the verification process and how they aim to begin repatriating individuals who have been verified by Myanmar. According to state-run media, they also discussed plans for voluntary returnee resettlement and trust-building.

According to the report, the Myanmar side discussed measures to ensure security and rule of law in Rakhine State, including the renovation of transit camps and houses in villages where returnees will be resettled; plans to create jobs and provide education and healthcare to returnees; and cooperation with partner countries, including ASEAN and UN agencies, in the repatriation process.

The two sides discussed the issues with Myanmar’s verification procedure and how they plan to start repatriating people who have been validated by Myanmar. They also reviewed plans for voluntary returnee resettlement and trust-building, according to state-run media.

The Myanmar side discussed measures to ensure security and the rule of law in Rakhine State, including the renovation of transit camps and houses in villages where returnees will be resettled; plans to create jobs and provide education and healthcare to returnees; and cooperation with partner countries, including ASEAN and UN agencies in the repatriation process, according to the report.

Muslim refugees in Bangladesh are unlikely to return to Myanmar for the time being, according to Arakan State analysts, due to the increasingly tense dynamics that have surrounded last year’s coup, and the delicate situation in Arakan State in particular.

Myanmar’s proposed Rohingya repatriation, all assurance to Bangladesh procedure at the fifth meeting via video conferencing, on the other hand, must be smoothly implemented, ongoing, and long-term. There mustn’t be just paperwork, virtual meetings, verbal promises. There must be a safe, dignified repatriation which needs to be smoothly and promptly implemented

However, it is encouraging to see signs of movement in negotiations for the repatriation of Myanmar’s Rohingya ethnic minority from Bangladesh, who were forcibly expelled from Myanmar in 2017. Myanmar understood that any delay regarding the repatriation can destabilize the region. It is true that Long-term uncertainty about repatriation may encourage Rohingya refugees to engage in criminal activity. Many Rohingya are becoming disgruntled as a result of the prolonged ambiguity surrounding their repatriation.

When the Rohingya discover that there is no sign of the repatriation, they may engage more in human trafficking, prostitution, and illegal drug dealing. As a result, the entire region might be thrown off balance.

Bangladesh had previously signed bilateral agreements with Myanmar on 30 October 2017 and 30 October 2018. However, the world did not witness the accords being implemented, espite the fact that Bangladesh is home to over a million Rohingya refugees. A total of 0.7 million new people has arrived, with 0.4 million already present. Bangladesh has demonstrated its humanity by sheltering such a large number of Rohingya Muslims. Myanmar, on the other hand, has long been a contentious issue both at home and abroad.

Bangladesh wants Myanmar to speed up the verification of Rohingya so that they can begin their repatriation, which has been delayed for the past five years due to unfavourable conditions in Rakhine, according to the Rohingya.

Bangladesh also highlighted the importance of maintaining the security, livelihood, and well-being of the returnees at the fifth meeting of the Joint Working Group (JWG) on the repatriation of Rohingya, which was conducted electronically.

Following deadly military campaigns in 2017, around 750,000 Rohingya fled to Bangladesh. The Rohingya were unable to be repatriated despite numerous attempts, claiming that the conditions in Rakhine State were unsuitable and that they would lose their citizenship if they returned.

During the epidemic, no bilateral contacts occurred for more than two years. In January, Bangladesh and Myanmar had a virtual conference of the technical level “Ad-Hoc Task Force for Verification of Rakhine Displaced Persons.”

Bangladesh intends to repatriate 750000 Rohingya Muslims over the course of many years. And this repatriation is meant to be voluntary and conducted in a secure setting. This approach will also involve the United Nations. Elections, military coups, and the covid-19 outbreak in Myanmar have all slowed down the process of Rohingya repatriation. Discussions continued on January 26 at a virtual meeting of the two countries’ technical committees.

Despite international criticism, Myanmar’s government reached an agreement with Bangladesh to return the Rohingya, but the process has yet to begin. Myanmar, on the other hand, has consistently used a variety of techniques to hinder the repatriation process. On the Rohingya situation, the international world has also been silent. They ended their ‘responsibility’ with boastful statements; on the contrary. PM Sheikh Hasina Wajid, has always acted humanely in the Rohingya crisis. In the end, Myanmar’s existing interests should not be manipulated. Bangladesh, as always, must be watchful in this situation.

If we desire a successful and long-lasting repatriation of Rohingyas in Rakhine, the international community must now push Myanmar to follow certain international customary law on Rohingya repatriation. The Myanmar government must meet the following criteria:

1) At first, the Myanmar authorities must keep their word and implement the accord without any delay. Without its implementation, there is no outcome of that meeting. Myanmar must ensure that the repatriation of Rohingya Muslims is safe, continuous, dignified, and long-term.

2) They should change the citizenship law of 1982. In Myanmar, they must recognize Rohingya as a legal ethnic group.

3) The Rohingya must have a safe haven in their birthplace, Rakhine.

4) They must comply with the Kofi Annan Commission’s (Advisory Commission on Rakhine State) recommendations and the Bangladesh Prime Minister’s suggestions at the 74th, 75th, and 76th United Nations General Assembly.

5) Analysts warn Bangladesh to be cautious if Myanmar decides to repatriate 700 individuals. They must stay true to its word. Myanmar must affirm that it would return all Rohingya refugees stuck in Bangladesh.

6) It must be committed to making the process a continuous one. The Rohingya people would be repatriated in a continual stage.

7) Bangladesh needs to strengthen its diplomatic ties. In light of the projected Rohingya repatriation, Bangladesh must take a comprehensive stance on the Rohingya issue in many forums. Third parties, such as the United Nations High Commissioner for Refugees, the Association of Southeast Asian Nations, and even third countries, can be involved in the process.

Myanmar’s proposed Rohingya repatriation, all assurance to Bangladesh procedure at the fifth meeting via video conferencing, on the other hand, must be smoothly implemented, ongoing, and long-term. There mustn’t be just paperwork, virtual meetings, verbal promises. There must be a safe, dignified repatriation which needs to be smoothly and promptly implemented.

Parvej Siddique Bhuiyan
The writer can be reached at [email protected]