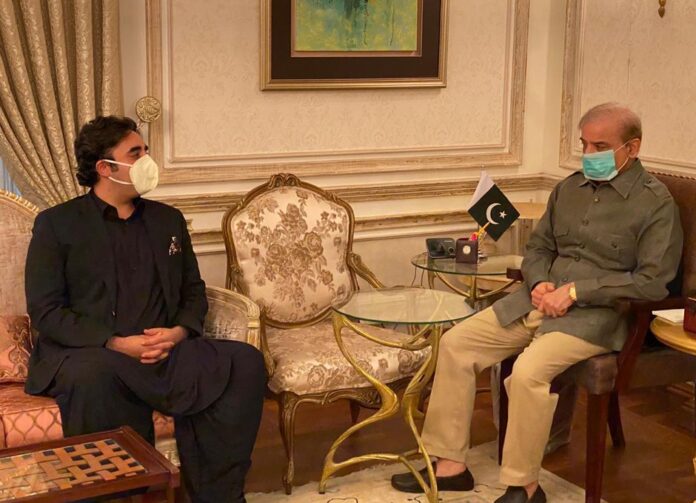 According to highly informed sources, Bilawal also discussed the funds received from China and the matters pertaining to talks with the International Monetary Fund (IMF), in his one-on-one meeting with PM Shehbaz Sharif.

Per sources, Bilawal had directly arrived at the PM House after landing at Islamabad International Airport. Chief Minister of Sindh Syed Murad Ali Shah is also expected in Islamabad this evening.

The sources say that the allies of the PML-N and PPP are fast getting annoyed with the attitude of the PML-N ministers and they have publicly threatened to shift to the opposition benches which may bring downfall of the Shehbaz-led coalition government.

Zardari will hold meeting with Shehbaz Sharif for resolution of the issues especially the concerns raised by the coalition partners of the federal government.

According to sources, BAP parliamentary leader Khalid Magsi had complained Zardari with regard to development schemes. Separately, Aslam Bhotani has also complained senior Zardari against the attitude of the PML-N ministers towards the allied parties.

According to sources, BAP leader Khalid Magsi in a meeting with the prime minister Shehbaz Sharif had urged him to keep the allies into loop during consultations.

“We are unconditionally supporting you but don’t neglect us,” Magsi said in straight talk during meeting of a delegation of the Balochistan Awami Party (BAP) and independent members with the prime minister.

Another key ally, Muttahida Qaumi Movement-Pakistan (MQM-P) has threatened to sit on the opposition benches.

The MQM-P raised reservations about the attitude of the coalition ministers of the government in the National Assembly and threatened to sit on the opposition benches.

MNA Sheikh Salahuddin while addressing the National Assembly said that MQM-P has paid a heavy political price for this government, if they are to be given such answers in the assembly by ministers then we will not hesitate to sit on this side.

Another lawmaker, Sabir QaimKhani staged a walkout from the assembly over no resolution to the problems of Hyderabad. Qaimkhani said that if the problems are not solved, then there is no need to remain in ministries, it’s useless.

The MQM-P lawmaker said that no priority was given to the projects of their areas in the budget, without taking anyone’s name, he said one person is not allowing our projects to be included in the budget.

Federal Minister Murtaza Javed Abbasi held talks with MQM members after they staged a walk-out from the National Assembly (NA).