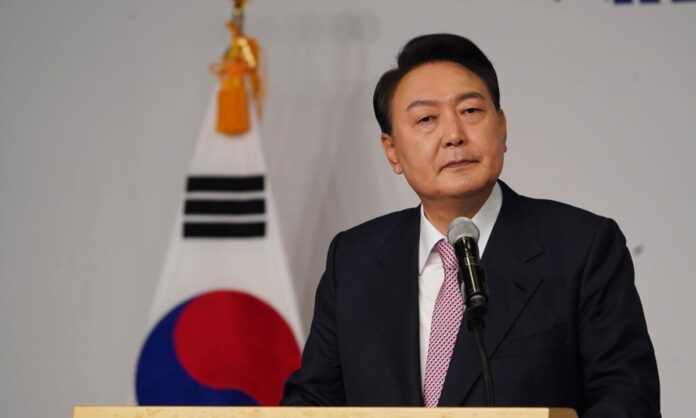 South Korean President Yoon Suk-yeol is expected to meet with US President Joe Biden and Japanese Prime Minister Fumio Kishida at the NATO leaders’ summit from Wednesday to Thursday in Madrid, which would become Yoon’s in-person debut on a multilateral stage.

One day before Yoon’s departure Monday, North Korea accused the US, South Korea and Japan of building a NATO-like military alliance in Asia, Reuters reported, citing a statement from North Korea’s foreign ministry.

Chinese experts said the US aim to further promote NATO’s Asia-Pacific expansion through talks with Asian allies will create tensions on the Korean Peninsula, while Seoul’s relations with Beijing will be more complicated if the Yoon administration gradually loses its diplomatic independence by relying on the US.

An official at Seoul’s presidential office confirmed on Sunday Yoon’s meeting with the Japanese and American leaders, marking the first three-way summit since 2017, on the sidelines of the 72nd session of the UN General Assembly,  Reuters reported. South Korea’s Yonhap News Agency said the lull was due to “badly frayed relations between Seoul and Tokyo.”

Some media claimed that the US wants to take the rare occasion with Tokyo and Seoul on the same table to improve ties between its two allies which have territorial disputes and wartime labor issues between them. However, Yonhap reported Saturday that Tokyo said it is unlikely to see the one-on-one leader summit or a pull aside meeting between Japan and South Korea leaders during the NATO summit.

Media reported that Yoon aims to seek more international support for his administration’s approach in dealing with the North Korea nuclear issue, which would also likely be one of the topics in a separate trilateral summit.

Although the South Korean presidential office has previously explained that Yoon’s Madrid trip should not be interpreted as a shift to an anti-Russia or anti-China policy, some analysts said the Seoul’s new government is losing its strategic independence in boosting its alliance with the US, from exchanges at the US-led QUAD security dialogue, to participation in the Indo-Pacific Economic Framework and the upcoming NATO summit. And it’s unrealistic to expect a zero response from Beijing.

The summit between US, Japan and South Korea leaders is a step to promote the Asia-Pacific expansion of NATO, a Beijing-based expert told the Global Times on condition of anonymity. He explained that US alliances in the Asia-Pacific are mainly bilateral, and it wants to integrate them and promote smaller multilateral mechanisms, so it starts with Japan and South Korea.

The new South Korea government is trying to demonstrate its loyalty and support to Washington at a time when the Biden administration needs to show off unity within its clique, the expert said.

Lü Chao, an expert on the Korean Peninsula issue at the Liaoning Academy of Social Sciences, told the Global Times on Monday that although Seoul is restrained compared with Tokyo, which actively participates in anti-China activities, cooperating with Japan and the US in NATO’s Asia expansion will have a negative impact on   peace and stability, especially northeast Asia and the Korean Peninsula, and even cause divisions and confrontations in the Asia-Pacific region.

North Korea’s Foreign Ministry on Sunday accused the US of “making a full-fledged move to establish an Asia-style NATO” by holding joint military exercises with Japan and South Korea, Reuters reported, citing the statement from North Korea’s foreign ministry.

The US wishes to have Japan and South Korea in the front for deeper interference in other issues in Asia with NATO at its back, said Lü.

“After taking office, Yoon adopted a policy of almost unconditional deference to the US. The new South Korean government wants to enhance its status by interacting with Washington on the international stage. But it will damage South Korea’s long-term national interests,” the Beijing-based expert said.

“If the US asks South Korea to deploy more THAAD on its territory, South Korea will face strong backlash from China, Russia and North Korea, but it’s also difficult for South Korea to turn it down. If the Americans demand that South Korea sacrifice its disputed territory to Japan in exchange for better cooperation within the clique, the South Koreans would also be in a dilemma,” the expert noted.

The US way to maintain its hegemony at a time of serious domestic problems is by bringing in allies to share the risks and costs. But if they cooperate with the US and NATO interference in the Asia-Pacific that harms China’s interests, China will respond firmly, Lü said.

China hopes South Korea can carefully assess the situation and give priority to the cooperative relations with China and other countries, experts said, noting that US policymakers may be thinking of creating a bigger crisis in the international community than the Russia-Ukraine conflict to ease its inflation, gun violence, racial issues and low approval ratings at home.