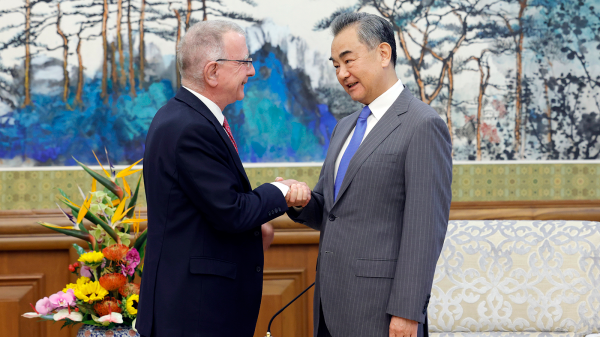 As two important forces in the world, China and the European Union (EU) should strengthen dialogue and communication and unswervingly uphold their partnership, said Chinese State Councilor and Foreign Minister Wang Yi on Tuesday.

He made the remarks when meeting with outgoing Head of the Delegation of the EU to China Nicolas Chapuis.

In recent years, China and the EU have reached an Agreement on Geographical Indications, established high-level dialogue mechanisms on digital and green issues, and completed the negotiations on the China-EU investment agreement, yielding important cooperation outcomes, Wang said.

The two sides should uphold the principle of seeking common ground while shelving differences, uphold mutually beneficial cooperation, uphold the trend of multilateralism and provide more stability and positive energy to the world, he added.

Some differences between China and the EU have affected the sound development of China-EU relations from time to time, he said, calling on the EU to form a more objective and correct understanding of China’s development. China and Europe are partners rather than competitors, let alone systemic rivals, he noted.

China will continue to follow the path of peaceful development and build a new system of an open economy with higher standards, he said.

Noting EU-China relations have great potential for development, Chapuis said despite differences, the two sides have every reason to seek common interests and achieve win-win outcomes.

The EU, like China, does not want to see the world fall into bloc confrontation, he said. Europe stands ready to work with China to address global challenges such as climate change, the pandemic and digital transformation, he said.

The EU adheres to the one-China principle, and will not break this commitment, he added.

Chapuis also touched on the Ukrainian issue, saying that the EU expects an early ceasefire and end of the conflict, and hopes that China will play an active role in this regard.