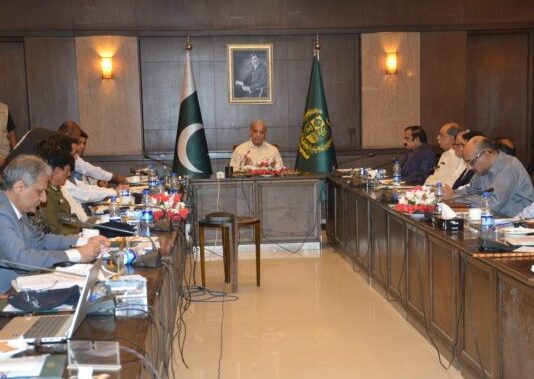 LAHORE: Prime Minister Shehbaz Sharif on Sunday said the role of provincial governments in implementation of the National Action Plan (NAP) would be revived which had subsided over last four years and the ignorance of the provinces’ role in the NAP had led to the rise in terrorism.

He also expressed concern over the rise in street crimes in the country and instructed the law enforcement agencies to take measures for protection of lives and properties of the people.

The prime minister said that the public opinion could only be turned in favour of the police and law enforcing agencies only when they show performance.

During the meeting, the premier was briefed on the law and order situation across the country as well as Punjab province, terror threats as well as the measures being taken to curb the scourge.

The meeting also reviewed implementation of the steps to eliminate the sources of terror financing and relevant laws.

The prime minister appreciated the performance of the law enforcement agencies regarding the fulfilment of the Financial Action Task Force (FATF)’s action plan.

He said the whole nation was united against terrorism and stood side by side with the country’s armed forces. “Our struggle will go on till the elimination of terrorism. The government will never compromise Pakistan’s security and defence,” he remarked.

“We will continue our struggle till the complete eradication of terrorism,” the PM said.

“We will not compromise on Pakistan’s security and defence.” While directing the law enforcement agencies to ensure protection of lives and property of the people across the country, he said ensuring law and order was a key requirement for the recovery and development of Pakistan’s economy.

A recent report by a local think-tank, PICSS, had noted that the lethality of terror attacks rose by 46 per cent in 2021, with 388 total deaths of which 184 were civilians, stating the remaining 192 of those killed were security forces personnel – a 66 per cent increase in the casualties of Pakistani security forces from the year before.

It said that over 600 people were injured in the terror attacks of 2021, including 389 civilians and 217 security forces personnel. The report showed that the average number of militant attacks per month in Pakistan increased from 16 attacks per month in 2020 to 25 monthly attacks in 2021 — the highest on record since 2017.

Prime Minister Shehbaz Sharif has taken strict notice of absence of most of the lawmakers in the National Assembly’s budget session, it was learnt on Sunday.

Stressing complete quorum during passage of the federal budget 2022-2023, the prime minister has called a meeting of the treasury MNAs, belonging both to the government and the allied parties, on Monday (today) which is aimed at ensuring their presence during the National Assembly’s budget session.

Shehbaz Sharif will also host a dinner reception for the lawmakers at the PM House on Monday night. PM Shehbaz will also brief the participants on talks with the IMF. Sources said that PM would seek suggestions from the lawmakers to tackle inflation and other economic challenges.