The USA: Champion of democracy or imperialist bully?

The USA doesn’t learn from history 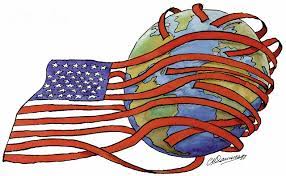 No need to delve deeper. Just take a closer look into the historical background of the dubious foundations of the nation under discussion. Columbus, the highly celebrated and yet controversial figure, while making his sea journey towards Asia in search of gold and spices for the Spanish monarchy accidentally, and to say, out of sheer luck came across an unknown land that lay between Europe and Asia: the Americas.

Columbus writes in his findings:

‘’As soon as I arrived in the Indies, on the first Island which I found, I took some of the natives by force in order that they might learn and might give me information of whatever there is in these parts’’.

Columbus and his crew were met by Arawak Indians who greeted them graciously, offered them food, water and gifts. Noticing that they were wearing gold ornaments in their ears, it led Columbus to take some of them aboard ship as prisoners so that they would guide him to the source of gold. He then sailed to what is now Cuba, then to Hispaniola (the island which today consists of Haiti and the Dominican Republic). There, bits of visible gold in the rivers, and a gold mask presented to Columbus by a local Indian chief, led to wild visions of gold fields.

The discovery of gold, silver and abundance of land for cultivation, and the outright ignorance and lack of armaments on the part of the Native Americans led to the exploitation of the Americas by the European settlers. Most Native American societies perished and the few that survived did so barely on often marginal lands.

Indigenous people both north and south were displaced, died of disease, and were killed by Europeans through slavery, rape, and war. In 1491, about 145 million people lived in the western hemisphere. By 1691, the population of indigenous Americans had declined by 90–95 percent, or by around 130 million people. [American Philosophy: From Wounded Knee to the Present (2015)]

The America that we see today following into the footsteps of its ruthless forefathers has no qualms about spilling the blood of the innocent as long as the bloodshed aligns with the goal of maintaining its implied hegemonic rule in the global community, as can be assessed from the following examples of the USA wreaking havoc in countries that committed the abominable sin of refusing to bow down to the wishes of the New World.

In the aftermath of the 9/11 attacks in New York and Washington in 2001, the USA declared the infamous War on Terror against extremism, ‘radical Islam’ to be more accurate. Rather than bringing the proponents of al-Qaeda (a terrorist organization that took responsibility for the 9/11 attacks) to justice, the USA ruthlessly killed innocent civilians that in turn gave impetus to anti-US sentiment across the entire Muslim globe. The Afghan youth trained by the CIA, that had fought against the USSR during the 1980s, now started fighting against the US invasion and gained sympathies of Muslims from around the world who considered them as mujahidin fighting against the foreign invasion in their homeland.

The USA likewise put pressure on Pakistan to support its endeavours in relation to the War on Terror. The US government gave directions to General Musharraf, the then President of Pakistan, and his government, that included clamping down on Al-Qaeda operations on the Pakistani border, handing over intelligence information, granting the USA access to Pakistan’s naval and air bases, breaking off diplomatic relations with the Taliban regime in Afghanistan and cutting off their fuel supply. Musharraf in an interview with CBS News’ magazine show “60 Minutes,” mentioned that the US Deputy Secretary of State, Richard Armitage, told his intelligence director that Pakistan had to help the USA or Pakistan would be ‘’bombed back to the stone age’’.

While the ‘War on Terror’ fostered the myth of equating Islam with radicalism and violence, a Gallup survey published in 2008 revealed that the vast majority of Muslims worldwide condemned the 9/11 attacks. Like non-Muslims, their priorities and dreams involved better jobs and security, not holy war or bloodshed.

There is a dire need for the USA to recognize the fact that in order to stay relevant in the arena of global power dynamics, it needs to commit to the vision of respecting the sovereignty and territorial integrity of all countries, uphold non-interference in internal affairs, and respect the independent choices of development paths and social systems made by people in different countries.

The Pakistani government launched military operations in the tribal areas of Pakistan killing thousands of innocent civilians who had nothing to do with the 9/11 attacks. It resulted in disastrous consequences for Pakistan as the disgruntled youth in tribal areas turned against the military and Pakistani interests, and launched a stream of terrorist attacks against Pakistan. Pakistan is still facing the uncalled-for consequences of supporting the War on Terror which has gravely upset its national security interests. As of April 2021, more than 71,000 Afghan and Pakistani civilians are estimated to have died as a direct result of the war.

The US-led coalition invaded Iraq in March 2003 and tried to justify gross human rights violations based on the specious claim that Iraq, under dictator Saddam Hussein, possessed or was in the process of building weapons of mass destruction. The 9/11 attacks provided the US administration with the perfect excuse to overthrow Saddam Hussein since it was pushing for regime change in Iraq since 1997. Saddam Hussein was captured during Operation Red Dawn in December 2003 and executed three years later in 2006. The power vacuum following Saddam’s demise and mismanagement by the caretaker government established by the US-led Multinational Force or coalition, led to widespread civil war between Shias and Sunnis, as well as a lengthy insurgency against coalition forces.

In 2008, President Bush agreed to a withdrawal of all US combat troops from Iraq. The withdrawal was completed under President Barack Obama in December 2011. No weapons of mass destruction were found in Iraq. Numerous claims made by the officials of the Bush Administration about a purported Saddam–Al-Qaeda relationship and WMDs based on sketchy evidence were rejected by intelligence officials. The rationale for war faced heavy criticism both domestically and internationally. In total, the war caused at least 100,000 civilian deaths, as well as tens of thousands of military deaths. The majority of deaths occurred as a result of the insurgency and civil conflicts between 2004 and 2007. The Iraqi civil war (2013-17), which is considered an after effect of the invasion and occupation, caused at least 155,000 deaths, in addition to the displacement of more than 3.3 million people within the country. The country suffered gravely in terms of socio-economic and financial disability as a result of which the country fell a prey to a heightened level of sectarianism and terrorism. But the USA has blatantly refused to take responsibility for its gruesome actions.

The problem with the USA is that it never learns from history. It takes immediate actions and bases its foreign policy on creating fear in the developing countries without fully assessing the consequences of its actions and their overall effect on the international community. By waging war against Afghanistan without taking into account, the Pashtun mentality and importance of jihad against foreign occupation, it literally opened a Pandora’s box resulting in an increase in Anti-USA sentiment around the Muslim world, and a marked increase in terrorist attacks in the USA itself as well as in the West.

To many Muslims, US interference in internal politics, its wanton disregard for other countries’ sovereignty, its backing of corrupt dictators and invasions of Iraq and Afghanistan are just modern examples of colonial injustices in a long list that started with Napoleon’s invasion of Egypt in 1798 (Imran Khan in his book Pakistan: A Personal History)

It took the USA nearly 20 years to realize the fact that there was never going to be a military solution in Afghanistan. The US Armed Forces completed their withdrawal from Afghanistan on 30 August 2021, marking the end of the 2001–2021 war following the US-Taliban deal signed between the Trump Administration and the Taliban in Doha, Qatar, in February 2020. With the US exit from Afghanistan, the Taliban took over the reins of the country, and the USA, embarrassed by its defeat, imposed sanctions against the Afghan nation. Its attempt to destabilize the country economically and financially resulted in the worst humanitarian crises seen in the modern age.

The question of the hour is that for how long the leaders of our nation, in their lust for relishing power and glory that is all but fleeting, are going to let the New World get away with the gross human rights violations committed by it?

There is a dire need for the USA to recognize the fact that in order to stay relevant in the arena of global power dynamics, it needs to commit to the vision of respecting the sovereignty and territorial integrity of all countries, uphold non-interference in internal affairs, and respect the independent choices of development paths and social systems made by people in different countries.

Sunbal Nawaz Lashari
The writer is a freelance columnist