Imran warns of further chaos, inflation if transparent polls are not held forthwith 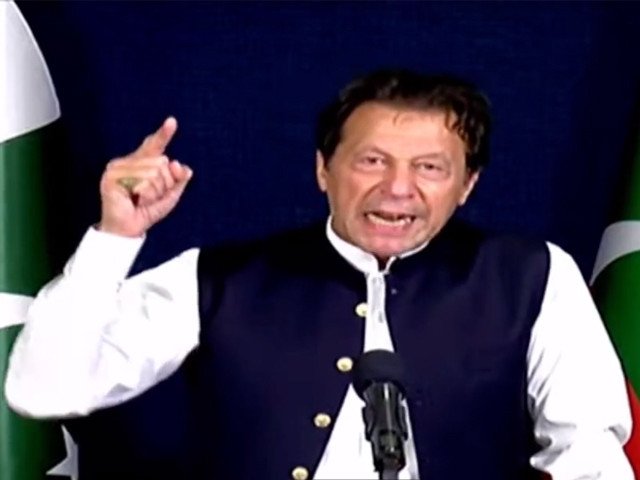 ISLAMABAD: Former prime minister and PTI Chairman Imran Khan on Sunday warned against further inflation and chaos if early and transparent elections are not held forthwith.

Imran Khan expressed these views while addressing the party protesters who staged demonstrations in various cities of the country against rising inflation. Imran addressed the protesters via video link at 10pm and the PTI has also installed screens at major protest venues across the country to show his address, in which he is expected to make major announcements regarding the party’s future course of action against the government.

The PTI has also installed screens at major protest venues across the country to show his address, in which he is expected to make major announcements regarding the party’s future course of action against the incumbent government.

PTI Chairman Imran Khan also urged the people earlier this week to take to the streets on Sunday (today) to stage a “peaceful demonstration” against rising inflation, particularly the massive increase in the prices of petroleum products.

“I told you to come out today for your betterment. Because I fear that the petrol prices that have risen today will not stop here,” the former prime minister told his supporters.

The PTI chairman said that he expects to see inflation to rise further, warning that the people who will be affected by it will be the lower class, salaried class and especially the farmers.

“Today every Pakistani wants to ask what has happened in the country after no-confidence motion,” said Imran Khan. He added that the coalition government claims that he had left behind “landmines”.

The former prime minister said that the incumbent government says that as the PTI had made agreements with IMF they had no option but to raise prices. He reminded the people that during the PTI’s tenure the ruling parties had launched marches when they had increased prices by Rs12.

“Since they have come they have increased petrol prices by Rs84 and diesel by Rs110. And diesel prices will affect farmers most and our food security in return. This will impact every class and there will be more,” said Imran Khan. He added that people will know about the “inflationary bomb” when they see June’s electricity bills.

“They are in IMF Programme since two months and we were in it since 2.5 months. Did we not have pressure to raise prices? Did we not negotiate with IMF constantly?” asked the PTI chairman.

The PTI chairman said that when the IMF asked his government to raise prices they decreased it as they knew the impact it would have on the people.

“We did it by taking money from here and there. We were in IMF programmes as well but cared about our people,” said Imran.

The PTI chairman said that the coalition government claims that they got a bad Pakistan but in reality it was not true. Instead, he claimed, that it was the PML-N government from 2013-2018 that left a “real landmine” in the form of a ballooning current account deficit.

Imran was ousted from power in April through a vote of no-confidence and since then he has been going places, building pressure on the coalition government to announce a date for the next elections as he called the current set-up “imposed from outside”.

Imran also accused the current government of being “incapable of handling the economy” and warned that prices would soar even higher in the days to come if the nation “kept sitting idly”.

After ending his much-hyped long march abruptly last month, Imran has been asking his supporters to prepare for the next long march towards Islamabad saying he will come with better planning this time around.

PTI workers held protest demos against rising inflation in different cities across the country on the call of their party chairman.

PTI Chairman Imran Khan addressed the crowds in the different cities via video link at 10pm and announce his party’s future course of action.