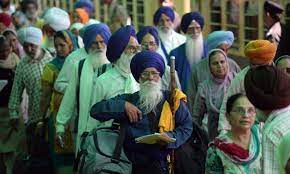 144 Sikh yatrees, including Sikhs from Canada, United Kingdom (UK) and the United States (US) had travelled from India to attend Jorr Mela. A 16-member Raagi group led by Sardar Sukhwinder

Singh, 144 Indian Sikh yatrees and a large number of pilgrims from Pakistan attended
the ceremony.

Bhog of Akhad Path was offered on this occasion after recitation from the Gurur Grantham Sahib to mark death anniversary of the fifth master Guru Arjun Dev. Hymns were also sung by the Raagi Group.

Speaking on the occasion, Maulana Syed Abdul Khabeer Azad said Islam puts special emphasis on the rights of minorities, adding that: “All minorities enjoy complete religious freedom and opportunities to self-aggrendizement in Pakistan”.

He said his father started the mission of promoting inter-faith harmony from the platform of the Badshahi Mosque. He said: “It is our collective responsibility to promote inter-faith harmony and human dignity in the face of various challenges faced by the world”.

Maulana Syed Abdul Khabeere said Pakistan is a bouquet made up of different flowers, adding that the white coloUr in the Pakistan flag represents minorities.

The ETPB Chairman Habib ur Rehman Gillani said Pakistani minorities enjoyed all rights in the light of the constitution of Pakistan.

He welcomed the followers of Sikh and Hindu religions across the world to Pakistan, adding that:” Our doors are always open for the pilgrims”.

The chairman ETPB wished that more and more Sikh yatrees arrive from the neighbouring India and perform their religious rites at the shrines and gurdwaras.

Sardar Sukhwindar Singh said:” Pakistan is our second home and love and affection, we have been accorded, cannot be expressed in words”.

He said, no doubt, the religious sites of Sikh religions were very well looked after in Pakistan and the Sikh nation across the globe was obliged to Pakistan for the favours.