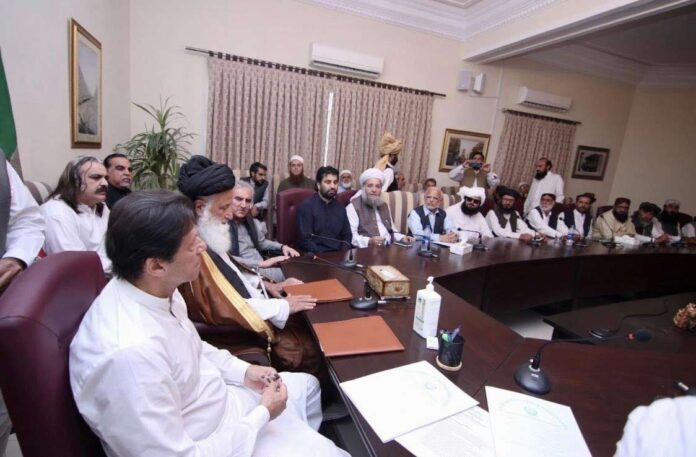 According to sources, Head of JUI Sherani Group, Maulana Mohammad Khan Sherani along with a 25-member delegation met PTI Chairman Imran Khan and announced to form an alliance with the PTI.

Maulana Sherani said that the struggle against Islamophobia is one of the commonalities.

Imran Khan welcomed the Head of JUI Sherani Group Maulana Khan Sherani along with a 25-member and said that PTI strives to achieve higher political and social goals beyond traditional politics.

JUI leader and the CII’s ex-chairperson Maulana Muhammad Khan Sherani is regarded one of grand religious leaders of the followers of Deoband school of thought from Balochistan.

Sherani who remained JUI-F’s head of Balochistan chapter had part ways with Maulana Fazkur Rehman and formed his own group in December 2020. On the occasion, Sherani said he had “inherited politics from great leaders”, announcing the separation of what he claimed was the original party from Maulana Fazlur Rehman’s group.

The development came days after Sherani, as well as Hafiz Hussain Ahmed, another senior JUI leader, were expelled from Fazl’s faction over controversial statements against the party leader.

Sherani had said Fazlur Rehman formed his “own group called the JUI”, clarifying that neither he nor his followers were ever a part of the JUI-F or the faction created by Fazlur Rehman.

“We have always been and will always remain members in accordance with the constitution of Jamiat Ulema-e-Islam,” Sherani, the former chairperson of the Council of Islamic Ideology (CII), stressed.

‘Devoid of truth and honesty’

The former CII boss underlined that none of the JUI-P’s members would ever take any action against the teachings of Qur’an and Sunnah and that his companions needed to make their own decisions as to “whether to please God or to follow their own desires”.

“What is happening now is devoid of truth and honesty,” he said, slamming Fazlur Rehman for differences among the party.

“We have inherited politics from great leaders [but] these members are no longer members of this party,” he added.

No political worker would be pressured under the JUI-P’s party discipline, Sherani underscored. “God’s curse is on liars and traitors.”

Speaking of future action, he said there would be three points and another seven on “our role in this regard”. “First off, no one will take any step against the Qur’an and Sunnah; no political worker will be forced to do any work; and we should encourage all colleagues not to break with the party or be stubborn.

“We tolerate and listen to what people say about us but we will try to isolate such liars,” he added.