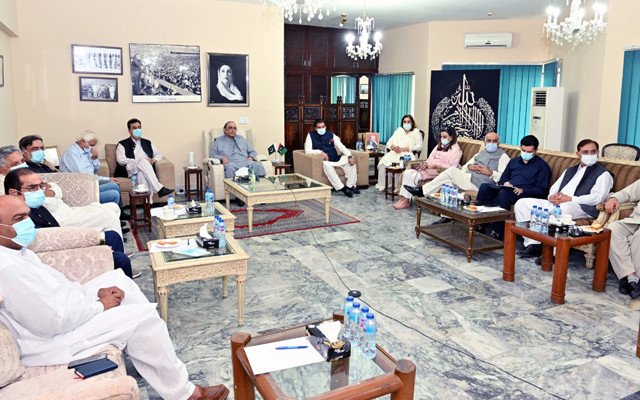 ISLAMABAD: Pakistan People’s Party (PPP) has stepped up efforts to gather political support for opposition to the secret dialogue with banned outfit of Tehreek-e-Taliban Pakistan (TTP).

In this regard, the PPP leadership on Sunday constituted a three-member special committee to reach out other political parties and win their support over the recent developments in Pakistan’s talks with the TTP.

The special committee would comprise of Qamar Zaman Kaira, Senator Sherry Rehman and Farhatullah Babar, according to a statement issued here.

Per the statement, the People’s Party has stated that it will raise the issue, jointly with other parties, in the Parliament.

It merits mention that the People’s Party on Saturday decided to reach out to its allied parties to build a consensus on the way forward amid talks with the Tehreek-i-Taliban Pakistan (TTP).

A high-level meeting was held at Zardari House in Islamabad under the chairmanship of the party’s co-Chairman Asif Ali Zardari and Chairman Bilawal Bhutto Zardari.

Taking to Twitter, Bilawal Bhutto Zardari said that PPP held a high-level meeting to discuss the issue of terrorism, particularly in light of recent developments in Afghanistan, with the TTA (Tehreek-i-Taliban Afghanistan) and TTP.

“[The] PPP believes that all decisions must be taken by parliament. Will be reaching out to allied parties to create consensus on the way forward,” the foreign minister wrote on Twitter.

Experts however are closely monitoring the situation, arguing that being a part of the coalition government and having its leaders a part of the federal cabinet, the PPP leadership first should have hold a meeting with Prime Minister Shehbaz Sharif and discuss the issue before going public with its concerns.

Shehryar Khan Afridi, former state minister for Interior and Chairman Kashmir Committee, told Pakistan Today that the PPP’s act is a mere eyewash as the PPP and the PML-N are top parties in the ruling coalition and they are partners in all crimes being committed against the people of Pakistan.

“It’s amazing to note that a sitting foreign minister of the country is portraying that he has been kept in dark over dialogue with the ruling party of Afghanistan. If Bilawal is in dark, who is to be blamed for his failure and why he is not taking the nation into confidence and resign,” argued Shehryar Afridi.

“The move of the PPP actually is a bid to save itself from public anger due to unprecedented price hike and record inflation,” he said.

A cabinet member, requesting not being named, said that it would have been better for the PPP leadership to share their concerns first with Shehbaz Sharif, the premier.

“Going public with its concerns without consulting the premier, who is an ally of the PPP, was bit indecent act. But the start of efforts to galvanizing political support over the subject without meeting Shehbaz Sharif reflects that the PPP is either involved in politics of blackmail or it wants to ditch the ruling alliance,” the minister concluded.