The PTI brand– a case study 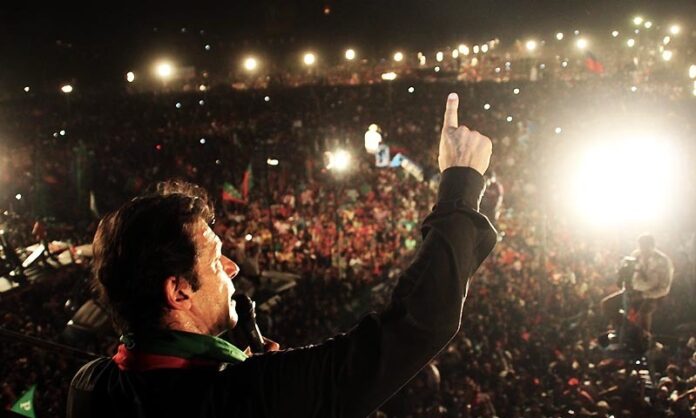 The last three months have seen one of the most sweeping changes in the political arena of Pakistan. Indubitably, the most phenomenal change, however, is the unprecedented transformation of the acutely dwindling popularity of Imran Khan and his party into a populist movement.

In the first week of April, owing to high inflation, drastic devaluation of rupee and soaring unemployment, Imran Khan’s popularity was at its lowest ebb. Particularly, the disgruntlement in the lower middle class of the society had reached boiling point. This was perhaps one of the key factors, apart from the “go-ahead” from the powerful quarters, that encouraged his opponents to join hands to throw the PTI out when the public sentiments were significantly against Imran Khan and his debauched governance. The PDM leadership was quite confident that Imran Khan, once out of the corridors of the Prime Minister House, would not be able to generate any kind of effective agitation against the new government.

Prime Minister Shehbaz Sharif, famous for being a hard taskmaster with a proven track record of initiating and completing “projects” within the tight deadlines, was overconfident that his traditional style of brinkmanship in the first few weeks would overshadow and muffle the possible reaction from PTI.  Majority of the political pundits and analysts were also expecting Imran Khan to have a lukewarm response from his supporters after his much-dramatic ouster from power.

However, to the utter surprise of all the stakeholders, including Imran Khan himself, the PTI has suddenly emerged as a significantly popular political force in Pakistan within the span of just two months. From a pure academic and marketing perspective, the swift brand transformation of the PTI offers a lot of interesting learning points for the students of marketing as well as political analysts. There have been very few examples in the marketing text books where any brand has shown such a gargantuan enhancement of its “positioning” and “value proposition” in such a short time.

The PTI brand– or to be more exact, the brand Imran Khan– has shown a real “turnaround” (in marketing vocabulary). The whole saga started with Imran Khan’s speech to a massive gathering in Islamabad on March 27 when he was desperately trying to mobilize public support to pre-empt the impending no-confidence motion of the then Opposition. Honestly speaking, by March 27, Imran Khan had practically lost his majority in Parliament as most of his allies had publicly deserted him to join PDM to dislodge him as the Prime Minister. At that time, it was all clear to everyone that the PTI would not be able to muster enough MNAs to quash the no-confidence motion. The PTI government, with a huge baggage of four years of incompetence, numerous stories of corruption scandals, nepotism, skyrocketed inflation and bad governance, was desperate to find a face-saving formula in the aftermath of the no-confidence motion.

The PTI brand was at the weakest phase of its life cycle in the last week of March. Imran Khan’s slate was empty as far as his four-year stint was concerned. There was nothing that he could claim as a tangible and effective “achievement” to motivate his supporters. In desperation, the PTI’s communication and marketing team came up with the idea of playing the “patriotism card” to charge up the public against the so-called American conspiracy.

On March 27, while addressing the gathering in the Parade Ground Islamabad, when Imran Khan waved an alleged letter in the air by claiming that it was a proof of the “American intervention” behind his ouster, it turned out to be the tipping point for the brand PTI and changed the whole complexion of the domestic politics. In a highly professional way, the PTI communication team utilized a routine internal diplomatic wire as a marketing tool to galvanize the public sympathies for Imran Khan. It is certainly one of the most powerful examples in marketing how to strengthen the brand and enhance its “positioning” on an ostensibly petite point/feature and blowing it out of proportion through an effective communication strategy.

Three factors, appar87ently, have contributed to this effective marketing campaign of PTI. The first factor is the personal branding of Imran Khan himself. Among his supporters, Imran Khan has been positioned as an honest, sincere, brave, macho celebrity. This positioning of Imran Khan is the main differential advantage when compared with his political opponents, whose pasts have been tainted with innumerable allegations of corruption scandals. There is no doubt that a vast majority of the urban middle and lower middle class (particularly the people around their 50s who have grown up seeing Imran Khan as a national hero winning the cricket World Cup) have been positively impressed by the personal charisma of Imran Khan.

At the same time, despite being nearly 70, Imran Khan has cultivated his image as a “young leader” and his followers are popularly labelled as “Youthias”. This is very powerful positioning that has helped Imran Khan to build cult-like devotees among his supporters who always blindly defend his frequent U-turns and contradictions. Despite apparent flaws and incongruities associated with the diplomatic communication regarding the so-called American intervention, Imran Khan’s personal credibility as an “honest and brave” leader has won him the exceptional support for his protest campaign – Imported Government Na-Manzoor.

The second factor is the consistency of physical presence and engagement with his target audience. Ever since Imran Khan’s departure from office, he has been continuously busy in protest jalsas, press conferences, interviews, video messages and web speeches. He has toured the entire country and conducted 22 major public gatherings so far to mobilize his supporters. He is showing his face daily to the public through a very effective engagement campaign

This daily engagement with the public has helped him to consistently connect with his target audience and build a momentum for his anti-American narrative – “Imported Government Na-Manzoor”. Despite his unabating contradictory statements and U-turns in his daily sermons, the majority of his supporters are vehemently defending his blatant contradictions and illogicalities.

The cult-like behaviour of his supporters is not a new phenomenon in our political history. Zulfiqar Ali Bhutto and Altaf Hussain had a similar kind of influence among their supporters, but the speed with which this cult-like behaviour has become contagious among his supporters in the middle and upper middle class is reflecting the success of his campaign managers. As they say in the textbooks of marketing, consistency is the key in hammering the brand into the minds of the target audience. The same tactic is being aggressively employed by the PTI team. The daily appearance of Imran Khan on different platforms has immensely helped him to keep the PTI brand (the brand Imran Khan) reinforced on a daily basis.

The third contributing factor behind PTI’s brand building is the highly organized and effective social media team. There is no doubt that, despite not being a tightly knit political party like the Jamaat Islami, the PTI has established a very efficient and resourceful team to influence the public opinion through social media. No other political party in Pakistan has utilized the social media as effectively as the PTI.

Courtesy some of the big media houses, the PTI social media team has been turned into a formidable propaganda apparatus. Nowadays every brand needs a continuous reminder to the target audience through psychosomatic stimulations in the form of audiovisual content in the electronic media as well as social media. This is exactly what the PTI social media team has done consistently to the brand Imran Khan, which is actually synonymous with the PTI brand.

The PTI social media team has not spared anything to keep alive the PTI and Imran Khan in the minds of the target audience through all kinds of manipulation. Right or wrong data, fake or original accounts, the PTI social media has resorted to all sorts of tactical measures to build the brand image of Imran Khan– and the PTI– as a hero who possess all the superlative qualities.

None of the other political parties have been able to use the modern marketing practices to build the party and its leader’s brand the way the PTI has done. This is the fact that, with the help of the PTI social media campaign, Imran Khan’s positioning as an “honest and brave leader” has become extremely well-entrenched among his supporters. Very interestingly, under the new slogan of “Imported Government Na-Manzoor”, the PTI social media team has very shrewdly diverted the attention from the extremely poor performance of its past four years in the power.

Imran Khalid
The writer is a freelance columnist