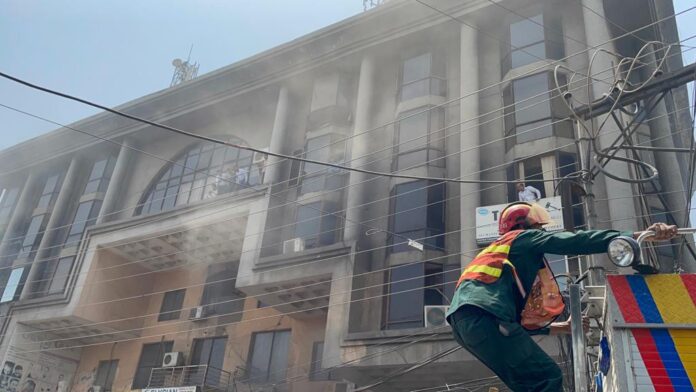 LAHORE: One person died and another was wounded on Tuesday when a fire broke out in the basement of a corporate centre in the Queen’s Road neighbourhood of old Lahore.

Five fire engines were dispatched to Rehman Plaza after the Rescue 1122 was called at about 12:46 pm, the agency’s Public Relations Officer Farooq Ahmad told Pakistan Today. He said part of the basement of the multi-storey building was alight.

Once the teams reached the site, they found out that 23 people were trapped on the second and third floors of the building. Ahmad said they were able to rescue 21 of them.

Two people received burns before firefighters put out the blaze. They were shifted to nearby Sir Ganga Ram Hospital where one of them succumbed to his wounds.

A second Rescue 1122 official said teams were able to extinguish the fire at about 2:20 pm, but added the cause of the fire was under investigation.

Images and videos posted on social media showed smoke billowing into the air and flames lapping part of the roof.

Police have advised people to avoid the area around the building which houses, among other businesses, a branch of the state-owned National Bank of Pakistan (NBP).

According to Ahmad, 16 vehicles — including five fire engines, four ambulances and a truck with a snorkel ladder — and 50 rescuers took part in the operation.

Ahmad Saad
The writer is a member of the staff.