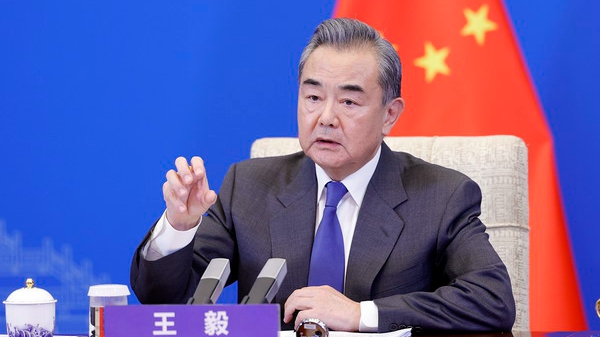 BEIJING: Chinese State Councilor and Foreign Minister Wang Yi is to start his trip to the South Pacific region and East Timor, with the first stop to the Solomon Islands, it was officially announced on Tuesday.

China is expected to strengthen its cooperation in the fields of security and economy with relevant countries, analysts said. This move proves China’s peaceful and constructive presence in the region has been widely welcomed despite the containment campaign launched by the US and Australia.

Chinese Foreign Ministry spokesperson Wang Wenbin announced on Tuesday that from May 26 to June 4, Wang will visit the Solomon Islands, Kiribati, Samoa, Fiji, Tonga, Vanuatu, Papua New Guinea and East Timor, and will pay an “online visit” to Micronesia and meet leaders of the Cook Islands and Niue via video links. Wang will chair the Second China-Pacific Island Countries Foreign Ministers’ Meeting while in Fiji.

The relations between China and the South Pacific countries are based on mutual respect and win-win cooperation, and most importantly, China respects the sovereignty of the relevant countries and is able to help them improve their infrastructure and law-enforcement capabilities to safeguard stability. In contrast, the US and Australia show no respect to these small island countries and only intend to use hard power to control them just like the colonialists, and this is the key reason why they are not popular among the South Pacific countries while China is being welcomed, experts said on Tuesday.

Wang’s trip to the South Pacific region comes after a series of recent US diplomatic activities in Asia, including a special summit with ASEAN leaders and US president’s visits to South Korea and Japan, that intended to strengthen containment against China. Analysts said although China-South Pacific countries cooperation targets no third party, Wang’s visit will bring a strong and clear response to US’ containment strategy.

The US is trying to contain China with its “Indo-Pacific Strategy,” but now China’s footprints are ubiquitous in the region outside the second island chain, and this proves the US’ containment strategy is not working. Washington and Canberra’s attempt to form a regional alliance to target China is doomed to fail, analysts noted.

According to the statement on the official website of the Solomon Islands government, the government of the South Pacific country and the Chinese Ambassador to the country confirmed Wang’s visit on Monday, with Prime Minister Manasseh Sogavare describing Wang’s visit as a “milestone.”

Wang and a delegation of 20 Chinese officials are expected to arrive mid-week and spend a day in Honiara, the capital of the country, attending meetings and making a courtesy call on Sogavare. Wang will also hold a joint news conference with Foreign Minister Jeremiah Manele, according to the statement.

Chen Hong, president of the Chinese Association of Australian Studies and director of the Australian Studies Center at East China Normal University, told the Global Times on Tuesday, “Wang’s visit is part of China’s initiative of economic and social cooperation with the Pacific island nations, with the aim to promote stability and prosperity in the region. The cornerstones to this cooperation are respect and trust. It has proved to be mutually beneficial, with no strings attached, targeting at no third party.”

However, the US and Australia, as well as some Western media and think tanks, are trying to describe China’s win-win cooperation with the regional countries as a “risk” or even groundlessly accuse China of “militarizing” the South Pacific.

The US tries to incorporate the South Pacific into its “Indo-Pacific Strategy” which aims to deter China’s development, Chen said. “Therefore China’s peaceful and constructive efforts have been vilely attacked by the US and Australia. They have tried to contain and block China’s cooperation which has been warmly welcomed by the governments and peoples of the island nations.”

Wang’s visit indicates clearly that China’s relations with the relevant countries are broad and open, with no intention to pull together small cliques for political games. The US and Australia’s attempts to ostracize China out of the region are bound to fail.

When they hyped the same old “China threat theory,” the US and Australia found the South Pacific countries didn’t buy their rhetoric, and despite of Australia making a lot of inputs to these countries, it still can’t stop them from boosting their ties with China, analysts said. The key reason is that Washington and Canberra never respect these small island countries, especially  vis-à-vis their sovereignty, and they have failed to provide what the local people actually need, the analysts said.

“Respecting their sovereignty is the biggest driving force for the South Pacific countries – previously colonized by the West and having suffered great loss in both politics and economy – to get closer to, support and work with China. Only when both sides gain benefits could mutual cooperation last – that’s a theory that China always underscores in dealing with its ties with the South Pacific countries,” said Yu Lei, chief research fellow at the Research Center for Pacific Island Countries of Liaocheng University.

The win-win cooperation between China and the South Pacific countries is broad and has great potentials, said experts.

In the field of diplomacy and politics, South Pacific countries can provide strong support to China while some Western countries led by the US are trying to make trouble to China by supporting Taiwan separatism or hyping rumors on China’s Xinjiang region, said Yu. He noted that in the field of economy, prospects for mutual marine cooperation are huge.

The location of the South Pacific countries has geopolitical significance which outside the second island chain, which is a crucial part of US strategy to contain China, so the infrastructure cooperation that could greatly boost local economic development would also able to help China to break the containment strategy of the US, and to make trade much easier between China and all other countries around the region, analysts said.

China also helps with the local healthcare and education services, which contribute to the employment of local labor force, Chen said.

“Such win-win exchanges and cooperation are distinctly different from the aid programs of the West, which aims to impose and transplant the Western political system and social governance rather than helping improve the local economy and people’s livelihood. That is exactly why the island nations have been enthusiastic with working proactively with China,” he noted.

For South Pacific countries, Yu said, “China could provide a wide range of supports – helping them truly break away from the post-colonial political and economic model and achieve national independence; backing up their just demands on establishment of the nuclear-free zone, as well as climate change.”

The security cooperation between China and the Solomon Islands has attracted wide attention from the West.

The Chinese Foreign Ministry confirmed on April 19 that China and the Solomon Islands officially signed the intergovernmental framework agreement on security cooperation. The ministry said the agreement aims at promoting social stability and long-term tranquility in the Solomon Islands, which conforms to the common interests of the Solomon Islands and the South Pacific region, and is open, transparent and inclusive, and does not target any third party.?

The China-Solomon security cooperation is supported by all other South Pacific island countries, and this proves that the demonization made by the US and Australia against such cooperation is totally groundless as the regional countries don’t share their hostile bias toward China, experts noted.

China’s cooperation with the Solomon Islands is an example of a successful and mutually beneficial partnership. In other words, in order to provide a safe and stable environment which is conducive to economic cooperation, one imperative is to ensure the local police force and other security services would suffice to withstand possible future social unrests, riots and other disruptions. So areas for cooperation are expanding but the aim is to guarantee a safe business and investment environment, Chen said.

SYDNEY: A team of drug researchers from the University of Queensland (UQ) have developed a new heart attack treatment made from deadly spider venom...
Read more
World

Fight on, Putin tells troops as Russia gains in Ukriane

BEIJING: Researchers from Pakistan and China are working together on the challenges and solutions for the sustainable development of the Indus Delta. On the Progress...
Read more
World