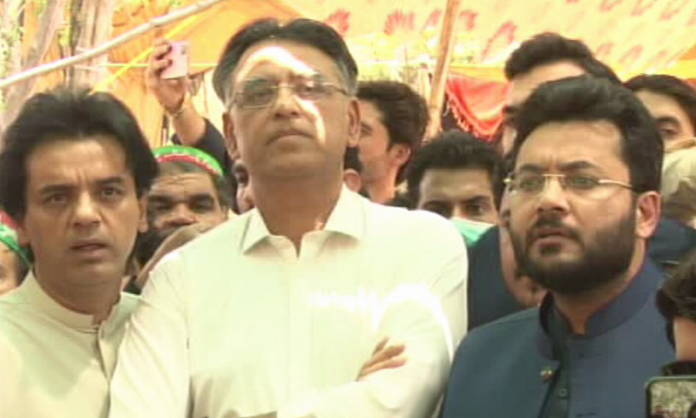 Former federal minister and Pakistan Tehreek-i-Insaf (PTI) secretary general Asad Umar on Saturday warned the government that it will be responsible for the response if former prime minister Imran Khan is arrested.

Talking to media, Asad said if power is used then same reaction will be given. He further questioned: “If Maryam Nawaz can be given security then why not Imran Khan?”

Imran Khan and PTI believe in peaceful politics and the rule of law, he said. “PTI never attacked the Supreme Court, never created a bench at the Quetta registry and then orchestrated a decision against a sitting chief justice of Pakistan, never attempted to [hijack] the plane of a serving army chief.”

Instead, the party and Imran Khan’s strength lay in the country’s people and the PTI chairman has “no intention of using violence”, he added.

He said the protection of the head of Pakistan’s “largest political party and future PM” is the responsibility of the government.

Earlier in the day, PTI leader Usman Dar claimed Islamabad Police reached Imran’s Banigala residence with a prison van but went back after seeing a “huge number of Imran’s tigers”.

“Listen carefully! We’re not afraid of the prison van. We ran a trailer in Sialkot, the film is still left,” he tweeted.

Earlier this month, Imran had said while addressing a rally in Sialkot that his life is in `danger and that he has recorded a video in which he has taken the names of all those who “conspired against me” since last summer.

“There is a conspiracy hatched against me in closed rooms in and outside the country, and they want that Imran Khan’s life [is lost],” he had said. “I knew of this conspiracy … so I have recorded a video and kept it in a secure place. If something happens to me then this video will be [made public]. In it, whoever has conspired against me, whoever is complicit since last summer, I’ve named everyone.”