How does the Myanmar coup jeopardize regional security? 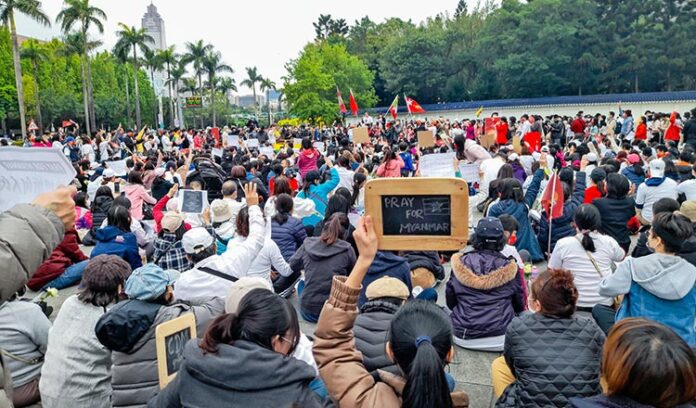 Almost 30 years have passed since the official end of the Cold War, but the world has not been able to come out of the tensions and political-military polarization. The battle then was between the ideological and the now defunct USSR and the USA. And the main battlefield was Eastern Europe.

Under the changed circumstances, China has risen to compete with the USA, and the conflict has spread indirectly and directly from Afghanistan, the epicentre of the conflict, through the South China Sea to the vast waters of the Asia-Pacific and coastal countries. As a result, the Bay of Bengal and adjoining countries have also come to the fore in terms of geopolitical strategy. In addition to the US global agenda for democratization and human rights, China’s financial stimulus measures are also gaining momentum in order to expand the sphere of influence in the country. Against this backdrop, the military coup that took place in Myanmar exactly one year ago has attracted special attention not only in that country but also internationally and regionally.

The military coup in Myanmar was a shock to the current world order. Myanmar’s military junta not only ousted elected leader Aung San Suu Kyi in early 2021 amid a global pandemic crisis, but also locked down the country’s critical areas of democracy, rule of law and human rights. On 1 February 1 2021, Myanmar’s leader Suu Kyi, the government and the ruling NLD’s top leaders were arrested and power was seized by Army Chief Senior General Min Aung Hlaing. Suu Kyi’s party won a landslide victory in the November 2020 elections. Military intervention immediately undermines democratic achievements and the rights of the people.

Surprisingly, the people of the country have been seen playing a more progressive role than the international response and resistance. For the first time, effective resistance has emerged among the people of Myanmar, tired of the experience of long military rule. This has turned into a series of armed rebellions, albeit at a lower level in the experience of the last one year. The post-coup protests by anti-junta democrats were the biggest chapter in the country’s history, with the military junta in a tough position to suppress them ruthlessly with bullets and guns.

But despite the violence, the movement turned violent, with many analysts describing the situation as “Myanmar’s civil war.” The protesters had to pay a high price for the repression of the army. Yet they are not going away. According to various observer agencies, about 1,500 people have been killed so far by security forces, and about 8,800 have been detained. In addition, an unknown number of victims have been tortured and disappeared. More than 0.3 million people have been evicted from their homes in army raids in several villages in search of the roots of resistance.

Myanmar’s one-year experience of military rule has put peace, security and stability in the region at risk, as have violations of democracy, human rights and the rule of law inside the country. Moreover, the confluence of countries in South and Southeast Asia poses an extreme security risk.

The brutal crackdown on the Rohingya in Myanmar, as well as other ethnic minorities, continues with the harshest consequences of the suppression of the democratic movement in a short span of one year, spreading panic like a blazing flame of regional peace, security and stability. Other consequences of the army’s seizure of power are also significant. The non-cooperation movement against the junta has affected transport, banks and various government agencies. An economy devastated  by the coronavirus has slowed further. The fight against the coronavirus was abandoned for months as the government health system collapsed. Higher education in Myanmar has also been disrupted by class boycotts or arrests of teachers and students sympathetic to the protests.

In fact, the level of resistance that developed was beyond the reach of the military government. In the first few days after the coup, it generally tried to quell the protests. The generals refused to implement any major changes. They claim that only Suu Kyi has been removed from power. Even then there were huge protests in that country. They have been ruthlessly suppressed. In this way, people have turned onto the path of armed struggle.

The army has used the same ruthless tactics in rural areas to suppress protests, which have been carried out in the border areas against minorities through inhumane, ethnic-genocide. Urban protests have escalated to avoid the repression of the junta. Rural areas have also become places of conflict. Local militias are waging guerrilla war against the junta. The people of Myanmar have declared that democracy is the last word, not military rule.

Although Myanmar emerged as an independent republic from British rule in 1948 in the spirit of anti-colonial democracy, it has been under military and dictatorial rule for most of the last 63 years. In 1972, General Ne Win overthrew Unu’s government in a military coup and abolished Myanmar’s democratic federal system, nationalizing the economy in the name of “socialism of its own.” And the country’s independent media was banned by establishing a one-party system of government called the Socialist Program Party. With the military coup of 1962, the country was completely taken over by the army.

From 1962 to 2021, Myanmar occasionally tasted democracy, but it was a ‘shadow democracy’ wrapped around the military’s power. Myanmar’s civil rights, human rights and the dignity of minorities have been trampled underfoot by this militarism and the boot of Myanmar’s military. Military rule in the name of amending the Constitution.

The devastating effects of the Myanmar incident are being felt in India as well as in Bangladesh. Recent political upheavals have also been a source of concern for regional security. According to a report by Reuters on June 10, 2021, thousands of Myanmarese have fled to Mizoram, Manipur and Nagaland in India. So far, about 16,000 people have taken refuge in these areas. The largest numbers of people have taken refuge in the dense forests along the Tiao River in Mizoram, where pro-democracy fighters are also reported to be present. It is known that there were various terrorist groups in this region from the east. There are also fears that these terrorist groups could use the refugees to carry out various activities. Myanmar’s refugee problem could pose a new threat to India’s regional security as well as border security, militancy and the resumption of diplomatic relations between India and Myanmar.

The ongoing crisis in Myanmar has begun to ignite on the border with neighbouring Thailand. Myanmar’s military says thousands of villagers have fled their homes and sought refuge in Thailand following airstrikes in the state of Karen. When Thailand initially tried to repatriate them, they took refuge in the jungle on the banks of the Salween River, near the Thai border. Occasionally, Karen National Union (KNU) forces clashed with the army. KNU members have been trying to use the Thai border in various ways to carry out their activities, which is a major concern for Thailand’s security.

Myanmar’s one-year experience of military rule has put peace, security and stability in the region at risk, as have violations of democracy, human rights and the rule of law inside the country. Moreover, the confluence of countries in South and Southeast Asia poses an extreme security risk.