Both countries need what the other can give 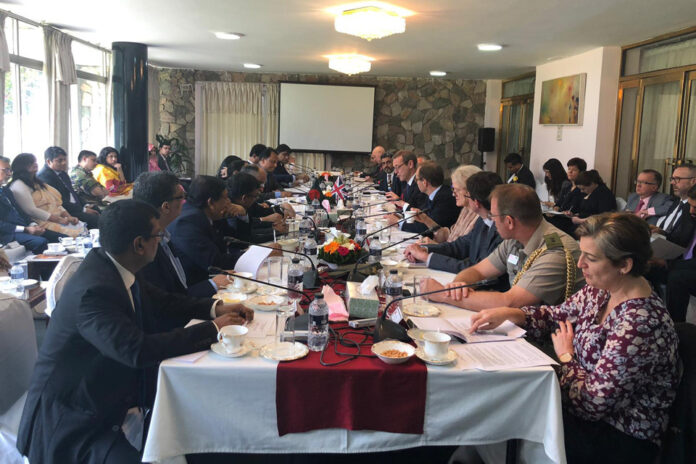 50 years ago, diplomatic relations were established between the UK and Bangladesh on February 4. The UK has played an important role in the history of Bangladesh. Before Bangabandhu Sheikh Mujibur Rahman set foot on the soil of independent Bangladesh, during his historic visit to the UK in January 1972, he forged a new friendship with the then British Prime Minister Edward Heath which accelerated Bangladesh’s recognition as an independent country. This historic visit has encouraged other Commonwealth countries to recognize Bangladesh as an independent country.

With the establishment of a British High Commission in the capital of independent Bangladesh in 1972, the then Foreign Secretary of the UK Sir Alec Douglas-Home visited Bangladesh. Since then, the UK has been a committed partner in Bangladesh’s research, healthcare, social development, disaster risk reduction, poverty alleviation, education improvement, life expectancy of women and children, and women’s empowerment. All this has helped in the significant progress of Bangladesh in the last 50 years. The UK has helped build the capacity of Bangladesh’s military, police, and government officials.

Queen Elizabeth II visited Bangladesh in 1973. During that visit, she traveled by train in Bangladesh to visit an ideal village 35 miles south of Dhaka. Over the past few decades, the Prince of Wales, the Princess Royal, Prime Ministers John Major, Tony Blair, and David Cameron visited Bangladesh to witness an emerging nation. Throughout this period, Bangladesh and the UK have worked together to tackle poverty, floods, and severe cyclones, and this has deepened the relationship between the two countries.

The two-day first defense dialogue between Bangladesh and the UK continued at the Armed Forces Division in Dhaka Cantonment from March 2-3 which would provide an opportunity for extensive discussions on bilateral defense and military cooperation.

A 24-member Bangladesh delegation led by Brigadier General Hussain Muhammad Masihur Rahman, Director General of Operations and Planning of the Armed Forces, participated in the defense dialogue. Brigadier General Mohammad Mahabubur Rashid, Defense Attaché of the Bangladesh High Commission to the UK, took part in the dialogue as a guest.

A five-member delegation led by Ms Trish Wilson, Head of International Security at the UK Department of Defense, took part in the defense dialogue. His Excellency Robert Charterson Dixon, High Commissioner of the UK to Dhaka was present on the occasion.

The British High Commissioner in Dhaka, who took part in the dialogue, issued a statement. There, High Commissioner Robert Chatterton Dixon pointed out that the Indo-Pacific issue was also on the defense dialogue. According to the High Commissioner, both Britain and Bangladesh want a free, open, peaceful, secure, and inclusive Indo-Pacific. “We are delighted to be able to launch the UK-Bangladesh Defense Dialogue,” he said in a statement. “During the independence of Bangladesh 50 years ago, the foundation of our bilateral defense relations was laid, which has only gotten stronger day by day. The dialogue has provided an important opportunity for us to further develop and expand this relationship over the next 50 years. In it, we discussed peace and security. That’s why I’m happy. In the defense dialogue, we have identified many areas for our future and cooperation. These efforts will make important and much-needed contributions to global peace and security.”

Meanwhile, the Inter-Services Public Relations (ISPR) said it was the first defense dialogue between Bangladesh and the UK that would allow for a broader discussion on bilateral defense and military cooperation.

According to the ISPR, defense and security cooperation between Bangladesh and the UK are warm and intense. It was clear that the UK would continue to support the Bangladesh Armed Forces in defense development and training. Every year, many members of the Bangladesh Armed Forces are trained at various institutions in the UK. The two countries’ armed forces have been working together on UN peacekeeping missions and the war on terror. The exchange of military visits of senior officials between the two countries is a unique example of military cooperation. According to ISPR, this is the first military dialogue between the two countries, which is a landmark event. It will accelerate defense and military cooperation on global and regional security, technology, defense equipment, disaster response, peacekeeping operations, etc., and defense cooperation in training, training, inspections, joint exercises and deployments, workshops, and so on.

The defense dialogue could be considered as a major step forward in establishing multi-dimensional and strategic relations. The UK wants to see its presence in the Indo-Pacific on a larger scale and wants Bangladesh as a partner in the region. Bangladesh is currently the chair of the Indian Ocean Rim Association which has further increased its importance

According to media reports, Robert Dixon, the UK’s High Commissioner to Dhaka, said earlier that the fighter jet Eurofighter was a good investment to protect the country’s sovereignty. Again, modern technology ships like Offshore Trovas are effective vessels for the protection and extraction of marine resources of Bangladesh in the Bay of Bengal. The High Commissioner added also that after the settlement of the maritime dispute of Bangladesh, protection of marine resources and development of the blue economy is very important in the Bay of Bengal. The UK is keen to supply these weapons of modern technology if Bangladesh wants.

Calling for further strengthening of Bangladesh-UK bilateral relations, Bangladesh Prime Minister Sheikh Hasina said earlier, “It is time to rebuild Bangladesh-UK bilateral relations. We need to change our traditional approach to partnership.” The Prime Minister made the remarks while addressing a function titled ‘Bangladesh at 50: The Resilient Delta’ on the occasion of the 50th anniversary of Bangladesh’s independence at the British Parliament during her UK visits from November 3 to November 9. “Relations between the two countries should be truly strategic and co-operate in the areas of peacekeeping, counter-terrorism, maritime and air security,” she said. The Prime Minister welcomed the UK’s interest in partnerships in education, culture, research, and innovation.

Sheikh Hasina remarked that the role of the UK in resolving the Rohingya crisis is still important. She said, “Since August 2017, Bangladesh has stabilized the region by embracing the crisis on its own. But the security challenges in Cox’s Bazar are getting worse and worse. These challenges could soon spread beyond the borders to the region.” Recalling the responsibility of the international community, Sheikh Hasina said, “The international community has a responsibility to ensure the safe and dignified return of the Rohingya people to their motherland.

Bangladesh would buy five warships from the UK, said Foreign Minister AK Abdul Momen at a virtual press conference from the UK on November 5. Dr Momen said the UK wanted to send some naval ships to Bangladesh. The final decision in this regard will be made later. But we agreed in principle to take five ships. Of these, three will be made in the UK and the other two will be made in Bangladesh.”

According to the media reports, earlier, the Bangladesh Air Force purchased five C-130G Super Hercules military transport aircraft from the Royal Air Force, three of which have already been handed over. At Cambridge, Marshall Aerospace and Defense Group is building two more aircraft. They will be handed over by April 2022.

Bangladesh ranks 20th to 30th in world arms imports. China is still a major source of weapons and military equipment in the armed forces. Recently, Bangladesh is also importing some equipment from Turkey. Dhaka also brings equipment from Italy, Russia, the UK, the United States, France, and Germany.

The defense ties between the Bangladesh-UK are growing.  As a key member of NATO, the UK has experience in building weapons. Bangladesh has the defense capability and the UK is interested in Bangladesh’s Forces Goal 2030. The UK was the latest country to propose defense supplies to Bangladesh in the fourth strategic dialogue between the two countries in London on September 9.

The defense dialogue was organized in order to create opportunities for broader discussions on bilateral defense and military issues, including deployments, defense supplies, and procurement. The UK wants ‘a structured discussion’ on defense issues.

It is also important for Bangladesh to drastically increase the capacity of its armed forces for securing its borders, both land and maritime, and the airspace in line with the Forces Goal 2030.  Holding defense dialogues with the militaries of powerful countries is important for Bangladesh as security issues are becoming multidimensional with the inclusion of containing terrorism as well as violent extremism in the agenda,

The defense dialogue could be considered as a major step forward in establishing multi-dimensional and strategic relations. The UK wants to see its presence in the Indo-Pacific on a larger scale and wants Bangladesh as a partner in the region. Bangladesh is currently the chair of the Indian Ocean Rim Association which has further increased its importance.

The UK has its own Indo-Pacific strategy. Through this dialogue, both sides got an opportunity to know each other’s views on the issue.

Thus, the UK needs some alternative markets. The UK needs Bangladesh to sell its military gadgets. The recent Defense dialogue between France and Bangladesh is just an example to understand this.

Bangladesh is one of the most affected countries due to climate change and the UK has always supported the issue of justification for overcoming the damage. Apart from this, London has been supporting Dhaka in various forums including the UN Security Council on the Rohingya issue.
The dialogue could bring the UK and Bangladesh closer in the sector of security, trade, defense trade.