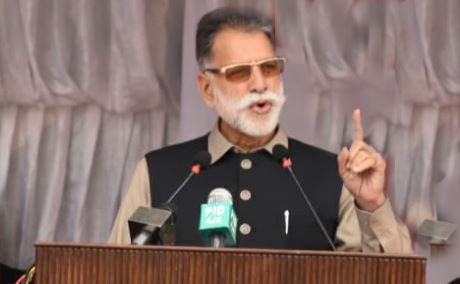 MUZAFFARABAD: Prime Minister Azad Jammu and Kashmir (AJK) Sardar Abdul Qayyum Niazi while urging party workers to gear up for the upcoming local body elections said that it has been agreed in principle to hold elections in July this year.

Prime Minister Niazi said this while addressing a reception hosted in his honour by Raja Qayyum at Kotli on Sunday. Presided over by Minister of State for Parliamentary Affairs Ali Muhammad Khan, the function was attended and addressed by Zafar Iqbal Malik Minister for Higher Education, Chaudhry Muhammad Akhlaq Minister for Finance and Custodian, Dr. Nisar Ansar Abdali Minister for Public Health, Raja Mansoor Khan Secretary General Pakistan Tehreek-e-Insaf Azad Kashmir and Raja Qayyum and others.

Speaking on the occasion, he said that a new era of progress and prosperity has begun in the liberated territory (AJK). “Mega development projects in different sectors have been initiated across the region”, he said adding that tunnels, highways, health care facilities were being constructed to improve the life standard of common man. He said that special focus was being given to promote tourism in AJK. He said that the dream of making AJK a prosperous and self-sufficient state would be achieved soon.

The development of the state, he said, was the responsibility of the PTI government.

“We are trying our best to fulfill our responsibilities”, he added.

Commenting on the worsening situation in the Indian held territory of Jammu and Kashmir, he said it was responsibility of the international community to play its role in resolving the lingering dispute peacefully. The PM asked if the international court of justice (ICJ) can hear the case of Indian spy Kulbhushan Yadav why it cannot hear the Kashmir case”. “I repeat the slogan of Syed Ali Gilani. We are Pakistanis. Pakistan is ours”, he added.