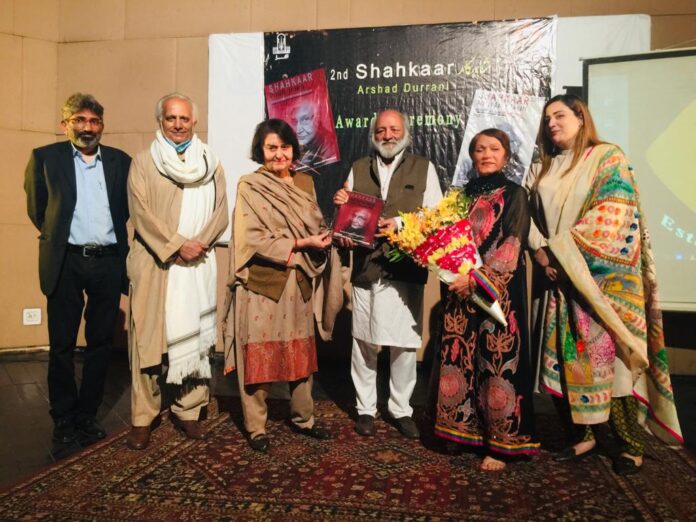 LAHORE: Legendary classical dancer Zarin Panna was bestowed the “Shahkaar Against All Odds Award” for her valuable contribution to the art of dance, despite personal and social challenges.

The award was given by retired Justice Nasira Javed Iqbal, chairperson of the jury, at a graceful ceremony held at Alhamra.

The awards were instituted in 2020 by Ajoka Theatre to honour the memory of Ajoka’s veteran actor Arshad Durrani and sponsored by his daughter eminent artist Sumaya Durrani and Shahkaar Higher Education Hub. The awards carry shields,  designed by Sumaya Durrani, and a cash award.

Zarin Panna said she was overwhelmed by the honour.

Video documentaries on Panna and Usman Zia and Late Arshad Durrani were screened during the ceremony. Sumaya Durrani in her video message talked about the objectives of the Shahkaar projects while  Ajoka Executive Director Shahid Nadeem thanked the jury and Lahore Arts Council for their support.

The highlight of the ceremony was Zarin Panna’s impromptu dance performance on audience request. Actor Usman Zia also performed scenes from his famous Ajoka plays “Dara” and “Bulha”. The event was attended by a large number of artists, film veterans and friends of Ajoka.