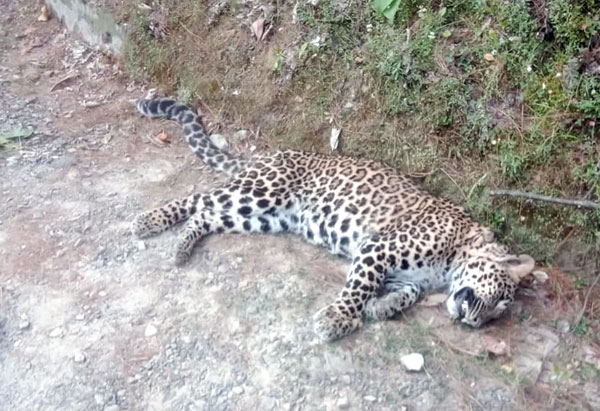 ISLAMABAD: A critically injured female common Asian Leopard rescued by the Wildlife and Fisheries Department Azad Jammu and Kashmir (AJK) on Sunday succumbed to the deadly bullet injuries during a full blooded rehabilitation effort carried out by the Islamabad Wildlife Management Board (IWMB).

The injured wildcat was brought on late Saturday night at the Islamabad Wildlife Management Board rehabilitation and rescue center in a critical condition, IWMB Manager Operations Sakhawat Ali told APP.

Sakhawat told that in view the situation and facilities in AJK, the IWMB Chairperson directed them to make arrangements for rehabilitation of the injured common leopard.

He said, the Chairperson was of the view that the Leopard could be shifted anytime from AJK to Islamabad as there were no better facilities in the Valley to continue her treatment.

As per the AJK Wildlife Department’s report, he said the Leopard’s leg was fractured and there was no x-ray facility to assess the damage for further treatment. Therefore, we made all arrangements for x-ray and surgery start her treatment within two to three hours, he told.

The leopards along with AJK Forest Department team reached at 12’O clock at night and at 1210 hours the x-ray was done, he noted.

While explaining the rehab efforts, Sakhawat told that after consultation with the vet, it was decided to remove the pellets and complete effort was done to remove it. “One bullet from her body’s periphery was removed but the rest of them were stuck in the gap between the vertebras and the beautiful animal, unfortunately perished during her surgery” he told.

In extreme remorse and regret, Sakhawat said no doubt it was a huge loss for us, adding, “She was an adult female of four to five years age as per the report of the vet. We all especially the entire team are very sad and shocked to see the demise of such a beautiful animal.”

The IWMB official remained from 10pm till 9am in the morning to oversight the rehab activities that were intended to save the beautiful endangered species.

The social media users on Facebook handle of the AJK Wildlife and Fisheries Department shared that the local masses found the injured female Leopard in Noseri area of Neelum Valley near River Neelum stuck in the freezing water stiriving to come out of it. After unsuccessful effort to rescue her, the locals after finding that the Leopard was hungry ffed her chickens to keep her survive till the Wildlife Department’s assistance was managed to rescue her.

Chairperson, IWMB Rina Saeed Khan on her Twitter handle shared that the Leopard’s x-ray revealed 5-6 pellets of an SG/LG cartridge fired from a 12 bore shotgun rifle in her body.

“Probably, a hunter tried to kill her as the Leopard was primarily shot from above as she came to River Neelum to drink water (all pellets lodged above). Evil act to shoot this innocent animal. We hope AJK wildlife will catch culprits.”

She further wrote, “We thank everyone for their cooperation. Thank you to AJK police and wildlife for rescuing her and bringing her to isd (Islamabad) in middle of rain/snow and thank you to vets Dr Basit, Dr Awais and Dr Amer Khalil (via phone) and IWMB staff for staying up all night with her and trying to save her until the end.

She still had so much life in her but spine damaged by shells and one in neck area and could not survive operation. We are heart broken but determined to continue our efforts to save and protect leopards in Pakistan!”

The IWMB Chairperson also shared the images of the x-ray of the Leopard and mentioned that the hunter in AJK used a 12 Guage shotgun and LG shot shell to hunt leopard for her skin/trophy.

“Pellets lodged in spine and neck area. Such beautiful eyes. She belonged in forests of AJK. Not so common leopards (critically endangered in Pakistan) MUST be protected,” she said.