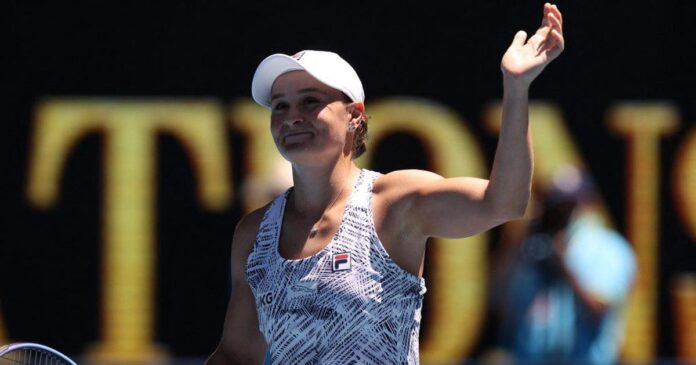 MELBOURNE: Women’s top seed Ashleigh Barty stayed on course for a potential fourth-round showdown with Naomi Osaka with a second flawless display at the Australian Open on Wednesday.

The ultra-consistent Barty, who won a warm-up tournament in Adelaide, hasn’t dropped her serve for 48 straight games over five matches this year.

“I felt like we had a good preparation in Adelaide. We played well, played throughout tough matches. (My coach) Craig Tyzzer is the master,” said the two-time Grand Slam champion.

“I feel like our whole team works extremely well together. We’re enjoying our tennis and being able to produce some pretty good stuff.”

Barty, who won Wimbledon last year, is potentially one win away from a last-16 showdown with defending champion Osaka, who plays American Madison Brengle in Wednesday’s night session.

But first Barty will have a much tougher task in the third round on Friday against seasoned Italian 30th seed Camila Giorgi, who beat Czech Tereza Martincova 6-2, 7-6 (7/2).

“She is an incredible ball striker and one of the most athletic girls out there,” said Barty of Giorgi.

It was Badosa’s seventh match in 10 days but the Spaniard said she was holding up well.

“(I feel) pretty good,” said the new world number six, who only broke into the top 20 for the first time in October last year.

“It wasn’t an easy match. It was a tricky match against Martina. We know each other since long time. She’s a fighter. I’m pretty happy about the win today.”

Nadal, who recently won his first tournament after five months out battling a foot injury, was highly impressive in racing past American Marcos Giron in straight sets on Monday to open his campaign.

“I am super-happy about all the work that we have done to try to be back. We are here enjoying the tennis,” said the Spanish sixth seed, who faces German qualifier Yannick Hanfmann for a place in the third round.

Nadal’s half of the draw was made easier when the unvaccinated nine-time champion Novak Djokovic was thrown out of Australia.

He safely came through a tricky late-night first-round clash against fellow German Daniel Altmaier despite not being at his best.

“It’s the first round of hopefully a very long Grand Slam, you are not always going to play your best tennis,” said the 24-year-old.

He will play Australia’s John Millman, who will garner plenty of partisan vocal support in another late-night encounter on Rod Laver Arena.

Seventh seed Matteo Berrettini, who endured frequent toilet trips in a gutsy four-set win on Monday, will hope he doesn’t need to reach for the Imodium again when he comes up against American qualifier Stefan Kozlov.