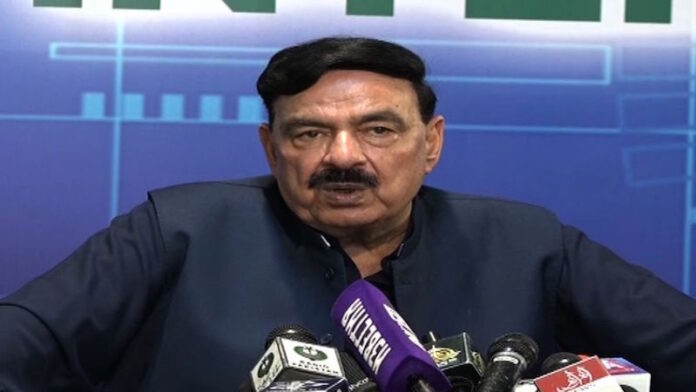 Interior Minister Sheikh Rashid said on Sunday that the potential no-trust motion against Prime Minister Imran Khan will fail as over two dozen lawmakers from the opposition benches will not support it.

Speaking about 12 government lawmakers who didn’t vote for the mini-budget in the National Assembly session held on Thursday, the interior minister told reporters that if the opposition wanted to bring a no-trust move against PM Imran Khan with the help of these members, then it should be ready to lose around 26 votes from its side.

He said that the in-house change will not happen and Imran will complete his five-year term.

According to Rashid, after April, the government will present a “friendly budget”, saying the next three months were very important.

He also said that the government was fully prepared to handle the long marches to be taken out by the anti-government alliance, the Pakistan Democratic Movement (PDM), and the Pakistan Peoples Party (PPP) in March and February, respectively.

The opposition parties are mulling the option of moving a vote of no confidence against PM Imran. On Wednesday, Pakistan Muslim League-Nawaz (PML-N) President Shehbaz Sharif met Jamiat Ulema-e-Islam-Fazl (JUI-F) chief Maulana Fazlur Rehman at his residence in Islamabad and the two opposition leaders considered bringing a no-confidence motion against the premier.

He also advised the opposition to consider the Omicron spread before starting a long march towards Islamabad.

The minister also downplayed the alleged rift in the Pakistan Tehreek-e-Insaf (PTI), saying Imran Khan is the sole leader of the PTI as he “singlehandedly built the party”.

Speaking about the deaths in Murree due to a blizzard earlier this month, Rashid claimed that had he not gone to the resort town, “30-40 people would have died” due to a lack of facilities in the hill station. According to Rashid, he spent two days in Murree to rescue the stranded tourists even though this was not the job of the interior ministry.

He also criticised former premier Nawaz Sharif for going to London, saying that Nawaz spent more time on efforts to escape to London than to oust Imran Khan’s government.

He reiterated that the Sharif family has no place in national politics anymore. “Earlier there were rumours of a deal but now there won’t be any deal either,” he added.

About the tough conditions by the International Monetary Fund (IMF) imposed in the recently passed Finance (Supplementary) Bill 2021 and SBP Amendment Bill 2021, Rashid said that Pakistan keeps going back to the IMF and with every package, the Fund has made its conditions tougher.