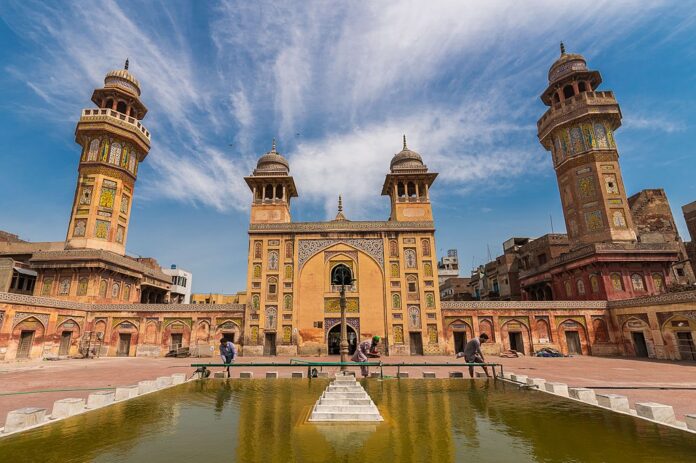 LAHORE: The restoration work of the 17th century historical monument Wazir Khan Mosque could not be completed by the Walled City of Lahore Authority (WCLA) while discrepancies in funds for the restoration of the mosque have also been revealed, Pakistan Today has learnt.

According to the details, despite the passage of five years, the dangerous crack in the facade of the mosque could not be repaired and procurement of various items could not be done.

According to further details, the responsibility of restoration work of Wazir Khan Mosque was given to WCLA five years ago so that this historical monument can be made useful for future generations.

However, in this regard, the project ‘Preservation and Restoration of Wazir Khan Mosque Lahore’ was approved by the Local Government & Community Development Department, Punjab at on April 2017 and the PC-I cost of the project was RS 550 million whereas the completion period of the project was five years [April 2022].

A sub-agency of the Punjab Planning and Development Board made severe observations on the project and the agency revealed in its report that despite the passage of five years, only 30 percent of the physical work on the project has been completed.

Similarly, acquisition of properties encroaching on the monument or into public space of Chowk Wazir Khan was done in RS 16.66 by utilizing only 6.5 percent of the given amount whereas the cost of RS 3.75 million was spent on the consultancy for infrastructure.

Moreover, there was no work carried out in terms of procurement, publication and capacity building showing 0 percent progress, the documents explained.

The documents also mentioned that total project cost was RS 555 million while the actual expenditure was RS 159.000 million and the financial progress was 28.7 percent and overall Physical Progress was 30 percent.

The documents stated, “The project was approved for PC-I amount of RS 555 million on 24-04-2017 with planned gestation period of 5 years ending on 23-04-2022. However, the work progress was slow at the project site and can lead to delay in project completion”.

The document  stated the scheme was behind the schedule. During Fiscal year 2018-19, RS 29.310 million was released against allocated amount of RS 20 million, which is a discrepancy.

“The rehabilitation works of prayer chamber were remaining and executing agency reported that the work was pending because of seepage issues from the adjacent houses. A crack was observed in the façade of the mosque, which needs to be properly investigated whether it is not expanding with time,” it said.

“The component of acquisition of land needs special attention as this activity is much behind the planned schedule. Encroachments are depicted. The procurement process including furniture, vehicle and equipment purchase was not started yet by the client department till the time of project site visit.  An amount of 15.000 million was allocated for survey of the monuments; however, no survey was conducted there”.

When contacted, Director Conservation and Planning of Walled City of Lahore Authority Najam Us Saqib, said that it will take another three years to complete the project.

“Basework of the frescos and other elements has been completed and now implementation will pick up speed. This is the main hard task and we have completed it, now the speed will be picked up,” he said.

“When we have requirements we shift funds from one project to another through proper channels by a summary through the Local Government Department and that is within the law. For procurement there were some approvals from the austerity committee and very soon we will complete this. Hujras were handed over to WCLA a week ago and now we will move on to purchase the furniture and fixture,” he added.

About the crack in the main façade of the Mosque, Najam said that it will be filled during the conservation work.