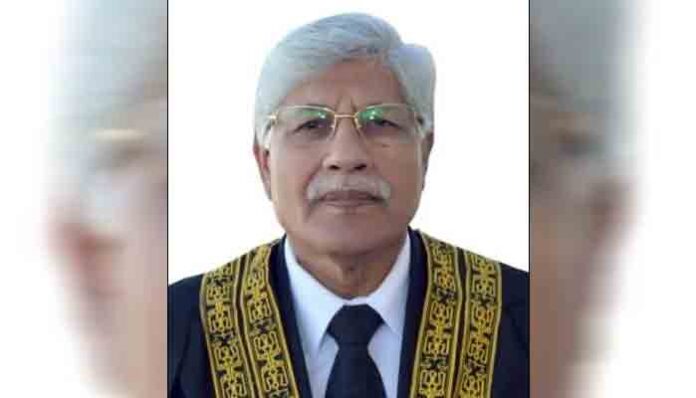 The Islamabad High Court (IHC) has deferred the indictment in contempt of court case against ex-chief judge of Gilgit-Baltistan (GB) Rana Shamim, Jang Group owner Mir Shakeelur Rehman and other senior journalists Ansar Abbasi and Aamir Ghauri till January 20 on Friday in connection with an affidavit that accused former chief justice of Pakistan Saqib Nisar of trying to delay the release from prison of top PML-N leadership.

As per the details, IHC Chief Justice Athar Minallah gave Shamim and the others time until the next hearing to “reflect” on the matter, saying “acceptance of mistake in front of the court increases honour.”

He further turned down Attorney General Khalid Jawed Khan’s request to allow Rehman who tested positive for COVID-19, to attend court proceedings virtually and said he would need to be present in court for the indictment.

In the last hearing, Shamim had opened his original affidavit, submitted earlier in December, on the court’s instructions. IHC Chief Justice Athar Minallah had asked Shamim if the document was the former judge’s affidavit and whether he had sealed it himself to which Shamim replied in the affirmative.

Subsequently, the IHC had decided to indict all the alleged contemnors on January 7 (today).

It is pertinent to note that in a written order issued last month, the IHC chief justice had appointed Attorney General Khalid Jawed Khan as prosecutor in the contempt of court case.

During the hearing, Justice Minallah observed that the court believed in the freedom of expression. He noted that a “narrative” was being built regarding a bench of the high court comprising him, Justice Mohsin Akhtar Kayani and Justice Mian Gul Hassan Aurangzeb — which is hearing a petition seeking the formation of an independent commission to ascertain the authenticity of an alleged audio of Nisar and probe certain events be­fore and after Nawaz Sharif’s conviction that judges “made decisions under pressure”. The people’s trust was being eroded because of such news items, he added.

Addressing Abbasi, Justice Minallah noted that Abbasi had said the newspaper would have published the affidavit even if it “may be wrong”. He asked if the newspaper did not know what case the story about the affidavit would influence, in an apparent reference to Maryam Nawaz’s ongoing appeal against her conviction in the Avenfield reference.

He further stated that the court was not questioning the journalist’s integrity but trying to make him realise the effect of the news story.

“Either you (Abbasi) say you did not know [about the influence the story would have] … let us frame charges, then you can present your stance,” the judge said in response to Abbasi’s request to not indict him.

Justice Minallah further observed that Justice Kayani and Justice Aurangzeb were part of the bench and the appeals were later heard by my bench, Justice Minallah noted. “This narrative can affect all three of us. The cases being heard by the [judges] mentioned in the story were fixed for two days later (from the date in the report).

He went on to add that the public’s rights were most important to the court. Recalling the details of the case, Justice Minallah said that a judge had allegedly spoken to CJP Nisar but he was not part of the bench hearing the case against Nawaz and his daughter.

“The court has tried to make you understand what mistake you made during the entire hearing,” the IHC judge said.

On the contrary, amicus curiae Nasir Zaidi, a representative of the Pakistan Federal Union of Journalists (PFUJ), appealed to the court to not frame charges and find a “middle ground”.

Addressing Abbasi again, IHC Chief Justice Minallah noted that the journalist had said the newspaper would publish an affidavit “even if it is false”.

“If we know it is false, we will report it as false,” Abbasi responded.

At this, Justice Minallah pointed out that there was a contradiction between Abbasi’s previous statement and the latest one.

Journalist Amir Ghauri said the newspaper also published statements made by the prime minister and ministers every day.

The judge noted that the affidavit should not have been published if the journalists did not know whether it was accurate.

“All affidavits in the Justice Iftikhar Chaudhry case were published. I did not mention the name of the high court in the story about the affidavit. I was careful but the court believed that all judges were made to look suspicious.

“Zaffar Abbas said that he would have done the same as Ansar Abbasi if he had gotten the affidavit,” the journalist contended.

Justice Minallah responded that it was just as well that Abbas did not publish the affidavit otherwise there would also be a contempt of court case against him, adding that Abbasi should have asked a lawyer about the effect of the affidavit.

Amicus curiae Reema Omer informed the court that it was necessary for a journalist to take adequate care when publishing a story, noting that Abbasi had also included Nisar’s version in his report.

“The journalist took adequate care to some extent when publishing the story,” she added.

Omer recalled that former IHC judge Shaukat Aziz Siddiqui had given a speech before the Rawalpindi bar in 2018 in which he had made remarks about the involvement of certain officers of the executive organ of the state, specifically the Inter-Services Intelligence (ISI), in the affairs of the judiciary to allegedly manipulate the formation of benches of the high court.

The court expressed anger at Omer’s reference to the former judge with Justice Minallah questioning, “Do you mean to say benches are made on someone else’s instructions?”

Omer replied that it was not what she meant whereafter the court asked her to return to her seat.

Advocate Faisal Siddiqui, who is an amicus curiae in the case, informed the court that a contempt of court case could be made against Rana Shamim but not the journalists.

He said there had been “negligence” on the part of the journalists in the publication of the news story but it was not tantamount to contempt of court. Abbasi should have waited to publish the news story and found out more information, he added.

Siddiqui asked Abbasi to step back from his present stance.

At this Justice Minallah responded that the problem was related to the journalist’s stance as well as the lack of regret.

He observed that the court’s judgements regarding the rights of the common man were broadcasted in the media, more so if the verdict was related to someone prominent. “A political narrative is created to erode the public’s trust in the court. Which judgement of this court has given the impression that it is compromised or that judges can be pressured?” he questioned.

Shamim’s counsel, Lateef Afridi, told the court that he had known Abbasi for a long time and the journalist only strove to “convey the truth to the public”.

He iterated that Abbasi had published the affidavit after receiving it from someone else because his client, Shamim, had not given the affidavit to anyone. He added that Abbasi’s actions in the present matter could be due to the journalist’s lack of knowledge.

The contents of the affidavit, as reported in the daily, cast aspersions on the IHC and its judges, and also prima facie appeared to be an attempt to influence the court’s proceedings, and obstruct and interfere with due administration of justice, wrote Chief Justice Minallah in an order issued on December 31.

He pointed out that the document was not part of any judicial record nor presented before any other authority. It appeared that the news report had been published by the newspaper without taking reasonable care.

According to the order, the timing of the affidavit’s execution and publication of a news report soon afterwards was a crucial factor because of its consequences for the pending judicial proceedings and administration of justice.

It initially appeared to the court that the role of Rehman, Ghauri and Abbasi was only to the extent of failing to take reasonable care before publishing a news report based on a leaked document. However, the stance of the latter two alleged contemnors is that they were justified in publishing a document, having no evidentiary value whatsoever, because it was in the ‘public interest’.

“This stance does not appear to be in consonance with the best international practices in the field of journalism,” the IHC’s chief justice wrote.

It is pertinent to note that several media bodies have expressed concern over court directives to indict the journalists, saying they should not be punished for merely performing their professional duties.

The IHC chief justice noted that Afridi, at the present moment, was arguing as an amicus curiae. “He wants to [ask us] to leave the journalists and take action against his client,” Justice Minallah added.

Meanwhile, Attorney General Khalid Jawed Khan contended that the stance from the first day was that the media’s role was secondary. “I am talking not in a political but legal sense,” he further said.

“A perception is being created for quite a while. I can say that the person creating this perception is not present in the court,” AG Khan said without specifying who he was referring to.

In the ‘leaked’ affidavit, on which journalist Ansar Abbasi’s report was based, Shamim allegedly stated that Nisar, during his visit to GB, made a call to an IHC judge and asked him to ensure that former prime minister Nawaz Sharif and his daughter Maryam Nawaz were not released on bail before July 25, 2018 general elections. The affidavit was published as part of an investigative report by The News on Nov 15.

Justice Minallah had subsequently taken notice of the report and later issued show-cause notices to Abbasi, Rehman, Ghouri as well as Shamim under the Contempt of Court Ordinance.