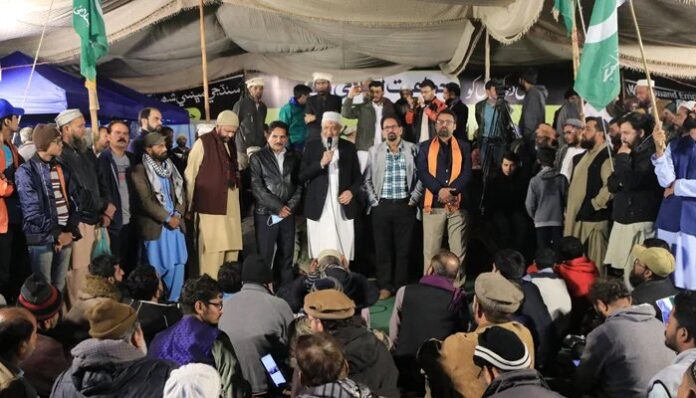 JI Karachi’ protest against the Sindh LG (Amendment) Bill 2021 witnesses completion of a week on Thursday. The party is determined to expand its protests across Sindh.

JI Karachi chief Hafiz Naeem-ur-Rehman stated that the Sindh government has not devolved its powers to the local government.

“With the powers that are left, the mayor cannot even sweep the streets”, Rehman stated.

While referring to PPP’s allegations, he stated that “we are not an ethnic-based party, and we do not promote ethnicity […] your (PPP) style of politics is indulging in corruption, while we believe in engaging the people.”

The JI chief further revealed that the party has decided to expand its protest across the rest of Sindh as it attempts to pressurise PPP in rescinding the recently passed controversial local government bill.

The announcement was made by the JI Sindh chief Muhammad Husain Mehanti who spoke at the sit-in camp outside the Sindh Assembly on Wednesday when the protest entered its sixth day.

“The protest camps against the black bill will be set up in all cities and towns of the province on Friday and Sunday,” he said, adding that the campaign against the provincial government would continue till the “anti-people” law was repealed.

Rehman stated that the Karachi Development Authority (KDA) had been placed under the authority of the local government setup, but the PPP had taken it away. He alleged corruption in the development authorities and equated it to the exploitation of the people in Sindh.

“Those who accuse the JI of seeding hatred and ethnic-based politics need to know that the PPP and the MQM have not spared any slot for this nefarious type of politics in the political arena of Karachi,” he said.

Rehman also accused the PPP of making attempts to create a divide between the Sindhis and the Mohajirs.

He said JI MNA Akbar Chitrali had already submitted a resolution in the National Assembly for a separate chapter in the constitution for local bodies, and it would be a test case for all political parties, including PPP, MQM, and PTI, to respond to the resolution.

The JI leader said their struggle would continue till the law was repealed because a mayor without any monetary or administrative powers would not be able to deliver.

“The PPP has ruined all institutions in the province; 49,000 public sector schools have been destroyed in the province. From the chief minister to the bureaucracy in the province, not even a single individual would like to get their children admitted to the schools.”

He further stated that the JI had been staged protests for the people belonging to all areas of the country.

“Karachi is called mini-Pakistan because people from all ethnic backgrounds live in this city. The PPP should withdraw the law if it is serious and sincere about the megalopolis.”

While addressing the protesters, JI Karachi chief Hafiz Naeem-ur-Rehman said ministers belonging to the ruling PPP were issuing misleading statements to cover up their corruption in development authorities.

“PPP leaders Agha Siraj Durrani and Saeed Ghani should have come forward in the media to prove that the powers have been devolved to the local government setup,” the JI chief said.

Rehman said JI’s struggle was to resolve the problems of the people, and the PPP should not expect a friendly opposition from the JI — something it had enjoyed while dealing with the MQM.

“Contrary to the MQM, the JI has been opposing the politics of division since day one,” he said.

It is pertinent to note that on the sixth day of the protest on Wednesday, delegations of religious clerics, students, representatives of the school owners’ association, Association of Builders and Developers, and people affected by cooperative societies visited the sit-in to express solidarity with the protesters.

A large number of protesters showed an unshakeable resolve despite the fact that JI Karachi chief Rehman allowed the participants to leave the venue when heavy rains hit the venue of the sit-in at night.