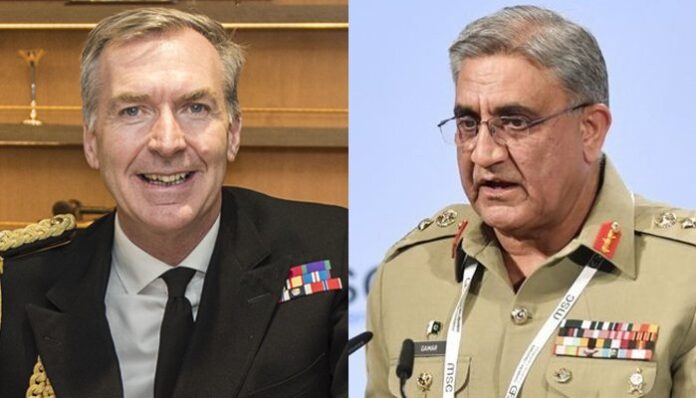 Chief of Defence Staff (CDS) of UK, KCB, and ADC, Admiral Sir Anthony David Radakin, was appointed to the post in October, and COAS Bajwa congratulated him for assuming the office during a telephonic conversation, according to the military’s media wing.

The Inter-Services Public Relations (ISPR), in a statement, said COAS hoped Radakin would play his role in further strengthening cooperation between the two countries.

During the call, matters of mutual interest including military cooperation, regional security, and the current security/humanitarian situation in Afghanistan were discussed, the ISPR said.

He stressed the urgency for devising an institutional mechanism for channelling humanitarian assistance to Afghanistan in order to avert a looming humanitarian catastrophe.

COAS Bajwa also reiterated that Pakistan wants cordial ties with all its neighbours in pursuit of regional peace and prosperity.

The British dignitary appreciated Pakistan’s role in the Afghan situation, role in regional stability, and pledged to play his part for further improvement in security cooperation with Pakistan at all levels, the ISPR added.