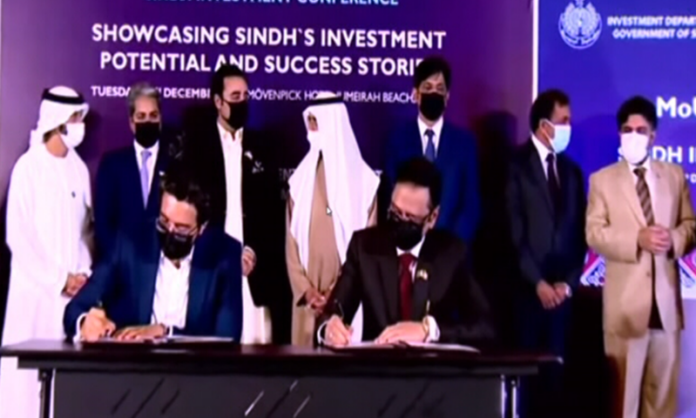 The conference had PPP Chairperson Bilawal Bhutto-Zardari and other PPP leaders, including Sindh Chief Minister Murad Ali Shah in attendance, and the agreements were signed in the presence of the United Arab Emirates’ (UAE) minister for tolerance and coexistence, Sheikh Nahyan bin Mubarak Al Nahyan.

As per the PPP’s official Twitter handle, the projects include initiatives for energy, water, sports and electricity generation from waste.

While speaking on the occasion, Bilawal stated, “We are particularly proud of the six MoUs signed before you today, which shows that this conference in the UAE has already been productive”.

“All of you must be aware that Karachi is facing huge water shortages and this is just the start in what we are hoping will be a lot more engagement with the private sector to work with us, to invest with us and to partner with the Sindh government to ensure that we can provide water to the people of the province, and the people in our [provincial] capital,” Bilawal added.

This, he said, was a “big step” towards the initiative of ensuring the provision of water to Karachiites.

Bilawal further stated that another MoU was signed for a waste-to-energy project, as garbage remained a big issue in Pakistan, especially in Karachi.

The PPP chairperson said an agreement was also signed for funding small start-ups and small-and-medium enterprises.

“We believe in supporting businesses, particularly small-and-medium enterprises, so this is also a positive development.”

He further stated that the PPP had promised to start water desalination in Sindh and the UAE had expertise in the area.

“The MoU signed today for the waste-to-energy [project] will go a long way in our quest for a greener Sindh and greener Pakistan and will add to our diverse energy mix,” he said.

Bilawal also announced that a football academy would be built in Karachi under one of the agreements inked on the day.

“Those of you who frequently visit Karachi know that this (football) is one of the most popular sports among the young people in the province, particularly of those in Lyari … I am so pleased that we are bringing positive activities for the youth of Karachi,” he said.

Bilawal went on to state that there had been complaints by the business community abroad and Pakistanis in the UAE, who were very keen to invest in Pakistan.

“But they get stuck in all the red tape … and all the layers of the government through which they have to interact [for making an investment],” Bilawal said, adding that an agreement had also been signed to ensure one-window operations for the Pakistani community in the UAE, who wished to invest in their home country.

“Going forward, they will not face complication and with this one-window access, they will invest and do business in the province with ease.”

Adding to that, Bilawal said the final MoU was signed for e-governance, “furthering the government of Sindh’s commitment to paperless governance”, while adding that this step would “contribute to transparency and help tackle corruption”.

“It is indeed a very positive development that modern technology is being included in the workings of the government.”

Bilawal concluded his speech by stating that all these agreements were “just the start of what should be a long-lasting relationship between the business community and the government of Sindh.”

The Punjaban song: Abrar-ul-Haq gets credit in Karan Johar movie

May 28, 2022
PARIS: World number one Novak Djokovic has said he would like to return to play in Australia again despite being deported from the country earlier...