CHT in Bangladesh towards peace and prosperity

1997 Peace Accord Paves The Way 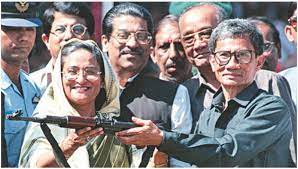 The Chittagong Hill Tracts Peace Accord was signed 24 years ago with the aim of ending the bloody clashes between the government forces and the tribes and hills men of the Chittagong Hill Tracts. After the agreement, it was hoped that if implemented, the economy would gain momentum. In the last 24 years, this hope has been fulfilled. The way of life of the locals has changed. Various development projects undertaken by the government have changed the economic condition of millions in the area.

Before the agreement, tourists were afraid to go to the hill districts. Tourists are now coming to the mountains without any hesitation as the security situation has improved. In the past, due to the underdeveloped communication system, there was not much speed in trade and commerce, but now that speed has increased several times. Before that, the wheel of normal life was closed for two decades. With the signing of the peace treaty, the hill country returned to its normal rhythm; In the contemporary regional and international arena, the successful political end of the CHT problem is considered a rare achievement for our country. For this reason, Sheikh Hasina’s UNESCO award was a recognition of Bangladesh’s unique contribution to peace.

The then Awami League government tried to establish lasting peace in the hill areas. This was followed by the surrender of arms in 1997, which later became known as the Chittagong Hill Tracts Agreement or the Peace Accord. The government claims that most of the clauses of the agreement have been implemented. And the unrealized clauses will be implemented quickly and it needs a conducive environment.

On the other hand, in the two decades after the peace agreement, several schools and colleges have been established, including Rangamati University of Science and Technology and Rangamati Medical College. There has been improvement in the communication sector. Sajeke in Baghaichari has been built for tourists with two-star quality hotels and a three-star quality tourist complex.

Earlier, fishermen could not fish in Kaptai Lake but now fishermen can fish as they wish. Fishing on Kaptai Lake has multiplied since the peace agreement. Kaptai Lake is playing an important role in the economy. Prior to the agreement, the government did not receive any revenue from this lake. Now the government is collecting revenue of around Tk 100 million every year. Thousands of families in Rangamati now depend on Kaptai Lake. Jhum (slash and burn) crop production has increased in the hills. Although it was difficult to get the jhum crop to the market earlier, it has been alleviated a lot now. In the past, most of the jhum crops would have been ruined on the way, but now there is not much of a search on the road, so hill farmers can easily sell jhum crops in the market.

The sector that has improved the most since the agreement was the timber business. The timber trade in the region has multiplied since the agreement. Although they did not buy tree gardens in the hills before, now traders are buying gardens. The gardeners are benefiting economically.

The necessity of implementation of the Hill Tracts Peace Agreement can be seen from the significant examples of successful conduct of various ongoing socio-economic development activities. However, the joint efforts of the hill-Bengalis are needed to implement the conviction to uphold the rights of all citizens as enshrined in the peace agreement

With the improvement in every aspect including education, communication and security, overall economic development has taken place in all the districts of the Chittagong Hill Tracts including Rangamati. Laxmidhan Chakma, a resident of Rangamati, said government jobs once seemed like golden deer to us. But as a result of the Hill Tracts Peace Accord, now the educated and meritorious children of the Hill Tracts are easily getting government jobs. It would never have been possible without the agreement.

After the Hill Tracts Peace Accord, the hill people were able to trade easily. The general public was intimidated by the obstruction of some regional organizations. But as a result of the peace agreement, the people of the hills are now breathing a sigh of relief. The people here are doing business independently with the incomparable cooperation of the administration.

There was a stagnation in trade and commerce in the hill country before the Hill Accords. Ordinary people could not move freely. But now that day is no more. Now people are doing business freely. The increase in communication has also given impetus to trade and commerce. The police administration is ready so that the people here can perform all their duties independently.

A rural road from Roangchhari Upazila Sadar to Ruma Upazila of Bandarban Hill District is being constructed. High-value spice cultivation project is being carried out in remote areas of Chittagong Hill Tracts.

Construction of a Chittagong Hill Tracts Regional Council Complex is being completed, as are two bridges over Sangu river and one over Sonakhali canal in Bandarban Hill District, and a master drain for development of drainage system of Khagrachhari district headquarters and removal of water blockage.

Apart from this, poverty alleviation projects through coffee and cashew nut cultivation in the CHT region and water supply and sanitation management projects in markets and adjoining areas of the Khagrachari district are also in progress. Establishing and implementing the network, which is currently the main hub for access to basic social services to the people of the three hill districts of Rangamati, Bandarban and Khagrachari.

The Chittagong Hill Tracts Peace Accord recognized the special status and dignity of the hill people. Under the peace agreement, a regional council comprising local government councils of the three hill districts has been formed. The structure of the Regional Council is as follows: Chairman 1, Member (Indigenous) 12, Member (Indigenous) Female 2, Member (Non-Indigenous) Male 6, Member (Non-Indigenous) Female 1. The agreement calls for the formation of a Ministry of Tribal Affairs to oversee activities related to the Chittagong Hill Tracts, headed by one tribe. If the land ownership rights of the tribes are determined then their land will be returned. For this purpose, a land survey system will be conducted in the Chittagong Hill Tracts to determine the ownership of land.

Today there are educated young people in every house of the tribal people. At least one employee per household, Chakmas has an average literacy rate of 96 percent. The quota system in all jobs including BCS, priority system, a quota system for tribal students in all universities, medical colleges, scholarships in Europe, America, Australia- all together the development of tribal people in the Chittagong Hill Tracts is much better than any remote region of Bangladesh.

Incumbent Prime Minister Sheikh Hasina is always striving to fulfill the hopes and aspirations of the people of Chittagong Hill Tracts. The present government has not taken any undemocratic and anti-people initiatives in the hilly areas. After the Awami League government came to power, the chairman of the Chittagong Hill Tracts Development Board was appointed. The formation of the Land Commission and the Minority Cultural Institutions Bill 2010 has been passed in the National Assembly. In the meantime, everyone has accepted the idea of tribes, minorities, ethnic groups and communities to protect the integrity of the country. We think that supporting and supporting Sheikh Hasina’s efforts to establish peace is essential for development there.

The necessity of implementation of the Hill Tracts Peace Agreement can be seen from the significant examples of successful conduct of various ongoing socio-economic development activities. However, the joint efforts of the hill-Bengalis are needed to implement the conviction to uphold the rights of all citizens as enshrined in the peace agreement.