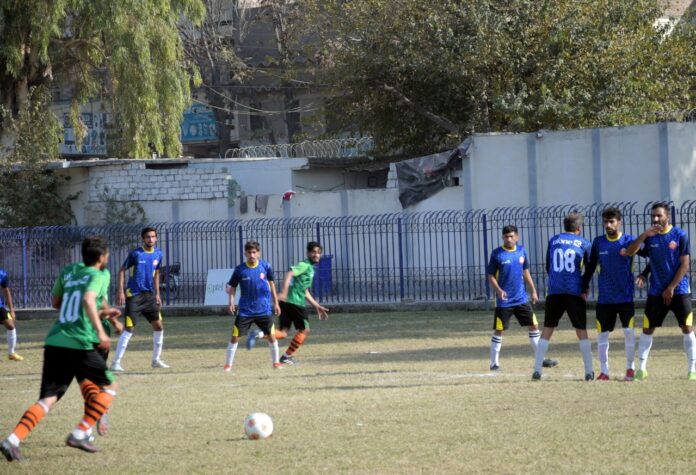 PESHAWAR: The iconic Tehmas Khan Football Stadium in Peshawar was rocked by thunderous applause and cheering from the crowd as DFA Charsadda and DFA Chitral registered impressive wins against their opposition in the Ufone 4G Khyber Pakhtunkhwa Football Cup to qualify for the Semi-Finals of the tournament.

DFA Charsadda faced DFA Abbottabad in the first match of the day, with both eyeing the coveted slot in the Semi-Finals. The teams were equal match for form and vigor and appeared unstoppable in their pursuit of glory. DFA Charsadda player Zaid scored his team’s first goal in just 3 minutes into the match, which was equated in the 6th minute by DFA Abbottabad’s Yasir.

DFA Charsadda player, Saif consolidate his team’s position by scoring another goal in the 8th minute, while Zaid went on to seal the fate of the opposition by scoring two more goals that include the final goal at the 70th minute to clinch a win by 4 to 2.

Yasir from DFA Abbottabad returned for another goal in the 55th minute but his team fell short and bowed out of the tournament.

The second match of the day was played between DFA Chitral and Aatish Tank. The two teams showcased exemplary defensive and offensive tactics; however, being equal match of one another for the footballing prowess, they failed to impact the scorecard.

The ball didn’t see the net on either side during the entirety of the match, which was decided on penalty strokes. DFA Chitral ultimately emerged as the better side by downing Aatish Tank by 4 penalties to 2 to proceed to the Semi-Finals. Today, December 09, DFA Karak will face DFA Mardan while DFA Bannu will meet Waziristan Combined for the coveted Semi-Final slots.

The winner will be the ultimate Champion of Ufone 4G Football Cup 2021. The Semi Finals, Final and Super Final matches will be broadcasted live on PTV Sports and the official social media channels of Ufone 4G.