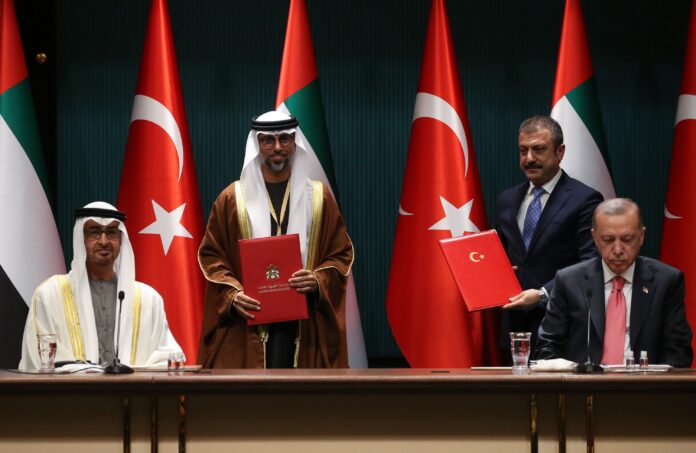 The tangible outcome of this meeting was the UAE announcement of the allocation of a $10 billion fund to invest in Turkey.

Coverage of this event in western media was loaded with judgmental diction and European media questioned how both countries can go for a sustainable relationship without solving their ideological and political differences over regional issues?

UAE and Turkish media called this meeting important and successful stating that UAE and Turkey are very clear that they share a similar outlook and have agreed on a range of important strategic topics. Both countries called that they have common interests, true commitment, and a shared vision for achieving peace and stability through prosperity collective.

Turkey and UAE diplomatic relations got derailed due to their major differences over regional issues including Arab spring, Syrian war, Libyan civil war, Muslim Brotherhood, and Qatar Embargo. The meeting of President Recep Tayyip Erdoğan with visionary Crown Prince Sheikh Mohammed bin Zayed Al Nahyan broke the ice as this was the first visit of Crown Prince to Turkey after 2012.

Turkey is also in a phase of normalization of its relationship with Saudi Arabia and President Erdoğan and Saudi King Salman bin Abdulaziz discussed bilateral ties by telephone, just before the November 2020 Group of Twenty summit. They agreed to settle disagreements through dialogue rather than escalate them with foreign-policy jabs.

I am amazed why foreign media is expressing surprise over this meeting? Do not we have Chinese –US and Chinese-EU models of trade that are beyond the boundaries of political differences? If US and China can exchange trade worth $310.3 billion in 2020 then why not Saudi Arabia can do the same with Iran or with Qatar? I have noticed that whenever Middle eastern countries try to shun off their difference for trade, a wave of articles and news appear in western media calling such positive developments “fluid”, “not tangible”, “politically impossible” etc. Such loaded diction creates doubts about any positive development taking place among Middle Eastern countries if they ever try to forget their differences and try to move on peacefully.

The rise of China in the 21st century has taught a lesson that Politics and Trade must not be linked with each other as they had been after the second world war that changed the dynamics of international relations. The world is no more divided into blocs created after World War II when national security and the nation’s survival were based on bloc formation.

We remember after World War II, the World was divided into different blocs, mainly between the two—the Capitalism and Socialism/Communism and countries pledged their allegiance to only the countries including that in particularly bloc but this arrangement is now a bygone era along with the philosophy of Communism.

The structure of Post-WWII international relations created hegemonies and waged wars, led to economic downfalls of many vulnerable economies because they lived a life of a slave neither they were able to form mutually beneficial alliances nor they were capable to break the bloc’s code of “brotherhood”.  Good or bad, beneficial or non-beneficial, one bloc countries contained their thick and thin within the bloc.

In the cold-war era, even weaker countries were dragged into high-risk international politics for being a part of a bloc. Political dialogical differences never allowed beneficial trade between non-allied countries. Countries trapped in monopoly games and hegemonic cynical propaganda, fed-up with this controlled contrived situation.

However, the late 70s and early 80s changed the scenario altogether when the bloc-based Chinese economy came out of isolation and decided on economic reforms and trade liberalization. Announcing to break away from “ism” oriented trade politics, China went through free-market reforms in 1979. According to Chinese government statistics, by 1979, China’s real GDP grew at an average annual rate of 6.7% from 1953 to 1978; providing a solid base for the competitiveness of the open market economy. The tagged pricing and quality of Chinese products were good enough for capturing the global market.

Almost the same time when China entered into the open market economy, the leader of the Communist bloc, the former Soviet Union was struggling for political and economic survival and by 1991, it lost its geographical identity and the world saw the historic fall of the Berlin Wall as well as Fall of Communist bloc. One of the major causes of the death of the Soviet Union was its faulty economic structure that could not allow the reach of Soviet products to international open marker rather it was confined only within Soviet and socialist bloc. President Putin once said that supply (production of goods) could not be stopped to keep people on their jobs while demand (the market) was very limited and the quality of goods was of Soviet standard not for the global competitive market.

After the collapse of the Soviet Union in 1991, the unipolar world emerged and now the United State was the sole unchallenged power. Soon the US went for an exodus of “Boots on foreign soil” and a series of US invasions started with Operation Desert Strom in Iraq and recently ended (or maybe halted) in Afghanistan. When the US was busy bombing different countries with a slogan of “saving humanity and providing them freedom”, China was reaching US markets. Uni-polarity looked redundant, outdated, and failed miserably to pace with the 21st century as the US faced a trade deficit of $255,438 million with China in the first 10 months of 2021 and US Think Tanks are claiming that US trade, industry and economy have become a slave of Chinese supplies.

The 21st century has come up with a message to all that economic relations have another mostly ignored plus point—the power of Public Diplomacy. Trade Diplomacy and People to people connections can become a massive force to resolve conflicts and subdue differences. Economic engagement could be the best possible way to bridge the politico-ideological gaps by listening to each other more and learning more about each other.

The rise of China in the 21st century has taught a lesson that Politics and Trade must not be linked with each other as they had been after the second world war that changed the dynamics of international relations. The world is no more divided into blocs created after World War II when national security and the nation’s survival were based on bloc formation.

Turkey-UAE economic agreement breaks the myth that for mutually beneficial trade for the sake of greater good involving parties must be aligned politically. Turkey and UAE have decided to take prosperity as a gateway to resolve mutual differences.

I’m writing this letter to you to focus on a serious social problem which the people of our area have been dealing with for...
Read more
Comment

AT PENPOINT The blast at Lahore raised a number of spectres, the most worrisome being that the USA has once again abandoned Pakistan to face...
Read more
Comment

What is Autism Spectrum Disorder (ASD)? According to the medical experts, ASD is a developmental disorder that affects communication and behaviour. Although autism can...
Read more
Comment

The Indian Ocean Region encompasses a vast area that is 5.5 times larger than the total area of the USA. Whenever we talk about...
Read more
Editorials

Most of the political parties of Sindh have rejected the Sindh Local Government Act (SLGA) 2021 for failing to empower the grassroots organizations. While...
Read more
Editorials

The figures from the Economic Affairs Ministry for debt incurred in the first half of the current fiscal year show that the government is...
Read more