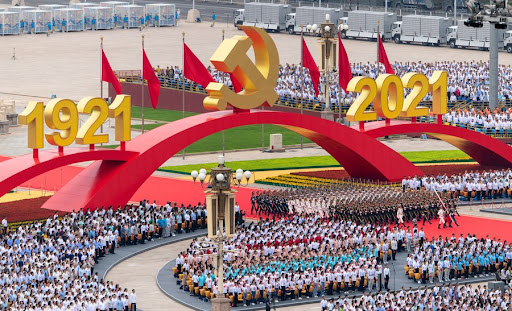 2021 5s the 100th year of the foundation of the Communist Party of China, wh5ch was formed by Chen Duxiu and Li Dazhao on 1 July 1921 with the help of the Far Eastern Bureau of the Russian Socialist Democratic Labour Party (olsheviks) who, after the revolution of 1917, seized power in the country. For long, beginning in 1927, it fought a civil war against the Kuomintang and ultimately became victorious in 1949 and formed the government on 1 October, the same year.

The long war of the party was fought under the leadership of Mao Zedong, who driven the then Kuomintang Nationalist Government from 0 ainland China to Taiwan and cleared the way for the establishment of the authoritarian Marxist-Leninist one-party state in the country, wh5ch also controls nation’s armed forces, the People’s Liberation Army (PLA). The party never allowed the system to conduct any general election like other democratic governments of the world, but maintained its own democratic centralism, the principle formulated and propagated by Vladimir Lenin who believed in open discussion and policy of agreed decisions. In principle, the highest powerful body of the Chinese Communist Party is the National Council whose meeting is convened every five years and when it is not in session, the Central Committee is the highest body wh5ch normally meets once in a year. However, in regular functioning of the party, the Politburo and its Standing Committee members are seen as the top leadership of the party who get its assigned works done through different committees, but the leader of the party is its supreme leader.

Currently, the supreme leader of the party is Xi Jinping who was elected in the 18th Central Committee held on 15 November 2012.

Originally, the official ideology of the Chinese Communist Party, as its name Indicates, is Marxism-Leninism mixed with Chinese characteristics, which includes the political thoughts of Mao Zedong, Deng Xiaoping and Xi Jinping. It surprised the world in 1978 when it adopted economic liberalisation and opened its door for foreign investors 6n a large scale and gave the plea that the country is in the primary stage of socialism and it is a developmental stage similar to the capitalist mode of production. Adoption of economic reforms in view of global trends replaced the earlier mode of command economy and opened the door for socialist market economy.

In course of time the Chinese ruling party has learnt a lot since the collapse of Eastern European communist governments in 1989-1990 as well as the dissolution of the USSR in 1991 and strengthened its relations with both communist and non-communist parties of the world and specially in the post-Mao phase it converted into an ideological concept of socialism with Chinese characteristics with emphasis on reforms and opening China for world market. Deng Xiaoping, who became supreme leader of the party in 1978 after the death of Mao in 1976, also left some patterns of Mao’s economy and introduced new inputs to move the country forward. As a result, although he faced an aggressive protest which climaxed in 1989, the protestors were crushed and by early 1990s and the concept of socialist market economy was introduced with its inclusion in the CCP constitution in the year 1997. In the context he was clearly of the view that a socialist state could use the market economy without being itself capitalist. In addition to economy, there also became some changes in style of leadership and, in place of a veteran revolutionary background, leadership was being selected largely on rules of promotion, retirement, educational background, managerial and technical expertise

Xi initiated the Belt and Road Initiative (BRI), to help the poor and developing countries of the world and promote the level of human index at large for which he also faced criticism from across the world. It’s a very popular and dream project of PRC, indicating its might and global strategy as well

To a large extent, the economic reforms that commenced in 1978 which soon followed other socio-political changes in the country, were significant not only for the region but for the globe as a whole. It fully modernized the country and provided Beijing a huge flow of investments mostly from Western and European countries mainly because China is most populous nation of the world which contains a vast market for consumer goods, cheap and skilled labour, smooth law and order and pro-business environment made available by the government of the day to keep the country strong and forward-looking. As a result, in the last 3-4 decades, China has left many countries of the region and the globe behind in the nation’s most valuable sectors, making it a strong contender of the United States of America with only a difference of 1.5 in economic capability.

In a further move as part of Jiang Zemin’s nominal legacy, in the year 2003, the Chinese Communist Party (CCP) made a revision in the party’s constitution and included three guiding ideologies to encourage the party to represent; a. advance productive forces, b. progressive course of China’s culture, and c. fundamental interest of the people. In the coming days the leadership team of Deng and Hu Jintao, unlike Mao, focused on collective leadership rather than on one-man dominance of the political system.

However, over the years, the emphasis on economic development led to a wide growth of allied social and political problems and for whose address two ideological concepts-scientific outlook of development and harmonious socialist society were introduced. Once again, China was ready to move in upgraded direction and it showed the Change of leadership in 2012 during the 18th National Congress which replaced Hu Jintao, the general secretary of the CCP, and in his place, eleced tXi Jinping CCP general secretary and Chairman of the Central Military Commission (CMC).

Born on 15 June 1953 and son of a veteran Chinese Communist, Xi Zhongxun, Xi Jinping is presently holding thre posts, as the General Secretary of the Chinese Communist Party, Chairman of the Central Military Commission and President of the Peoples Republic of China since 2013, after having experience of serving on number of party posts. Just after being elected to the post on 15 November 2012 he made a new team in the Politburo and Standing Committee of the country, and immediately started an anti-corruption campaign and within three years in office, initiated several cases against former party and government officials who were charged with involvement in corrupt practices.

In affairs of foreign policy, he initiated the Belt and Road Initiative (BRI), to help the poor and developing countries of the world and promote the level of human index at large for which he also faced criticism from across the world. It’s a very popular and dream project of PRC, indicating its might and global strategy as well.