India makes Bangladesh’s part of the Teesta river into a dead canal! 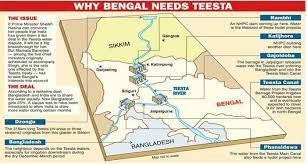 It is India which is a very self-realist state in South Asia. Self-proclaimed as the world’s largest democracy, India has no respect for the rights of its neighbours. India knows only taking from others, doesn’t know giving to others. For example, India has been deceiving Bangladesh for many years. India didn’t sign its promised ‘Teesta water-sharing agreement’ with Bangladesh’ from 1983. India always says that it will sign the treaty with Bangladesh immediately. But it is 2021.

Teesta, this famous river that came to Bangladesh after crossing the border, was once young forever. Settlements have sprung up in large areas including Bangladesh’s Lalmonirhat, Nilphamari, Rangpur, and Kurigram, around this river. The world-famous Bhavaya music tune has been created in a match with the livelihood of the people in the region and the flow of the river.

But the Teesta is no longer known. It is sitting to die from being weak. During the monsoon season, the river only has water for a couple of months. And before the rains end, it turns into a dead canal. This time the Teesta has become waterless before the end of the Bengali month of Bhadra

Above all, India has made the Teesta River into a dead canal. India always talks about human rights, democracy. But I say that it is a mockery, deception, pretension. First, India should leave these bad habits, then it should talk about moral ethics

India is getting an opportunity to cultivate in the dry season by diverting water through the Ghazaldoba Barrage to the irrigation canal. And as a result, Teesta is dying day by day in Bangladesh due to a lack of water.

Vast chars (river island) have arisen in the heart of the river. The Indian government is controlling the normal flow of the Teesta by building dams. As a result of the unilateral withdrawal of water, this river in Bangladesh has dried up and is now dying.

Meanwhile, in the dry season, India withheld water, but in the rainy season, all the gates of Ghazaldoba Barrage were opened to control the water level. As a result, large areas of several districts around the Teesta in Bangladesh became flood-prone. Houses and cultivable lands were washed away by the floods.

According to the Water Development Board (Paubo) of Bangladesh, the 400-km long Teesta River flows through India’s Sikkim and Darjeeling-Jalpaiguri in northern West Bengal, Lalmonirhat in Bangladesh, Rangpur through Chilmari in Kurigram and joins the Brahmaputra River at 124 km.

According to the Dalia office (Paubo) in Bangladesh, in 1977, the Bangladesh government adopted a plan to build a barrage, head regulator, and closure dam on the Teesta River. When the matter came to the notice of the Indian authorities, they built a 921.53-meter-long barrage at Ghazaldoba in Jalpaiguri (63 km upstream from Bangladesh). Through this barrage, India is irrigating its agricultural lands with 80 percent of the total water flow of the Teesta.

Dalia Paubo, an engineer, said the remaining 20 percent of the water was released downstream into India, but after crossing a distance of 63 km, the current became very weak on the way to the barrage area in Doani point in Bangladesh. He said that at a time when India was closing the gates of their barrages if a minimum of one thousand cusecs of water was supplied to the irrigation canal, there would be no way to release it downstream.

Ashwini (Bengali month of crop season) is without water: I visited the Teesta Barrage area of Hatibandha Upazila in Lalmonirhat on October 16 (in the afternoon) and saw that all the 44 gates of the barrage were closed. As a result, as much water as is available is diverted to the Teesta Irrigation Canal. As a result, the main river is almost waterless. This time Teesta seems to have become waterless at the beginning of Ashwini. Not far from the barrage is a vast expanse of char. On the other side, through a canal-like section, some water flowed downstream.

The water level goes down: People in the riparian areas say that as the depth of the river decreases, floods occur in large areas during the monsoon season. Buildings, including the houses, were washed away.

On the other hand, due to the lack of water in the river during the dry season, there is an irrigation crisis in the riparian areas while the groundwater level is going down and the water in the tube wells does not compensate. Meanwhile, the farmers are counting the losses year after year as they are not able to irrigate due to lack of water, even after cultivating various crops including potatoes in the char lands.

River researcher and director of the Riverine People (a rights organization in Bangladesh) Tuhin Wadud said, “The Teesta is a very good river compared to other rivers. Occupancy pollution is relatively low here. But the river is dying day by day as India unilaterally withdraws water year after year. In this situation, the implementation of the river water sharing agreement has become very urgent.”

Nazrul Islam Haqqani, president of the Save Teesta River, Save the Struggle Council, said, “The Teesta River is the lifeblood of the Rangpur region. But that river is now dying. We have been agitating for a fair share of water for a long time and will continue to do so. Besides, I think the implementation of the Teesta master plan in the government’s plan should be expedited.”’

Above all, India has made the Teesta River into a dead canal. India always talks about human rights, democracy. But I say that it is a mockery, deception, pretension. First, India should leave these bad habits, then it should talk about moral ethics.