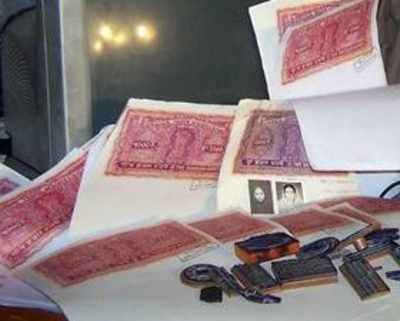 ISLAMABAD: Margalla Police has registered a case against the accused who made fake stamp papers of valuable lands of the citizen after completion of an inquiry. The inquiry against the accused was conducted by Additional Deputy Commissioner Revenue (ADCR), Islamabad. A case has been registered by Israr Ahmed in Margalla police station. He said that in order to acquire his valuable property, Muhammad Almas, Tariq, Haq Nawaz, etc. obtained a partnership stamp of 2005 about which the petitioner neither signed nor gave a thumbs impressions. When he became aware of his participation in the valuable lands, then move a application to Additional Deputy Commissioner Revenue (ADCR) to enquire the matter, the stamp seller Sheikh Bilal appeared in inquiry and replied to the ADCR that the stamp number 4419 was issued to Tariq at the REQUEST of the dealer while Israr Ahmed did not put any signature or thumb print on it. After the completion of the inquiry, a case has been registered under the provisions of the constitution.

ISLAMABAD: Islamabad Capital Territory (ICT) administration has withdrawn its No Objection Certificates (NOCs) for public gatherings inside the limits of the city being held...
Read more
ISLAMABAD

Hey sellers, how often have you wished for a place where you can take your car and sell it on the spot? Hey buyers,...
Read more
ISLAMABAD

18,000 raids conducted to check prices of daily use items in Rawalpindi

RAWALPINDI: District administration conducted nearly 18,000 inspections during last week in four districts of the division to check prices of daily use items. According to...
Read more
ISLAMABAD

ISLAMABAD: Expressing solidarity with the orphan and kids in need, students demanded the elders to protect the rights of the children as well as...
Read more
- Advertisment -

December 5, 2021
Instructor pilot Qazi Ajmal's body has been found three days after his gyrocopter crashed in the Awaran area of Balochistan on Sunday. It is pertinent...