The caste system is balanced by affirmative action 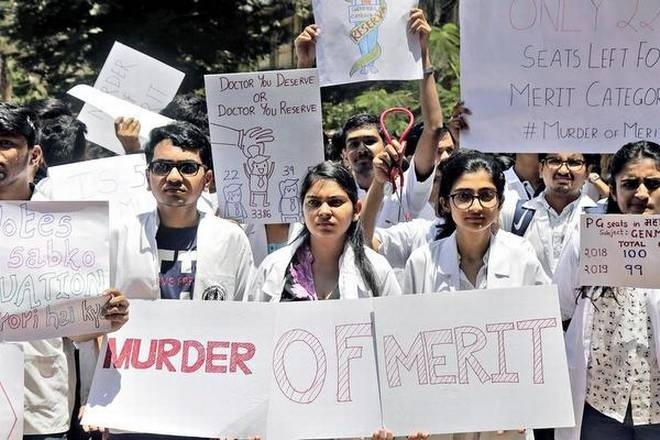 A system of reservation or affirmative action is not uncommon to the world community and found in one way or the other in most of the countries of the globe, as the United Nations Convention on the Elimination of All Forms of Racial Discrimination, held in 1969, maintains that the principles of equality sometimes requires states to take affirmative action in order to diminish or eliminate conditions which cause or help to perpetuate discrimination in society and as such prevalent in the USA, the UK, China, Canada, Brazil, Finland, Germany, Japan, Israel, Malaysia, Norway, Romania, New Zealand, South Korea, South Africa, Sweden, Sri Lanka and a host of others, however, what is unique is its basis-caste, although in general, affirmative action refers to a set of policies and practices within a government or organisation seeking to include particular groups based on their gender, race, sexuality, creed or nationality in areas in which they are unrepresented or underrepresented, especially in education and employment.

The nature and extent of reservation also varies from region to region and country to country, ranging from a hard quota to merely targeting encouragement for increased participation. While under a quota system a certain percentage of government jobs, political positions, and school vacancies must be reserved for members of a certain group, in others the political system of the time boosts, and motivates the unprivileged to compete with the other on merit and status, a concept accepted historically and globally to achieve goals such as bridging inequalities in employment and pay, increasing access to education and redressing apparent past wrongs, harms, or hindrances.

The Constitutional Amendment Act passed in 2019, by amending Article 15 and 16 of the Indian constitution and with reference to Article 143, provide for a 10 percent reservation in education and government jobs in India for Economically Weaker Sections (EWS). Thus, of the total government jobs under central and state governments 59.50 percent have been reserved, with a caste basis for 49.50 percent while 10 percent for EWS, leaving only 40.50 percent of seats to be allocated on open merit

In independent India, caste has been made the single basis of reservation because historically the people were known as rigid social groups characterised by hereditary transmission of life style, occupation and social status. Although it has its origin in ancient India, it continued in a transformed form in medieval, Mughal and British periods.

The oldest concept of Varna, which literally means type, order or class, was largely a framework, first used in Vedic Indian society. It divided the whole society in four different parts on the basis of works done by them. traditionally as Brahmins, Kshatriyas, Vaishyas and Shudras.

At that time the word ‘Jati’, meaning ‘birth’ was least heard despite the existence of thousands of jatis and wwa not applied universally due to  caste being more flexible and diverse than we often assume. Over centuries, caste became popular and was decided based on religion; ritual ranking existed within the jatis, however, an important role was also played by economics, politics, and geography, thus ultimately making it a loosely knitted framework.

In the later developments after the collapse of the Mughals and the rise of the British colonial government, the term caste was popularised as the British began to give several concessions on caste-based rules. Earlier, the downfall of the Mughal period witnessed the rise of many powerful men who associated themselves with kings, priests and ascetics affirming the regal and martial form of the caste ideal and it also reshaped many apparently casteless social groups into differentiated caste communities. In the British Raj too, the process of reshaping the caste continued further making the caste system more rigid in an organizational form and a central mechanism of administration.

It flourished specially between 1860 and 1920, when the British formulated the caste system into the system of governance by giving mostly administrative jobs and senior appointments to Christians and selected castes. When after the 1920s social unrest increased in proportion they initiated the policy of positive discrimination by reserving certain percentage of government jobs for the lower castes and after independence of the country the reservation for Scheduled Castes and Scheduled Tribes, was incorporated in the constitution of the country by making first amendment in the year 1951.

Thus, throughout the period Jatis have existed in India among Hindus, Muslims, Christians, and tribal people with no clear linear order among them. Presently, there are four types of reservations prevalent in India of which three are caste-based and the last one is on the basis of economic backwardness, for the Economically Weaker Section (EWS) having 10 percent reservation by passing the 103rd Amendment Reservation, implemented in 2019.

On attainment of Independence the first instruction regarding reservation was issued on 21 September 1947 which provided for 12.5 percent vacancies to be reserved for Scheduled Castes in open competition and in others it was 16,2,3 percent while in another resolution dated 13 September 1950, five percent reservation was provided for Scheduled Tribes. Again, it was revised in the light of the census report which registered their population at 14.64 percent and 6.80 percent respectively, the percentage of their reservation increased from 12.5.and 5 percent to 15 and 7.5 percent according to a notification issued on 25 March 1970.

On the other hand, the Other Backward Classes (OBCs) are described in the Constitution of India (Article 340) as socially and educationally backward classes which comprised roughly 52 percent of the total population as mentioned in the Mandal Commission report of 1980 and are entitled to get 27 percent reservations in public sector employment and higher education as per a decision of the Supreme Court of India delivered in 1992.

The list of OBCs is maintained by the Indian Ministry of Social Justice and Empowerment but their number still remain fluctuating because of inclusion and removal of certain castes and communities from time to time, it however, is effective like the reservation of SCs/STs, in all recruitment to public sector undertakings, both under the central and state governments along with nationalised banks.

In another significant development, the Constitutional Amendment Act passed in 2019, by amending Article 15 and 16 of the Indian constitution and with reference to Article 143, provide for a 10 percent reservation in education and government jobs in India for Economically Weaker Sections (EWS). Thus, of the total government jobs under central and state governments 59.50 percent have been reserved, with a caste basis for 49.50 percent while 10 percent for EWS, leaving only 40.50 percent of seats to be allocated on open merit.