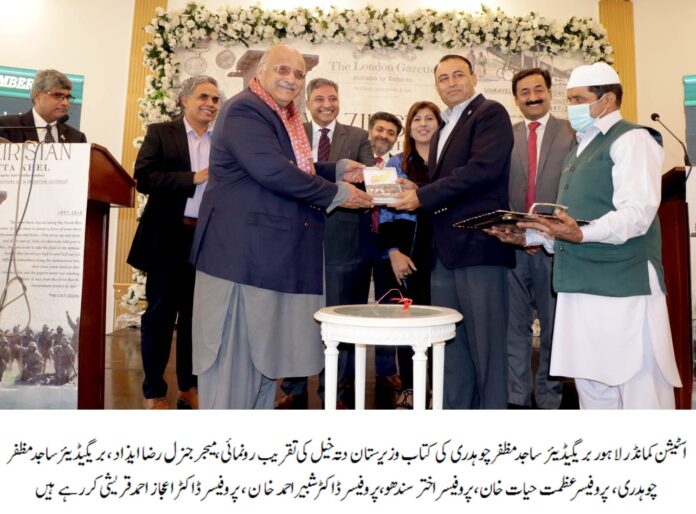 LAHORE: A book launch ceremony for the launch of Brigadier Sajid Muzaffar Chaudhry’s book titled ‘Waziristan: Datta Khel Unravelling the History of a Frontier Outpost 1897-2018’ was held at the Defence Service Officers Mess (DeSOM) in Lahore on Saturday.

The book was dedicated to the officers and men of the Pakistan Army, the Paramilitary Forces, and Pakistani citizens.

Introducing the book Professor Sabir Ahmad Khan said that the book was based on empirical data since the author had himself served as a soldier and administrator in Federally Administered Tribal Areas (FATA) and Waziristan.

“This laborious effort gives valuable insights of the fascinating history of the land and people of North Waziristan while also elaborating on the contemporary developments of the era of war on terror specifically in Datta Khel.  It elaborates on the struggle, hardships and the loss of human lives faced by the Pakistan Army during its struggle to root out terrorism and establish writ of the state in the area,” he said.

“You must know that all along the North-West Frontier of India there is spread a force of some thirty thousand foot and horse. They move up and down, and down and up from one desolate little post to another they are ready to take the field at ten minutes’ notice; they are always half in and half out of a difficulty somewhere along the monotonous line: their lives are as hard as their own muscles, and the papers never say anything about them. So wrote Kipling more than a century ago about the British Indian North West Frontier, capturing its everlasting romance. At British India’s partition in August 1947, this frontier became the North Western Frontier of the newly independent Pakistan. The mystique associated with this area continued for a long time till the era of Talibanization in 2001 and the subsequent war on terror. I have a long association with the erstwhile Tribal Districts including Waziristan as a soldier and administrator and my deep insight as well as love with the land and its people is amply reflected in the book. I wrote this book while serving in Datta Khel, North Waziristan and it is a valuable addition to the scarce literature on the area in contemporary times,” said Brigadier Sajid Muzaffar Chaudhry while talking to Pakistan Today.

He is proficient in many languages including Punjabi, Urdu, English and Persian. Coming from a distinguished military family, the author joined the Pakistan Army in 1990 and has seen active military service spanning over 28 years.

He has served extensively in the erstwhile tribal areas of Pakistan, and has a special interest in Pakistan Army’s operations related to war against terror. He has worked extensively on terrorist narratives and formulation of counter narratives, post conflict rehabilitation and perception management.

A woman who was allegedly raped by three men in Lahore has withdrawn her case on Tuesday, stating the first information report (FIR) registered...
Read more
HEADLINES