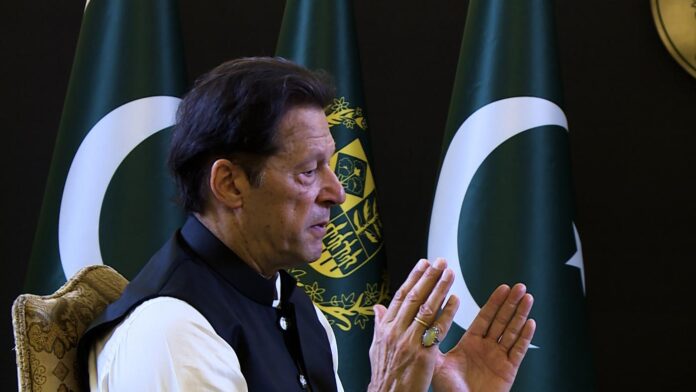 Addressing the Pakistan-Saudi Investment Forum in Riyadh, Prime Minister Imran Khan on Monday acknowledged the significance of improving ties with India, but sarcastically commented that after what happened in the T20 World Cup, a day earlier, it would not be ‘a good time” to think about this.

The PM went on to state that “We have excellent relations with China, but if somehow we improve our relationship with India — I know after last night’s thrashing by the Pakistan team in the cricket match, it’s not a very good time to talk about improving relations with India.”

PM Imran went on to say that Indian-occupied Kashmir is the only major issue between the two countries.

“It’s all about human rights and the rights of the people of Kashmir for self-determination as guaranteed by the United Nations Security Council 72 years ago.

“If that right is given to them, we have no other problems. The two countries can live as civilised neighbours […] just imagine the potential”, he added.

While highlighting Pakistan’s strategic location, the PM said that Saudi businessmen could benefit from what the country has to offer.

He mentioned the Ravi Riverfront Urban Development Project and the Central Business District project and called for investors to invest in them.

He also mentioned another project along the River Indus with 300,000 acres of fertile land. He said that water was available, but a canal was required to water the land. “All we need is energy to lift that water in a canal and this whole area becomes cultivable.”

He said that the project had immense opportunities for both the countries.

PM Imran while concluding his speech said that he wanted relations between the two countries to go to another level. “A level that will benefit both the countries.

“The advantages that Pakistan has are different to the advantages Saudi Arabia has. Therefore, if we come together, it will mutually benefit both the countries.”

On the other hand, Prime Minister Imran Khan stressed that the international community needs to work pragmatically to preserve peace and security, prevent an economic collapse and avert a humanitarian crisis in Afghanistan in a meeting on Monday with American politician and diplomat John Kerry.

The Taliban-run government in Afghanistan faces isolation as countries have yet to recognize their regime since they took over after ousting Ashraf Ghani in mid-August.

Kerry, the United States’ Special Presidential Envoy for Climate, and the prime minister spoke on the sidelines of the “Middle East Green Initiative (MGI)” Summit in Riyadh.

The premier is in Saudi for a three day visit — from October 23-25.

During their meeting, the prime minister underscored the need for positive engagement and the release of seized economic resources and financial assets for the welfare of the Afghan people.

The premier underscored the importance of a peaceful and stable Afghanistan for Pakistan and the region.

Speaking about climate change, the prime minister stressed the need to reinforce national as well as global emphasis against what he described as an existential threat.

The prime minister shared his perspective with the special envoy on challenges faced by Pakistan and other developing countries due to climate change, while highlighting Islamabad’s experience of launching nature-based solutions to address environmental challenges, including the 10 Billion Tree Tsunami project.

Reviewing the ongoing collaboration between Pakistan and the US on climate change and environment, PM Imran Khan expressed satisfaction on the recently held inaugural meeting of the “US-Pakistan Climate and Environment Working Group” which explored potential areas of bilateral Pak-US cooperation on climate action.

Kerry said the Pakistan-US relationship should be further reinforced in areas of mutual convergence, including climate and environment.

ISLAMABAD: The Supreme Court has asked the federal government why did it feel need to file a contempt of court case against PTI chief...
Read more
NATIONAL

ISLAMABAD: Islamabad High Court (IHC) has reserved its verdict in Senator Azam Swati’s plea seeking details of cases registered against him across the country. At...
Read more
- Advertisment -

December 2, 2022
ISLAMABAD: The Supreme Court has asked the federal government why did it feel need to file a contempt of court case against PTI chief...